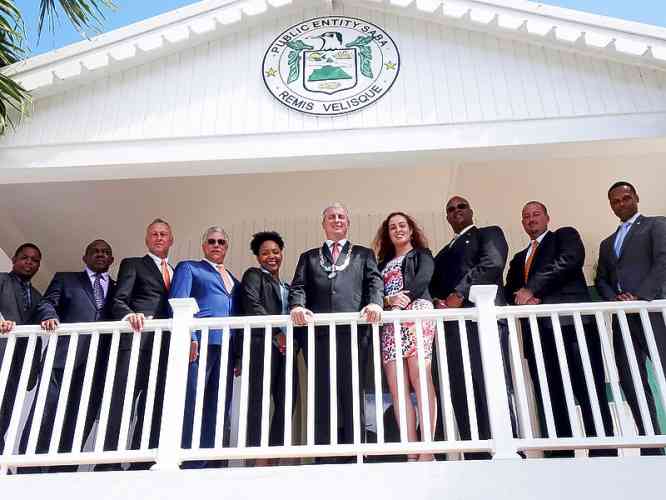 Members of the new Island and Executive Councils of Saba gathered on the balcony of the Government Administration Building in The Bottom on Thursday.

In total, the Island Council met three times on Thursday. The first meeting, at 10:00am, was the last meeting of the 2015-2019 Island Council. The meeting started with the reviewing of the credentials of the five incoming Island Council members by a three-member committee consisting of Monique Wilson, Heyliger and Buncamper.

After the vetting and approval of the credentials, it was time to bid farewell to outgoing Island Council members Ishmael Levenston and Wilson, both of the Saba Labour Party (SLP). Levenston was not present for health reasons. Wilson gave her farewell speech.

“Many say they feel sorry for the SLP, but we accept no pity. We claim strength, because I feel overwhelmingly proud that I served my island being true to you and to myself, never once sacrificing my position for wrongdoings. And, let us never forget Ishmael Levenston and the unselfish work he gave for the people of Saba. A genuine people’s politician who cares for you more than he did for himself.

“Our time for political war has ended. Let those whom you have appointed serve our island with unbiased honestly, dignity and respect to ensure we continue to prosper as your only opposition leaves the building,” said Wilson.

Chairman of the Island Council Island Governor Jonathan Johnson thanked Wilson and Levenston for four years of good working relations. He referred to Levenston as a “unique figure in our politics,” having been an Island Council Member five times, always reminding the government of its responsibilities towards the people.

Zagers said that winning all five seats did not happen very often, with the last time being 40 years ago. “The mandate given to the WIPM party proves that the people of Saba appreciate and support a stable, proven government.

“Today, I can state with full confidence, as President of the WIPM party, that we will take this mandate very seriously. I can assure you that we will serve. We will lead. We will at all times have the best interest of Saba and her people at heart. Most importantly, we will not let you down,” he stated.

About the lack of opposition Zagers said: “Some people have expressed concern over the fact that the WIPM now holds all five seats in the Island Council. However, during the last four years, the WIPM Island Council members were at times even more critical than the elected opposition.

“I am confident that although there is no elected opposition, our WIPM Council members will do the job that has been entrusted unto them and they will ensure that the integrity of government is held to the highest possible standard and that the rights of our people are protected and defended.”

Island Council member Charles echoed Zagers’ sentiments. “Having all five seats is no small feat. It means we have a big responsibility to ensure that democracy is upheld. We will do so. I am not here to sing in the choir, but to preach.”

Zagers and Rolando Wilson only remained Island Council Members for a few hours, because they resigned during the third meeting at 2:00pm. The new Island Council unanimously voted in favour to appoint them as Commissioners.

The Island Council then moved to review the credentials of the two new Island Council Members. Van Xanten first took the oath, followed by Johnson. Then it was the turn of Zagers and Wilson to take the oath as Commissioners.

Van Xanten and Johnson gave their inaugural speeches in which they thanked their voters and gave an outline of the important issues that they want to tackle in the coming four years.

Johnson, at 21 years the youngest Island Council member ever, pointed out that history repeated itself. In 1979, her grandfather David Johnson was also a member of the Island Council when the WIPM secured all five seats.

“Today is another historic day, and I am proud to be part of a victorious party, and being the only female Island Council member. I hope that my involvement in the political area will encourage more women and youngsters to join,” she said.

Van Xanten announced his first priority would be the medical referrals of the Caribbean Netherlands Health Insurance Office ZVK.

“I am sure that as Island Council, with the support of the Executive Council, this issue will be discussed very soon. This can be our first example to show the people how this magnificent team will cooperate, compromise and decide unanimously. There is no room for dictatorship. But that does not mean that things will be taken for granted,” said Van Xanten.

The two newly appointed Commissioners also gave speeches in which they promised to continue working hard in the best interest of the Saban people and the island’s development.

“Our door will always be open for everyone,” said both Zagers and Wilson.

“This is a victory moment, but it is also a sobering assignment to carry out the work with dignity and hard work. I will continue to do so and to champion the cause of the Saba people,” said Wilson.

Zagers said he looked forward to continuing to work on the many policies and ongoing and new projects. “Leading the discussions with the Netherlands on our quest to alleviate poverty is obviously a priority for this upcoming term. And, we will continue lobbying for more autonomy as we continue to prove that our administration is capable of taking on additional responsibilities,” he said.

There was a fourth meeting at 4:00pm, this time to officially install the Electoral Committee. This Committee comprises five members: Zagers, Van Xanten, Rolando Wilson, Buncamper and Monique Wilson. After their credentials were reviewed, the five members took the oath. The Electoral Committee will gather for a second and last time on May 27 to cast their vote for a Member of the First Chamber of the Dutch Parliament.