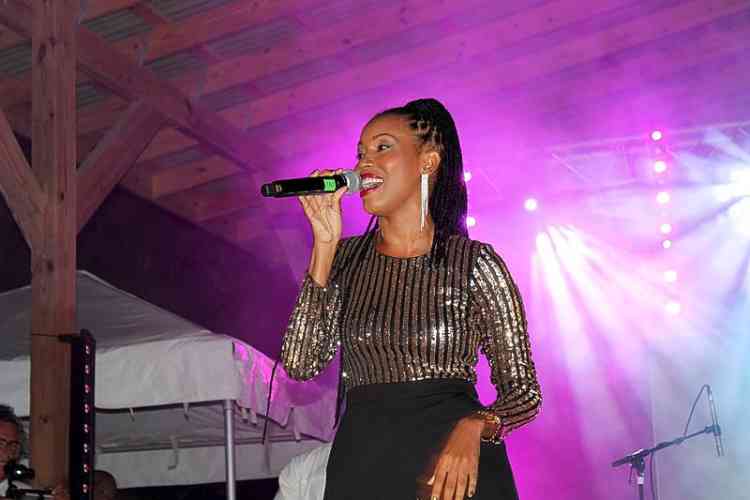 Singer Malaïka Maxwell is one of the personalities delivering a poignant message on road safety in the videos. (Photo Robert Luckock)

MARIGOT–A new road safety awareness campaign has been launched on social media in another effort to make young people aware of the dangers of excessive speed and reckless behaviour on the roads.

The latest initiative comes from Aldrich Benjamin, President of Dr. Fire Entertainment and Hubert Fleming, who have collaborated on filming short videos in French or English, using well-known personalities in the community to spread a message on safety.

Carollo has been out of action for well over a year, and came close to having his leg amputated following a motorbike accident in Marigot that was the fault of a driver making a sudden turn without indicating. The videos are produced by Dr. Fire Entertainment.

Given the high number of fatal accidents involving scooters or motorbikes, the campaign is aimed at those riders, but also car drivers. The messages are the same: where a crash helmet and protective clothing, don’t drink and drive or take drugs while on the road, wear your seat belt, don’t text and drive, keep your speed down and obey speed limits (speed kills), overtake only when it is safe to do so, follow the rules of the Highway Code, and respect other drivers, etcetera.

Association secretary Hubert Fleming said there are more ideas in the works to continue spreading the awareness, for example bumper stickers, posters, putting signs on the roads and talking to young people in the schools.

“The idea to do this came from Aldrich after he lost two persons very close to him in fatal accidents, one in French Quarter and Nacio Arrindell,” explained Hubert. “He said we had to do something. We are getting a very good response from the campaign so far. Some of the video clips are getting up to 10,000 views. We have done five and there are three more to do.”

He added: “We also want some Dutch-side personalities to get involved. There’s no border on this one. This is everybody’s business. We are also planning more campaigns around holidays and Christmas, especially when it’s party time, and we want to collaborate with the TV stations, such as IOTV and MSR.”