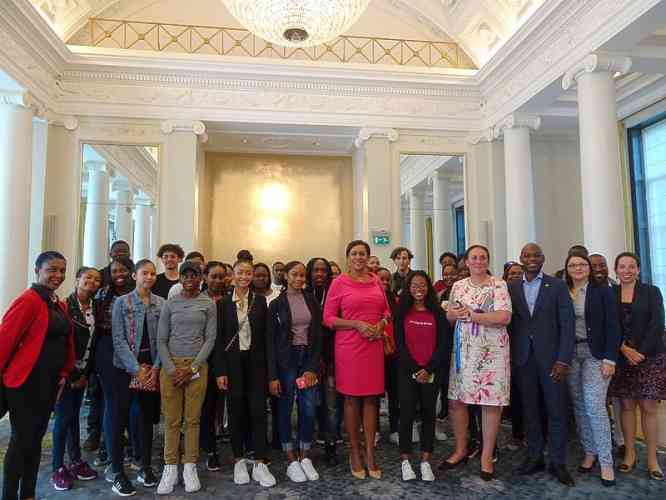 One of the three groups of students during the scavenger hunt. (Suzanne Koelega photo)

THE HAGUE–Some thirty St. Maarten students, who recently came to the Netherlands for their tertiary education, took part in an informative, introductory event on Tuesday, organised by the Cabinet of St. Maarten Minister Plenipotentiary Jorien Wuite. The students obviously enjoyed the scavenger hunt, the games and the highlight of the day: a visit to the Council of State and its former palace.

The initiative was Wuite’s. “When the new students arrived, I got the spontaneous idea to suggest such an event. For the students, it is an opportunity to get together, to do fun things and to learn about their new surroundings. For us, it is an opportunity to show them the cabinet, to explain what we do and to introduce them to The Hague,” she told The Daily Herald.

It was decided to not only invite the recipients of St. Maarten study financing, but to also ask the so-called free movers, those students who came on their own to the Netherlands, to be a part. “We see an increasing number of free movers, and it is important to also include them. This also fits in our motto: For and with St. Maarteners. Free movers encounter the same challenges as St. Maarten study-financing recipients and it is our task to be there to help them all,” Wuite said.

After being received at the Cabinet of the Minister Plenipotentiary late Tuesday morning, the group was split up in three smaller groups for the scavenger hunt. The scavenger hunt gave the students a good impression of “political The Hague,” the location of the ministries, the Second and First Chambers of the Dutch Parliament, the “Binnenhof” and the “Buitenhof.”

“And now, you have come to join us, to study, to find and better yourself, to explore what the world has to offer and what your role could be in it. You too are ambassadors of our Sweet St. Maarten Land. I urge you to be aware of that and to wear that badge with honour, because being a St. Maartener means that, regardless of the fact that we have a long way to go, and that change will have to come, we have a lot to be proud of.”

Van der Sluijs-Plantz warned the students, or as she called them “St. Maarten Talent Class 2019”, it won’t always be easy. “It is not going to be clear sailing all the way. You will experience ups and downs and you will have bouts of tears and laughter – that’s called life. And, probably for the first time, you are out there on your own and you will have to deal with that all on your own. That’s called growing up.”

Van der Sluijs-Plantz offered some practical advice to the students. “Be social, be visible, mingle. Get out of your comfort zone, meet new people, explore what the world has to offer, learn from other cultures, learn other languages and travel whilst in Europe.”

She encouraged the students to get to know themselves. “Learn to enjoy and embrace time alone with yourself. You don’t always have to have someone right there. Read, listen, learn, write, find your role models and your voice; learn what it is that you want in life, what your values are and what you stand for.”

Be focused and be disciplined in daily life, work and study, was her fourth main piece of advice. “Embrace diversity and change, always be curious; always be positive. Always be passionate about what you do, always be inclusive and always be forgiving. Find a good balance between humility and pride.”

Lastly, she told the students to make the most of their life adventure. “Make sure to have fun at everything you do and follow your heart. Believe in yourself and always remember, you are braver than you believe, stronger than you seem and smarter than you think. Almost every successful person begins with two beliefs. First, the future can be better than the present, and second, I have the power to make it so.”

After the address by Van der Sluijs-Plantz, the group of students were shown the former palace where King Willem II and his wife Princess Anna Palowna lived many years ago. The former palace is now part of the Council of State. Especially the ballroom, the grand hall and the explanation of Communications Officer Wendy van der Sluijs made an impression on the students.

The group then went back to the cabinet to eat, to play a dominoes game, to listen to a pep talk of Calvin Brooks and Jeffrey Richardson, and to enjoy the large park in front of the Cabinet, Malieveld.