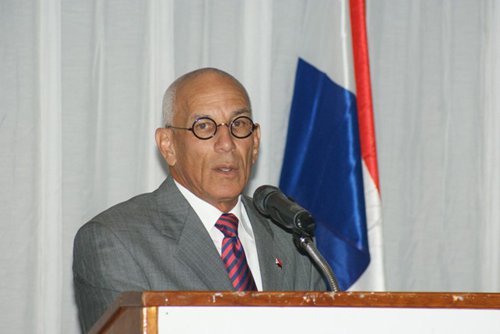 PHILIPSBURG–Former Winair Chairman Michael Ferrier reacted to the news of young businessman Rolando Brison’s appointment as Director of the St. Maarten Tourism Authority (STA) on Friday, stating that Brison had embezzled a substantial amount of money while employed at Winair.

Ferrier stated on Sunday, “Rolando Brison, a young St. Maarten professional who, as per his own admittance in writing, embezzled a substantial amount of money from the Government-owned airline Winair, one of his previous employers.”

Brison, in an invited comment, denied Ferrier’s allegations against him and said, “I saw the comments by Ferrier and I must say I’m very sad that he would choose this historic time for young people in St. Maarten to slander me. I remain undeterred and remain excited about being the director, and I will seek legal advice on how to address his comments made against me.”

In a lengthy statement to the media on Sunday, Ferrier continued, “Winair’s management agreed not to press criminal charges against Brison if he resigned of his own free will and agreed in writing to repay the airline the total amount of funds he ‘misappropriated.’

“Four years and four months later, Brison has yet to start paying back Winair, but gets employed by Government to, amongst other things, manage and direct the spending of hundreds of thousands (if not millions) of guilders that will be allocated to the SXM Tourism Authority for the promotion of tourist destination St. Maarten. What happened to background checks and/or thorough vetting?”
In practical terms, the fact that “the STA will begin to market the island” means that Brison will have a say in how tourism funds will be spent.

“I have retrieved copies of documents related to the Brison case that substantiate my claim. If St. Maarten is going to have a fighting chance to ‘make it’ as a country within, or outside of, the Kingdom of the Netherlands, we are going to have to vote-out the bums, convicts, scoundrels and opportunists and keep/vote in professionals that have true passion and love for our island and who are prepared and willing to give, at a minimum, an honest eight hours of work, five days a week,” stated Ferrier.
The purpose of the STA is to assist temporarily in carrying out the tourism policy of the Government of St. Maarten as a tourist destination; to support the growth of St. Maarten’s land- and sea-based tourism by providing the public and private sectors with focused, sustainable and productive marketing; and the enhancement of the visitor experience.

Ferrier continued, “It’s more likely that these upstanding professionals will earn the extremely generous salary and lucrative benefits our Parliamentarians and Ministers enjoy. One thing is sure, we need to make an effort to secure that each professional that is appointed to top-level, important positions with impact on the growth of our economy has a clean record and is capable of doing their function. The fleecing of the limited financial resources of our country must stop.”