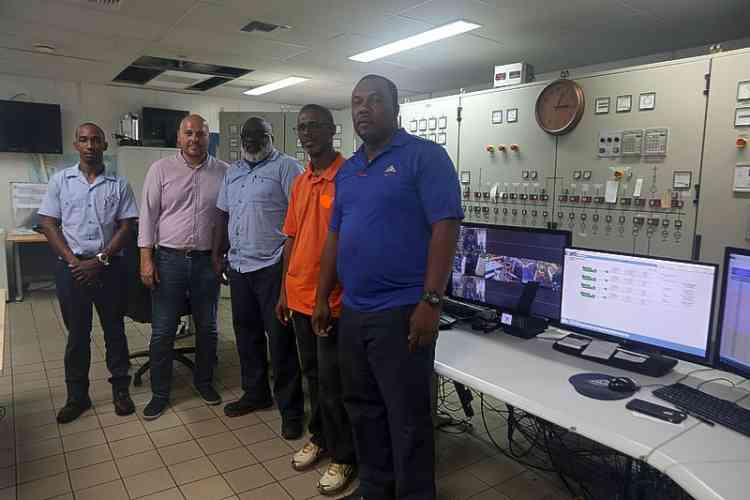 CAY BAY–Just days before the second anniversary of Hurricane Irma, which devastated the island on September 6, 2017, newly-sworn-in Minister of Public Housing, Spatial Planning, Environment and Infrastructure VROMI Chris Wever praised three utilities company GEBE employees as “heroes” for keeping the power plant operational until 6:00am on that dreadful day.

The three men were trapped inside a bunker-like structure that houses the control room for all GEBE’s generators for nearly 48 hours before they could leave. During this time the storm’s winds surged on the outside, destroying homes and businesses, including two of GEBE’s structures that housed four engines.

Stephen James, Enacio Illis and control room supervisor Wayne Jeffers told Wever during a visit to the power plant in Cay Bay on Saturday, August 31, that they had thought nothing of the work they did, as it was what they were trained to do.

They were thrilled that for the first time in St. Maarten’s history, residents were kept out of the dark for a very long period into a hurricane despite the high wind and waves.

GEBE chief executive officer (CEO) Kenrick Chittick, who gave Wever a guided tour of the facility, said the company’s investment in new air-cooling technology for the engines was one of the reasons GEBE had maintained its power supply during the storm.

He said GEBE previously had used water from the nearby sea to cool the engines. The problem with this water-cooling system was that when the sea level rose, the waterlines became clogged with debris. This often led to overheating that meant having to shut down the engines to prevent extensive mechanical damage.

Wever said the news of these men’s heroism was very touching and he had to meet the men and thank them personally.

“As a St. Maarten resident who benefited from having electricity for such a long period, I have to say ‘thank you’ on behalf of the citizens of St. Maarten,” said Wever on Saturday. “These three men’s bravery and dedication kept the power supply online. Because of that, residents had access to radio and television and use of their telephones to communicate with their families.”

On the morning of September 6, 2017, the three men saw the destruction taking place outside their doors via closed-circuit television (CCTV) cameras installed at the power plant. They were forced to shut off power when the roofs of the engine rooms blew off, causing what appeared to be fire and excess smoke.

The smoke and fire were not their only concerns, as they had to continuously monitor the power grid to see whether there were interruptions, as this could have spelt danger for residents who might have been exposed to broken power cables.

The men were trapped inside the building and could not communicate or get home to their families for more than 24 hours. The shift system operated by GEBE also required that a colleague relieve them before they could leave the control room. According to the three men, if the roofs of the engine rooms had remained intact, they would have kept the power on for longer.

Chittick told Wever that GEBE had learnt some valuable lessons from Irma. They presently have Wärtsilä, the company that designed the engine rooms, providing significant repairs to the buildings. Once Wärtsilä completes the repair work, two more engines will go online, giving the company added power to supply St. Maarten.

With the new state-of-the-art system in place, the controllers can switch power lines within moments of identifying a broken power line. They can identify areas where there are spikes in electricity in real time and can see where the load is increasing or decreasing in certain areas.

This connectivity is now possible using fibre optic cables connecting each switch in St. Maarten to the control room. A large panel was used to provide information and control the power grid in the past, but the old analog system provided less information and was less accurate. The old system is now on display at the entrance of the control room as a reminder of how much GEBE has grown in terms of technology.