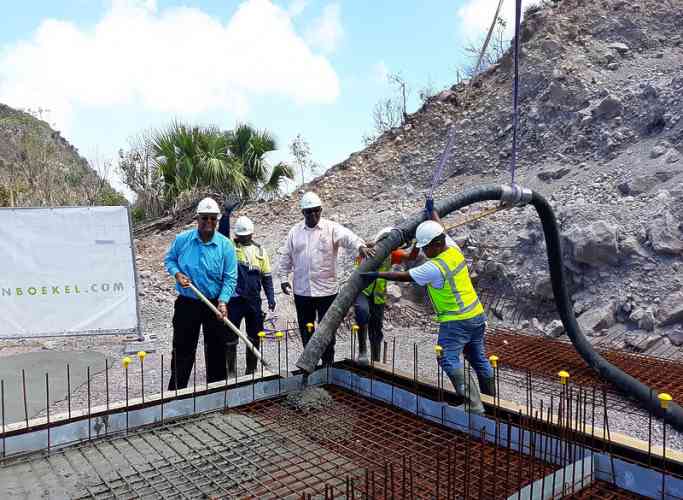 Commissioner of Social Affairs and Housing Rolando Wilson (centre) and OYOHF Technical Director Eviton Heyliger (left) assist in pouring the concrete floor for the cisterns of the Under the Hill social housing project.

SABA–With the pouring of concrete for the floor of the cisterns of block C of the Under the Hill social housing project in The Bottom on Tuesday another step was taken in the realisation of eighteen new low-cost homes.

Commissioner of Social Affairs and Housing Rolando Wilson and Own Your Own Home Foundation (OYOHF) Technical Director Eviton Heyliger assisted in pouring the concrete together with workers of main contractor Van Boekel.

Block C is part of phase two of the Under the Hill project: it is one of three buildings that will house 18 one-, two- and three-bedroom apartments.

The construction at this location is a rather complex matter that involves major excavation due to the very steep hill. The project has not been without challenges because of the large number of boulders having to be excavated. The groundbreaking took place early December 2018. The project should be completed late 2020.

The public entity Saba has transferred 18,000 square metres of government-owned land to facilitate this project, which is important for persons in need of low-cost housing.

The public entity Saba is the principal for the infrastructure for this project. The European Union, through the ninth Economic Development Fund (EDF), contributes with US $3.2 million. The infrastructural works entail the roads, the cisterns and foundations.

Woonlinie housing corporation of the Netherlands is the principal and financier of the homes. An amount of some $3.3 million is involved in the construction of the houses themselves. OYOHF will manage the houses and rent them to the tenants.