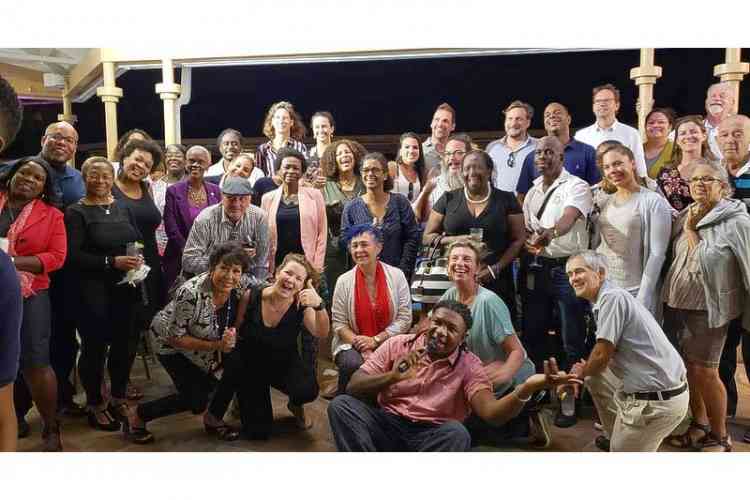 Representatives of more than 40 organisations pose for a photo at the World NGO Day event on February 27.

~ Foresee Foundation aims to unite organisations in a community network ~

PHILIPSBURG–Representatives of St. Maarten’s strongest and most active non-profit and non-governmental organisations (NPOs and NGOs) attended a World NGO Day celebration at Divi Little Bay Resort’s Seabreeze Restaurant on February 27. The attendees also witnessed the official launch of Foresee Foundation’s latest project “NPOwer,” which aims to unite all of St Maarten’s NGOs and NPOs in a community network to collaborate and further strengthen already powerful stakeholders in St. Maarten society.

Foresee (4C) Foundation is a local non-profit organisation with a board consisting mainly of young St. Maarten professionals who returned to St. Maarten after obtaining their degrees in the USA and Europe. The education-oriented foundation launched its first project, known as “DigiKidz,” in 2014, when three primary schools were equipped with state-of-the-art technology infrastructure and devices.

This was followed by, among other things, the construction of the media lab in Philipsburg Jubilee library, DigiTeenz at Milton Peters College and St. Maarten Academy, two educational conferences for 1,000 educators, and a US $150,000 post-Hurricane Irma relief grant for educational organisations early 2018.

The foundation shifted its gears in early 2017 to focus on the support of NPOs, seeking to assist in capacity-strengthening and other means of support.

Following Hurricane Irma, non-profit NGOs took the lead in giving immediate relief to those in need. Many NPOs/NGOs served as the beating heart of the community after the devastation and many international relief organisations came to the island looking to partner with strong local organisations. Foresee Foundation received a grant from the Dutch Disaster fund, which acknowledged the need for the implementation of this initiative.

Nevertheless, the lack of a practical up-to-date database of active NPOs/NGOs hampered the recovery after Irma in many ways, which is still being felt today more than a year after the hurricane. Because there was no central databank of information with an overview of which organisations were doing what, when, where and how, much time and energy was lost trying to make connections.

With more than 75 attendees representing 40 organisations at the World NGO Day event, Foresee and NPOwer sought, with a relaxed mixer, to compliment St. Maarten’s organisations on their hard work and for being a powerful force in the community. A collaborative technology-centred game served as an icebreaker at the start of the evening, followed by a presentation by Project Managers Melanie Choisy and Allison Deher, two young persons who are no strangers to St. Maarten’s non-profit world.

Funded by the Dutch Disaster Fund, NPOwer’s objectives include being able to establish a complete online database of all active NGOs and NPOs on the island, as well as introducing a number of interactive workshops aimed at supporting foundations and their missions. Information was gathered at the end of the event with a quick needs assessment survey, which NPOwer would like any organisations that were not able to attend to fill out at

[email protected] or by reaching out via Facebook page