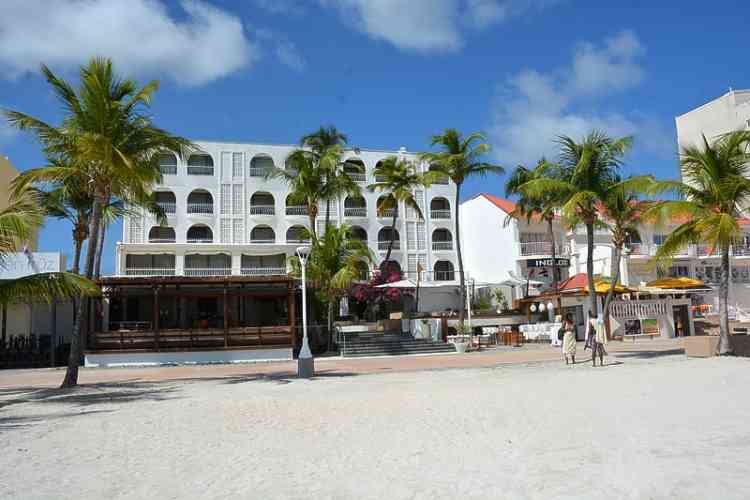 PHILIPSBURG–Not only a delicious three-course meal was on the menu, but also laughter and music were served at Holland House Beach Hotel last week Saturday for the National Institute of Arts (NIA) fundraising dinner.

The two Dutch musical entertainers flew in a few weeks ago to help the people of St. Maarten in the aftermath of Hurricane Irma. They started at the beginning of February teaching free musical theatre classes at NIA and cooking free vegetarian lunches and sharing them out on the streets to the people in need.

They had raised funds in Holland to be able to buy the groceries and to allow the children to join the musical theatre classes for free. However, when talking to Paul Boetekees, the idea came up to have a fundraiser for NIA and Animal Defenders Sint Maarten at Holland House, so both foundations could benefit more from their presence on the island.

As Joost and DJ have been singing and dancing in Holland for years they took the opportunity and made the fundraiser not only an evening of appetising food, but also of singing and putting the fun in the FUNdraiser. At this point, a student could not control her enthusiasm and beckoned Joost to hand over his microphone. Stacy-Ann joined Kristopher and magic was happening on the spot.

The gentlemen took a moment to explain why they were raising funds for the two foundations. The singing of Kristopher and Stacy-Ann proved that Art really does Heal and NIA directors Arlene Halley and Clara Reyes received warm applause from the guests for their countless efforts in using the arts as a form of relief for the St. Maarten people.

Also present were Mercedes de Windt and Mohana Ceasar with part of their team of volunteers. The gentlemen took the opportunity to address and praise them for their ongoing work benefiting the animals in St. Maarten.

The icing on the cake was when Minister of Education, Culture, Youth and Sport Jorien Wuite, who was present, surprised the fundraising party by addressing the guests and taking time to contribute inspiring words about the efforts of the two organisations.

The last set of disco music got the crowd dancing. With the help of Chef René, who served a delicious three-course vegan meal (because how can you raise funds for Animal Defenders, while eating animals at the same time), the evening turned out to be a great success and everyone left with full bellies and a joyous feeling.