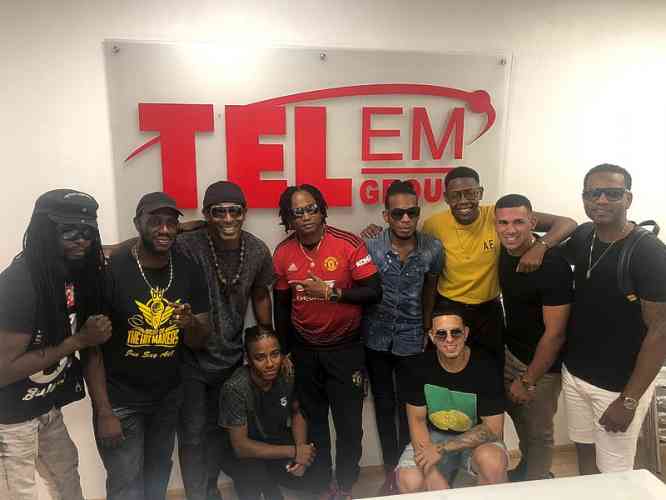 Hit Makers after a press conference on Thursday.

During a press conference on Thursday, the artistes expressed gratitude for being part of Carnival 50 for St. Maarten.

“This year, we intend to take the show to yet another level. Every year I am asked the same question: ‘How will you top this?’ Well, that question keeps me motivated. Being part of this year’s 50th Carnival celebration is an honour and we plan to make the Carnival magic happen at the seventh edition of TelCell’s Night of The Hit Makers,” Fleming said.

Speaking about the line-up, Fleming said there is no compromise. “My goal this year was to put a line-up together that will cater to a wide audience and suit the golden celebration of Carnival. Leading a show into J’ouvert morning is always a challenge and I knew we had to put a line-up together that would make the patrons dance straight into J’ouvert morning by keeping them excited from beginning to end,” said Fleming

He added that apart from exciting and innovative promotions, Xtratight Entertainment will maintain the format of the dance floor as in previous shows. “We will always make sure that people can utilise the dance floor for most of the night.”

For the 50th anniversary, Night of the Hit Makers is going to another level with the inclusion of the legendary zouk band Kassav. Kassav has been touring the world for years and is celebrating 40 years in existence this year. Known for its mega hit “Zouk la sé sèl médikaman nou ni”, Kassav has released more than 20 albums.

“I am proud to announce that ‘April 26 (St. Maarten)’ is a date on Kassav’s highly anticipated world tour agenda.

“Hit Makers’ formula is designed around the ‘vibe and the artiste’, the crowd feeds off the artistes and the artistes feed off the crowd. Also, this year, Aruba’s number one band Buleria will be performing for the first time at TelCell’s Night of The Hit Makers. Buleria in Papiamento would simply mean ‘Alegria! Rumba! Ambiente!’ The band possesses a tremendous synergy or brotherhood, which transforms into an energy that guarantees a vigour to move any crowd, young or old,” said Fleming.

He explained that the show had featured the best artistes from various places, especially Aruba and St. Maarten, during the past six years. Fleming said he listens to the people and brings the type of artiste that they want.

Another group for which fans have been screaming out loud is Edwin Yearwood and Krosfyah, who are also celebrating their 30-year milestone this year. Krosfyah is one of the most innovative soca bands to come out of Barbados, with some of the world’s biggest soca hits. It brings nothing but energy, ensuring to get revellers geared up towards Jouvert morning.

“This will be the ultimate dance party and the people can expect a great production as usual. We will be doing exactly what we say we are going to do, as we do not compromise. Our production, from start to end, will be programmed to make sure that the people are entertained and geared up to dance straight into J’ouvert morning,” added Fleming.

He thanked Hit Makers fans for their continued support as well as his Xtratight team for the success of the show each year. “The fans have continuously supported this event like it’s theirs, and it is theirs,” said Fleming. “I promote it like it’s theirs, from the discounts, cheap tickets (the Thingz Hard special). I also have some great partners along the way that make Hit Makers a success, because without them, none of this could happen.”

Tickets are US $50 tonight at the gate.