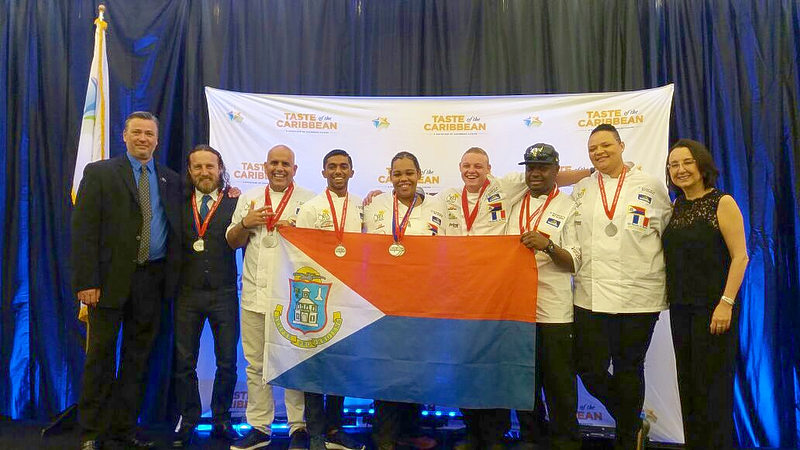 MIAMI, Florida–St. Maarten’s culinary continues to reign supreme with its many visitors and residents as well as food judges. That latter group was exposed to the delights from the country’s team of elite chefs and bartender and they awarded their taste and creativity with nine medals, including team silver in the Caribbean National Team Competition, at just concluded Taste of the Caribbean.

St. Maarten won team silver also last year. Prior to that, the team had won team gold in 2005. Each year, the culinary team has a mix of returning and new chefs. The one constant has been repeat gold medal winning bartender Paul Peterson of Temptation restaurant.

Peterson again brings home gold medals, two in fact: one for the best non-alcoholic drink and the other for best bartender. He was named Caribbean Bartender of the Year in 2006 and 2009. This year, his competitor from Barbados took that honour.

In the Caribbean Chef of the Year competition, Chef Dino Jagtiani of Temptation restaurant won silver. Chef David Cudicio who was not on the team this year won gold last year in this category.

The chocolate alchemy of Party Chef Ronald Estephane (Sonesta Maho Beach Resort and Casino) earned him a silver medal in the chocolate competition. Last year, he also won silver in the dessert competition, that time the challenge was a cheesecake.

Estephane also won bronze in the overall pastry competition same as he did last year.

Neighbouring Anguilla captured the Tony Mack Team Spirit award this year. This award was won by St. Maarten in 2016.