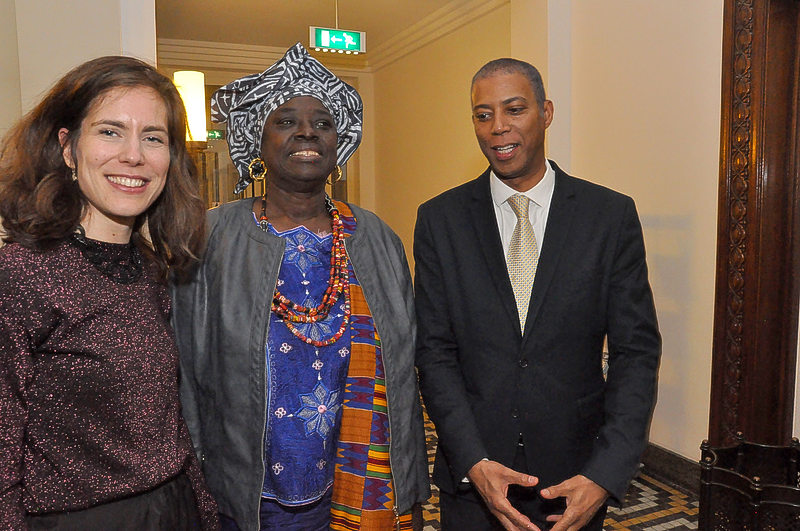 AMSTERDAM–With racism on the rise and the harsh public debate on black versus white issues, it is now ever more important to take a stand against racial discrimination and intolerance, agreed the speakers at the New Year’s reception of the National Institution for the Dutch Slavery Past and its Legacy NiNsee in Amsterdam on Saturday.

Amsterdam Alderman Simone Kukenheim of the Democratic Party D66 referred to the hate expressed on social media against Black Pete demonstrators and against aspiring politician Sylvana Simons of the Artikel 1 party. A debate which she said gave her “a belly ache.” “Racism surfaced frequently last year. Sometimes the Internet is a drain that makes the sewer looks nice.”

Kukenheim said she was proud of the people, and especially those living in Amsterdam, who fought against racism on a daily basis. “We should not allow ourselves to be set up against each other. We have to make that very clear. We become part of the same climate if we don’t do so. The feeling of discomfort about these difficult issues can never be a reason not to have honest discussions,” she said.

“Anti-black racism is a persistent evil that erodes the roots of a just and respectable society, and which has to be forcefully combated at all times,” said NiNsee Chairman Antoin Deul. “Anti-black racism is rooted in the Dutch history of colonial ruling, oppression and slavery. There is too little recognition and attention for the Dutch slavery past and the bitter heritage of this crime against humanity.”

Deul and Kukenheim lamented the harsh political climate nowadays. “It is clear that a different political wind is blowing in the Netherlands. Under the pretence of freedom of expression, irresponsible politicians and model figures in society have helped to create a climate which makes it possible to degrade and intimidate black people,” said Deul.

“These individuals get away with their racist remarks in the media, while peaceful anti-Black Pete demonstrators at the arrival of Sinterklaas on November 12, 2016 were arrested and criminalised en masse. The right of demonstration and freedom of expression of black people was violated in several areas in the Netherlands. The rights of black Dutch citizens must also be protected,” said Deul.

Alderman Kukenheim, who holds the portfolio Education, Youth and Diversity, clamoured for a more activist attitude of Amsterdam and its people against intolerance and racism. In her opinion, Amsterdam should not accept Party for Freedom PVV Leader Geert Wilders as the next political leader of the Netherlands.

“Wilders as our next prime minister may never have been so close, but the establishing of the republic Amsterdam is neither far away. Rebellion fits our city like a glove. It means that we, as a diverse and tolerant city, should not fear to contradict the national trend,” she said. Kukenheim made national headlines with her remark about Amsterdam becoming a republic if Wilders were to become prime minister.

Deul said the Netherlands still had “a long way to go” to truly become a country with equal opportunities for everyone no matter one’s race, gender, sexual preference or religion. “A country where our children are not judged by their colour or last name when they look for a job. A country of freedom and creativity with room for the acknowledgement of our slavery past, where there is room for a properly funded NiNsee and the establishing of an iconic black museum as a symbol of our shared past.”

Achieving that calls for leaders with a vision, said Deul. “Leaders who want to build an inclusive society where diversity is considered as a force and source of inspiration. Leaders who don’t go for electoral gain and don’t only say what worried citizens want to hear, but leaders who do what is just and make a statement when needed. That calls for understanding and willingness of white institutions such as politics, labour unions, education and the media to question the white privileges and to transform and decolonise the thinking.”

Vice-consul of the United States in the Netherlands Kharmika Alston spoke of the shared values between the US and the Netherlands where it pertained to black awareness. The US observes Black History Month every year in February, while the Netherlands had its first Black Achievement Month in October last year. “I would like to see this initiative expand,” she said.

Alston emphasized the importance of creating awareness of the scientific, social and cultural contributions of Afro-Americans. She mentioned several artists, scientists, scholars and movements that have greatly contributed to this awareness. She cited from the speech of US President Barack Obama at the opening of the Black History Month in February 2016.

Chairman Deul assured that NiNsee would keep the combating of racism on the agenda this year. The institute will do so through the second edition of the Black Achievement Month in October, the annual Emancipation Day commemoration and the Keti Koti Festival in Amsterdam on July 1, and the Tula commemoration on August 13 and 17.

NiNsee wants to give the Black Achievement Month a permanent spot on the culture agenda and slowly expand it to other cities. Last year, the event took place in four cities with the focus on Amsterdam. Education about the slavery past at primary schools will remain one of NiNsee’s objectives.

The funding of NiNsee has been a major issue in the past years after the Dutch Government terminated the annual subsidy. Though talks with the government have resulted in financial support in the format of project subsidy, the institute hopes to be able to secure structural funding this year.

Amsterdam has provided financial support to NiNsee in difficult times and will continue to do so. “There is enough to fight for,” Alderman Kukenheim said in reference to combating racism and creating more awareness for the slavery past. “NiNsee has proven to be a valuable partner.”