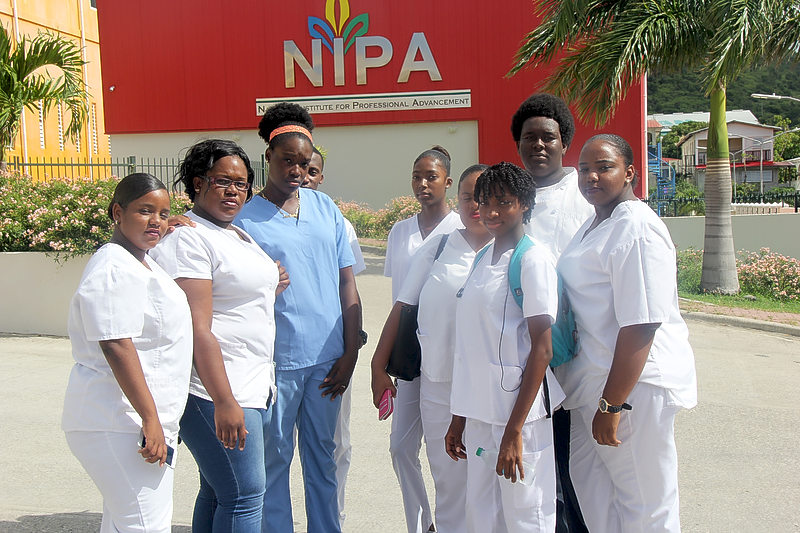 CAY HILL–With the threat of expulsion by the board of Advanced Vocational Education (AVE) which oversees National Institute for Professional Advancement (NIPA), six of the 23 Care programme students invited members of the media to the school in Cay Hill on Wednesday morning to hear some of their concerns in regard to the instability at the school.

The students said AVE chairman and NIPA interim director Antonio Aventurin had held a meeting at the school last week Thursday and informed them that former Director Tasheena Maccow-Thomas’ contract will not be renewed, as she scored low in her evaluation.

Students immediately asked whether there was anyone else who would be replacing Maccow-Thomas and Aventurin replied that he would be stepping in as director.

The students told the media outside the school that during the meeting they had asked more questions about the board’s sudden decision and had been told that as students they did not have the right to know those things.

The students said they even had asked whether they could speak to the media, because they said they know for sure that the school did not conduct any evaluation on Maccow-Thomas’ performance, but Aventurin informed them that if they approached the media they would be expelled.

The students had only good things to say about Maccow-Thomas, who had a hands-on approach with all students at the school. “We don’t understand, Director Maccow came to our class almost daily and asked if we needed anything. If we were missing materials she would fight with the board to make sure we get what we needed,” stated one student.

Maccow-Thomas worked as a social worker at NIPA for the past three years and was appointed director of the school six months ago. The group of students, who represented the entire Care group, said Maccow-Thomas had a way with students in general and they considered her their backbone and role model.

Long-time educator Rien Korteknie wrote in a letter to The Daily Herald on Wednesday that his employment at NIPA had ended on May 12.

“Unfortunately my relation with NIPA did not last ’til the end of the school year, so students might have serious difficulties to graduate. About six weeks before May 12 I realised there is a problem to solve and informed NIPA about the activities to deal with in Quarter 4, the final quarter of the school year, concerning Maritime 1.

“Preparation was needed to avoid unwanted situations. Also a serious problem concerning salary/contract had to be discussed. Unfortunately nothing happened until May 11. We were going to have a meeting. The meeting was delayed and even one hour later there was still no meeting, so I left. The deal was that I would get a call when the meeting could take place. Today, June 6, 2017. I still did not hear from NIPA,” stated Korteknie in his letter.

The students also said that former marketing officer Shameeda Weeks’ contract was not renewed and again when they asked questions they were denied information. As for former Executive Director Patricia Lourens, they said they just saw her disappear and up to this day, they do not know what happened.

The students wanted to share their frustration with the board and requested meetings to discuss these issues, but have been denied a sit-down with the board.

The students went on to state that Adjunct Director Garfield Sargeant, put in place together with Aventurin, does not know how to address students properly and has a bit of an attitude.

Minister of Education Silveria Jacobs said later on Wednesday, during the weekly Council of Ministers press briefing, that subsidised schools have school boards to manage them. However, she requested that the Inspectorate look into any issues at the school, as NIPA, among other schools, is checked frequently and reports are made and sent to her on an annual basis.

She said she would not condone labour disputes at the school being tried in the media.

“So far I did not receive any formal complaint from the staff or the students of NIPA, neither was I informed by the Inspectorate that there was a problem,” said Jacobs. She added that the situation right now is a labour issue, Human Resources at NIPA is dealing with the matter at hand, and as a Minister she cannot get into that until she receives a report from the Inspectorate.