Home Headlines & Top Stories No authority for Saba as yet to grant work permits | THE... 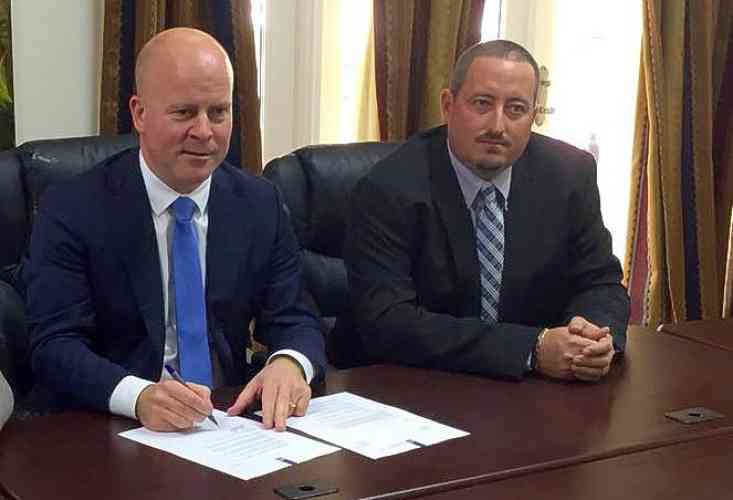 THE HAGUE/SABA–Dutch State Secretary of Home Affairs and Kingdom Relations Raymond Knops sent a letter to the Dutch Parliament on Tuesday about the work-permits procedure and the reduction of bureaucracy in Saba that seemed in direct contradiction to the Saba government’s endeavours to assume responsibility for granting work permits.

In the letter to the Second Chamber of the Dutch Parliament, he noted that Saba “currently did not have the specific need” to take over the authority to grant work permits. The Daily Herald understood that the Saba government had agreed to become more familiar with the processing of work permits in the coming months, but the local administration’s position still stood that it wanted to assume this authority eventually.

“The public entity has indicated to the Ministry of Social Affairs and Labour SZW that it is content at the moment with the practical solution for the issue regarding the time that it takes [to handle work permit requests – Ed.],” stated Knops in his letter.

According to him, Saba has proven its capacity in the area of good governance and financial management in the past years and the local government has shown that it should be allowed to gradually execute more tasks.

“I subscribe to this thought,” Knops stated. “Good governance has been a priority since my appointment and as you know I have the saying ‘more for more, less for less.’ I also operate in this manner where it concerns the transfer of tasks and responsibilities.”
Saba Commissioner Bruce Zagers stated in a reaction that the Saba government was appreciative of the attention and willingness shown by Knops and the Ministry of SZW to work within the existing guidelines to draft easier and less bureaucratic processes for the granting of work permits for Saba.

“Although we have discussed this proposed framework on a civil servant level with SZW, these measures in our opinion should be seen as a transition period. During this transition period it will allow for the Saba administration, together with SZW, to get more familiar with the processes with the ultimate goal being Saba taking full responsibility for the task and further reducing the waiting time,” Zagers told this newspaper.

“We agree with the state secretary that at this current moment we are not ready to take on full responsibility for the granting of work permits. However, having this task transferred under the principle of ‘more for more’ remains a priority for the Saba government. We are cautiously optimistic about the proposed new framework, as we will need to see how exactly this will work in reality.”

The talks with Saba regarding the work permits have been ongoing for a while, Knops noted in his letter, in which he described the procedure of granting these permits. The issuing of work permits requested by the employer takes place based on the Labour and Foreigners Law Wav BES, which serves to protect the local labour market, preventing local workers from being pushed aside and averting illegal employment.

The SZW unit at the National Government Service RCN on the islands is responsible for the issuing of work permits. An employer has to make an active effort to fill vacancies with local workers. Employers, the public entities and non-governmental organisations are critical of this procedure, which in their opinion is bureaucratic and time-consuming.
In the case of Saba, an evaluation has shown that locally there are no or hardly any suitable personnel available to fill the vacancies. In a very few cases the employer succeeds in finding a local employee. The law offers the possibility to forego the requirement that the employer make an active effort to find a local person for the job if it is clear beforehand that due to the specific nature of the position it will not be possible to find a local worker.

For Saba, this article has been utilised by reducing the term of five weeks to two weeks for certain positions. The SZW unit at the RCN has been asked to, together with the Saba government, give content to custom-fitting the execution so the work permit request can be handled more quickly and the vacancies filled more rapidly, explained Knops.
For certain vacancies with very specific tasks for which no local worker is available, the requirement of the employer to search on the local labour market can even be waived. Talks between the Saba government and the Ministry of SZW have started on this matter and the results will be included in practical work agreements that fit in the local context and the capacity of the public entity, he noted.

The role of the public entity Saba is also strengthened in other areas. The Ministry of Public Health, Welfare and Sports VWS has started a pilot project to transfer more tasks to the Saba government in the area of youth crime prevention. Since April 2018, the Saba government received a budget from the Ministry of VWS to give content to youth crime prevention for two years.

Another example of close cooperation and improving service provision is realising one window for social services. According to Knops, the Saba government has invested in the development of its internal organisation in the past years by strengthening know-how and capacity, by improving enforcement and supervision, and by establishing a social development service.

“The public entity has done so in its ambition to improve its own level of service and to do more on its own in priority areas,” stated Knops, adding that the Ministry of Home Affairs and Kingdom Relations BZK in 2017 had contributed to organisational development and improvement of services by making US $688,000 available for this goal. “In this manner, Saba is being enabled to execute the tasks even better,” he said.

Commissioner Zagers said the funding that has been made available by the Ministry of BZK for organisational development has been “very helpful” to strengthen the organisation as a whole. “We are grateful for this funding and we hope that this funding will continue. But ultimately it should become structural, as it is not wise to finance good governance with incidental funding,” Zagers said.

Knops ended his letter to the Second Chamber by making clear that the transfer of tasks and authorities would not be continued if the pilot programmes did not have the desired or intended results. The Dutch Parliament has been urging Knops to reward Saba for doing well by transferring tasks and authorities to the island government.