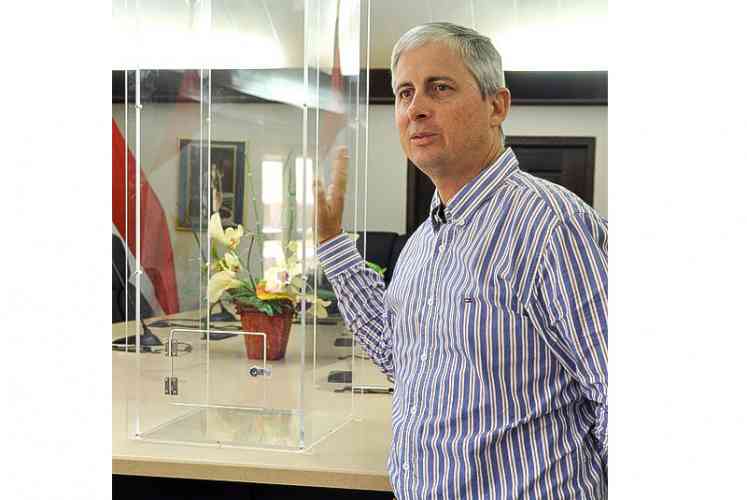 Head of the Main and Central Voting Bureau Island Governor Jonathan Johnson shows the new, transparent ballot box during a meeting with the members of the voting stations.

SABA–Voters may not wear or display promotional material inside the two voting stations in Saba during Election Day, Wednesday, March 20.

Wearing, for example, a T-shirt or a cap stating the political party and/or candidate will not be allowed when a person enters the voting station to cast his or her vote. These and other regulations were discussed in a meeting of the Main and Central Voting Bureau with the members of the voting stations at the government Administration Building on Monday afternoon.

Voters are allowed to be present in the voting station as observers, as well as members of a political party, but they must be quiet, not disrupt the order or try to influence a voter in their choice.

The chairperson of the voting station is responsible for the maintaining of order. Head of the Main and Central Voting Bureau Island Governor Jonathan Johnson emphasized that the Electoral Law will be strictly enforced.

Only eligible voters with the Dutch nationality may vote for the Electoral College, the body that elects the Members of the Dutch Parliament’s First Chamber, the Senate.

This year, two international observers will be present at the March 20 elections. These observers are of the International Foundation for Electoral Systems (IFES), a non-profit, non-partisan electoral-assistance organization that has worked with more than 145 countries in the past 30 years.

This year again, just as four years ago, Lia van den Berg of the Dutch municipality Hollands Kroon is assisting the Public Entity Saba with the preparations of the elections.

The voting stations at the Fire Station in The Bottom and Eugenius Johnson Center in Windwardside, will open at 7:30am sharp and close at 9:00pm for the counting of the votes. The votes for the Island Council will be counted first, followed by the Electoral College.

Later that evening, Head of the Main and Central Voting Bureau Jonathan Johnson will announce the preliminary results.

Two days later, on Friday, the Main and Central Voting Bureau will verify the election results and declare them final.