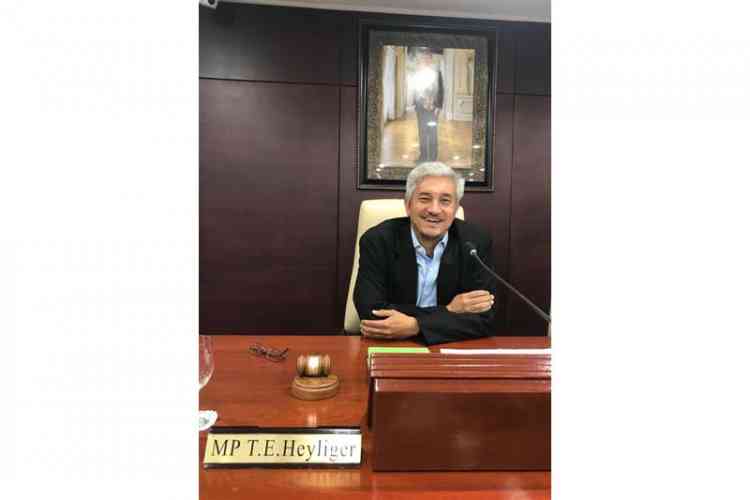 PHILIPSBURG–The almost-nine-year-old St. Maarten Parliament is facing yet a new challenge with its role, the letter of the Constitution and its resulting laws.

This time it has to do with whether a sitting Member of Parliament can be suspended when arrested and detained on criminal charges as is the case of United Democrats leader MP Theo Heyliger. Heyliger was arrested on February 19 in the investigation code-named “Larimar.” He is currently being held in Bonaire.

The Prosecutor’s Office has written to Parliament about the status of Heyliger’s seat due to the charges levelled against him. Parliament Chairwoman Sarah Wescot-Williams told The Daily Herald that letter is “under review” by the legislature. To that end, an in-camera meeting was held in Parliament on Monday to discuss the matter. No firm decision has yet been made.

Wescot-Williams and head of the Central Voting Bureau attorney Jason Rogers are combing through the laws to see what is permitted, and using what procedures. “Where necessary” the two are “seeking expert advice,” she said. “The matter is not as straightforward as one would think.”

No MP has been suspended in the brief history of Parliament, despite the arrest and subsequent release of two other MPs on criminal charges.

Now-former-MP Silvio Matser and MP Frans Richardson were both in similar positions as Heyliger, but no letter querying suspension was sent to Parliament. The argument in Heyliger’s case is that the charges, which include bribery, are grave and listed as grounds for suspension under the Constitution Article 50.

Should Heyliger be suspended, subsection 3 of Article 50 allows for his replacement by “a deputy,” but the suspended MP will have his remuneration. The person who deputises for the suspended MP or the person who replaces an MP who has lost membership shall step down at the same time as the other MPs (read, at election).

In the event of replacement, former MP Jules James is next on the United Democrats list of candidates in terms of votes received in the 2018 Parliament elections.

With Heyliger unable to attend sittings of Parliament, decisions can become deadlocked and stalled if the seven remaining members of the governing coalition vote one way and the seven member of the opposition another. This would mean no motion can be carried or laws passed it there is contention.

The seven-seven tie saw two motions of no confidence against two ministers not carried more than a week ago. However, a law allowing notaries to conduct their practice in Saba and St. Eustatius was unanimously passed on Monday without Heyliger and with support from both sides of the aisle.