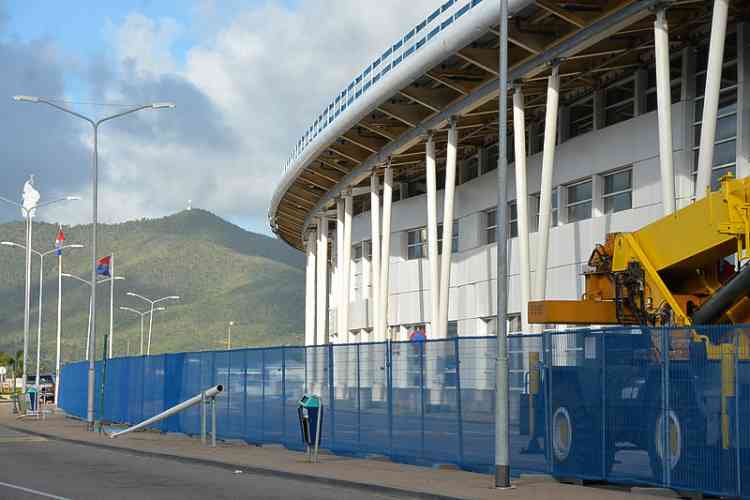 AIRPORT–It looks as though St. Maarten, a favoured holiday destination, will go into yet another high tourist season with visitors deplaning the old fashioned way – by plane steps rather than by jet bridges.

There is no timeline yet for the much-needed reconstruction of the Princess Juliana International Airport (PJIA) terminal. The building was severely damaged by Hurricanes Irma and Maria almost two years ago. The roof has been repaired and a section of the building is back in operation. However, the conditions for arriving and departing passengers are still far from the modern conveniences of what was once one of the most state-of-the-art airports in the Caribbean.

Finance Minister Perry Geerlings, the point-person for government on the airport financing and recovery process, said in the Council of Ministers press briefing on Wednesday, “I can’t give you a timeline as to when we will see yellow helmets and yellow vests walking in the building.”

The prolonged delay in reconstruction is linked to insurance and other disputes. Most of these are close to resolution or have been resolved in the past months.

One sticking point was how the airport could access its insurance pay-out that was funnelled into an account of its bondholders (investors) as the beneficiary. An agreement is in the offing on this aspect, said Geerlings. He added that bondholders wanted “some guarantees” put in place. Those have been addressed by government.

Government and PJIA need to sign a concession agreement going forward. This is another aspect of getting all financing needed for the restructuring to pick up pace.

There are “lots of components to get the financing together” and to getting the money released to the airport, said Geerlings. The financing, totalling a US $100 million loan jointly supplied by government and the European Investment Bank (EIB), is in place, but the matter of how it will be disbursed is the stumbling block.

The loan and insurance amounts will be used to get the airport terminal back to its industry-leadership position. After the disbursement is worked out, the procurement process for contractors and materials will commence.

The molasses pace of the terminal recovery has large and small hoteliers nervous about the discomfort and inconvenience visitors will face on their way to start their island vacations and the impression with which they will leave.

Hoteliers have been highlighting that airlines will not be quick to increase flights into the destination if the turnaround time for their passengers is slow or the airport’s arrival and departure areas are congested.