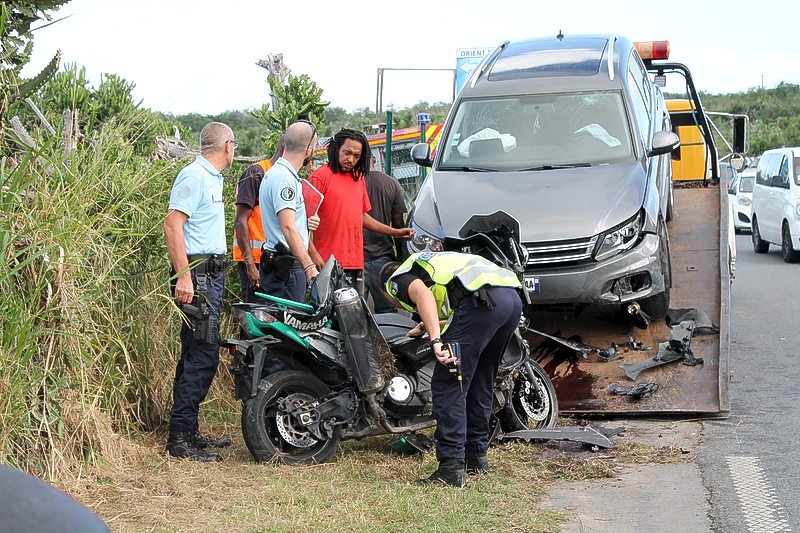 MARIGOT–Preliminary indicators suggest a T Max scooter rider was the cause of a multiple-car accident on the RN7 in Orient Bay on Saturday afternoon, after an aborted overtaking manoeuvre caused four cars to drive into the back of each other.

Fortunately, there were no injuries, but considerable material damage to the front and rear of the cars involved was evident.

The scooter was heading in the direction of French Quarter in busy traffic both ways when he apparently decided to overtake just before the Boo Boo Jam entrance, but on realising he could not get through, he cut back to his right side, but the sudden manoeuvre caused him to be hit by the following car that tried to brake to avoid him.That resulted in a domino effect with three other cars hitting the rear of the cars in front. The scooter was badly damaged on the side of the road, but the rider, seemingly unhurt, disappeared on foot before Gendarmes arrived.

Several children and adults were in the cars that were involved. At least two of the cars were towed away along with the scooter, while the other cars were able to get off the road opposite the Boo Jam entrance to have their damage evaluated by Gendarmes.

Capitaine Régis Turlan Arto said the drivers were given routine alcohol breath tests, but there were no signs of driving under the influence. He said the identity of the scooter rider was known and he will be detained in due course as part of the investigation into the accident.