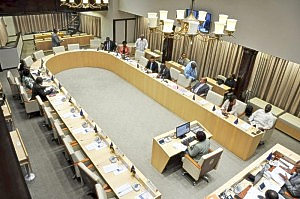 WILLEMSTAD–Curaçao opposition party MFK submitted a letter to Governor Lucille George-Wout signed by nine Members of Parliament (MPs) indicating that the recently installed Koeiman Cabinet I does not have the support of a majority in the legislature.

Only 14 of the 21 parliamentary seats are currently occupied, after the other seven MPs were sworn in as Ministers on December 23. Pending their replacement by other candidates on the respective parties’ elections lists, this means the incoming MAN/PAR/PNP/PS coalition has only four MPs left.

The MFK-fraction had earlier asked President of Parliament Humphrey Davelaar (PNP) for an urgent public meeting because the new Government headed by Prime Minister Hensley Koeiman (MAN) does not enjoy the backing of a majority in Parliament, but received no immediate response.

In their letter to the governor, the opposition members indicate that they approached her because Davelaar is not reacting to their petition. According to these nine MPs, the ministers should immediately resign.

They also state that this Government does not have any authority to govern and to make decisions. The ministers will therefore be held personally accountable for their actions, warned the opposition members.

The seven MPs who took oath as Minister on December 23 were Koeiman and Kenneth Gijsbertha (both MAN), Zita Jesus-Leito and Eugene Rhugennaath (both PAR), Jaime Cordoba and Ruthmilda Larmonie-Cecilia (both PS) and Suzy Camelia-Römer (PNP).