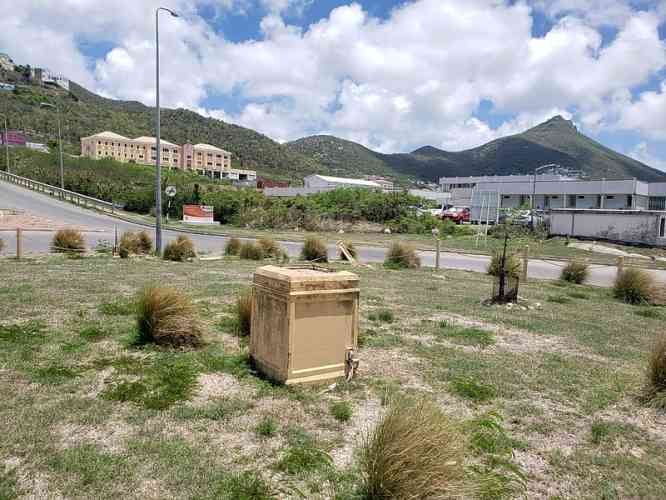 One Tété Lohkay’s lonely and empty pedestal at the Cay Hill Roundabout.

CAY HILL–A symbol of St. Maarten’s fortitude in the face of adversity is missing for more than a year now. Government seems to have no clue where this symbol – a statue dedicated to legendary heroine One-Tété Lohkay placed at the Cay Hill Roundabout in 2006, is.

The statue, showing the heroine in flight, faced down the powerful gales for Hurricanes Irma and Maria in September 2017 and was bent, but not broken. The statue was removed a few months after the hurricanes and was never returned to her pedestal. She appears to have been forgotten and unmissed.

Infrastructure Minister Miklos Giterson was asked by the press on Wednesday if he know the whereabouts of One Tété. He did not have the answer, nor did anyone else of the ministers, including Culture Minister Wycliffe Smith, present at the Weekly Council of Ministers Press Briefing.

According to legend, One Tété was a young woman or perhaps a girl who was enslaved on a plantation in St. Maarten. However, being a slave was not for her; she rebelled and ran away from her “owners”.

One-Tété was hunted down by the plantation owners, recaptured and brought back to the plantation. As punishment for the defiance and as a warning to other slaves, the slave masters ordered that one of her breasts be cut off. That is how she became known as One-Tété Lohkay.

The missing statue was sculpted by Nigeria-born St. Maarten resident Michael Meghiro. It depicted One Tété running with a bundle of sugar-cane sticks on her shoulder. If you looked closely, you could see that one side of her chest was deformed.

There had been efforts to relocate the statute to the top of the Cole Bay Hill as a symbol of her survival in the hills, especially the high ridges above Cul de Sac. Cultural activist Shujah Reiph has been quoted as saying, “We need to put Lohkay on the top of the mountain where she deserves to be.”

Lasana Sekou described her in his book National Symbols of St. Martin as “a kindred spirit

to many, for she is the Nanny of Jamaica, Queen Mary and Bottom Belly of the Virgin Islands, the Harriet Tubman of the USA, and other champions of freedom who have burst the chains of slavery and dealt mortal blows to the plantation and its rulers.”

The statue was unveiled by then-Commissioner of Culture Louie Laveist on Emancipation Day 2006. At the time July 1 was not yet even a holiday.