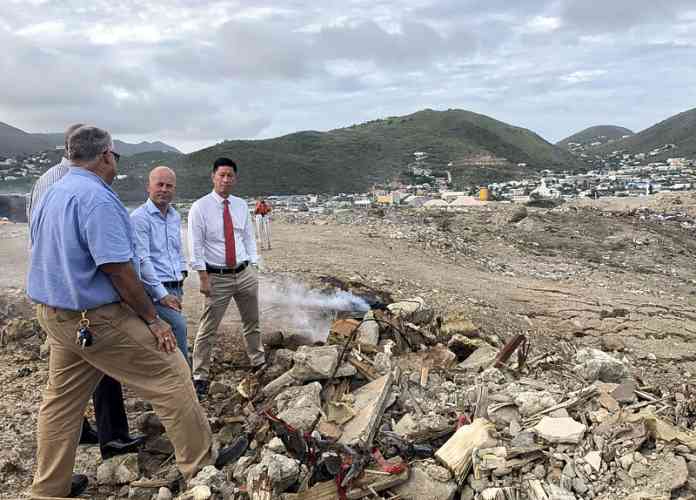 THE HAGUE–There is no immediate, short-term solution in sight for the dump in St. Maarten, according to Dutch State Secretary of Home Affairs and Kingdom Relations Raymond Knops. “It is an illusion that this matter can be resolved quickly.”

Visiting the St. Maarten dump for the first time last week, standing on top of the hill of trash and taking in the immense size of it, Knops felt deep concern. “I kept asking myself, how could things have gotten this far? How could the government, but also the people have allowed this to happen?”

The waste disposal site was one of the main elements in Knops’ visit to St. Maarten, where he spoke with the local government about arriving at an urgent solution to the threat the toxic, burning and ever-expanding site presents for the island, its people, the economy, public health and the environment.

“I was able to take a close look at the dump, see it with my own eyes, not from a distance,” he said. A week after his visit, back in his office at the Ministry of Home Affairs and Kingdom Relations BZK in The Hague, he talked to The Daily Herald about what many have labelled St. Maarten’s top priority.

“We saw fires everywhere. We were only there for half an hour, and that was already bad. It is immense. And to this day, everything still gets dumped on one gigantic hill, including tyres and everything else that burns. The smaller dump across the way is being used again. Something needs to happen,” said Knops.

The dump is not only a threat to public health and the environment: it also affects the tourism-driven economy. “When you arrive on St. Maarten, the first thing you smell is the dump. Welcome to St. Maarten. Naturally that is very bad publicity for an island that depends on tourism.”

The waste disposal site debacle also touches on the capability of the government and the willingness to tackle this issue. “It says something about the manner in which they are able to organise a system to dispose of waste. It is a bit symbolic for the manner in which issues such as these were dealt with in the past decades.”

It bothers Knops that no action was taken before. “The current government acknowledges that it is a big problem, but what I don’t understand is that government for the past 30 to 40 years merely thought, let’s just dump it all because there is enough space.”

The dump kept getting bigger and everyone just allowed it to happen with disastrous results: “People have to live in toxic fumes. I think that as a government, as politicians, one has to stand up for that, try to solve the problem. This government has the political will and there is pressure from the community to do something.”

There is a sense of urgency, and that is a good thing. “I find it positive that something is finally happening, but the problem is of such a magnitude that there are almost no more quick solutions.” He said it was a technically complex issue, also because there are people living and working close by. “The experts are saying that this is not a short-term matter.”
A thorough plan is needed and currently being prepared with World Bank experts, with the input of Dutch expertise. The approach is two-prong: contain the fires and establish a new system of waste management.

The first phase is to contain the fires and to prevent them from breaking out. That is the repressive side. A new waste management system is also needed. The idea is to do this together with the French side of the island. This is not only important in terms of volume, but also because there are reports of illegal dumping of trash from the French side on the Dutch side for lack of supervision.

“There is a lot to be gained with a good system that includes the separation of waste and sustainable processing, recycling. Separating of waste is important. If they keep throwing old tyres on the dump and they catch fire, they burn a long time and create toxic smoke.” Knops said he could not say anything about the plan that is currently being developed.
Developing an integral, solid plan that also holds for the future takes time, he explained. Things cannot be rushed, because that makes no sense. “You can say, let’s start excavating, load the dump trucks and carry off the trash. But that will take many years.

Things have to be well-thought-through. How do you tackle this issue in a solid and sustainable manner? That is work for the experts.”