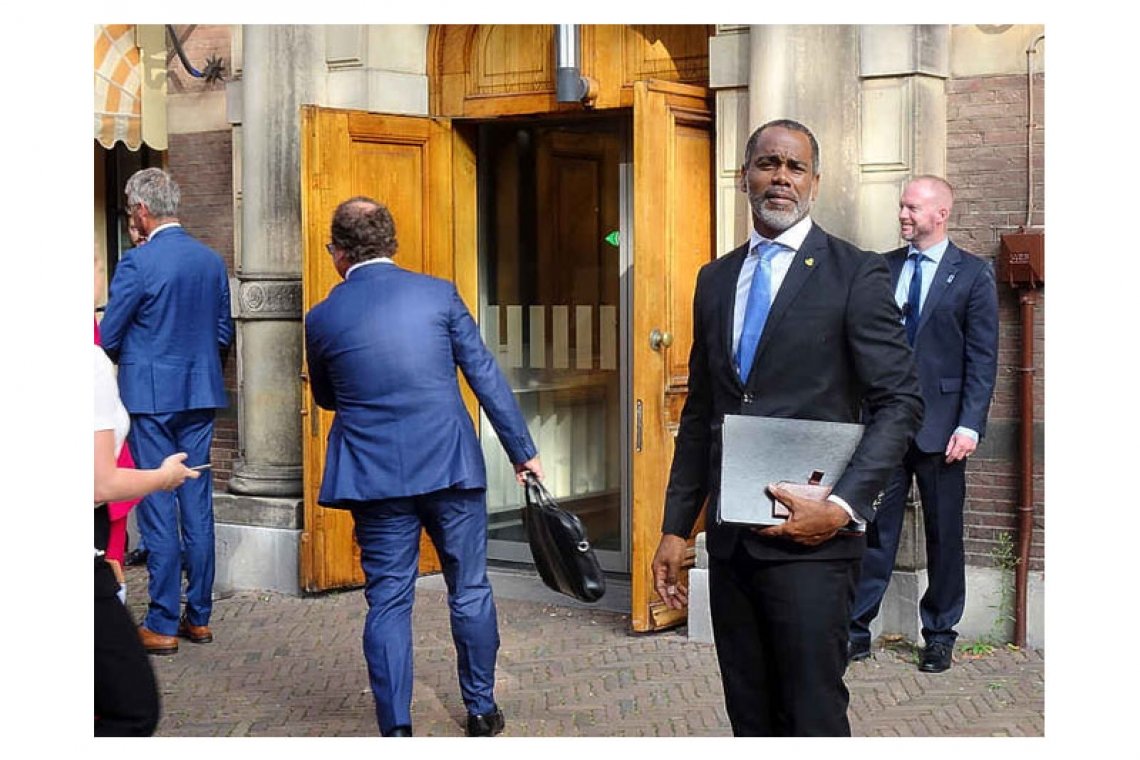 St. Maarten Minister Plenipotentiary Rene Violenus arrives at the Binnenhof in The Hague for the Kingdom Council of Ministers meeting on Friday. (Suzanne Koelega photo)

THE HAGUE–St. Maarten will not receive any funding from the third tranche liquidity support because the country has failed, for a second time, to meet the conditions of the second tranche. Curaçao has also not fully complied, but is closer to meeting the requirements.  State Secretary of Home Affairs and Kingdom Relations Raymond Knops stated this in a letter to the Dutch Parliament on Friday about the decision-taking of the Kingdom Council of Ministers on August 14 with regard to the compliance by Curaçao and St. Maarten of the conditions of the second tranche.

Prior to the previous Kingdom Council of Ministers meeting on July 10, the Committee for Financial Supervision CFT could not ascertain that Curaçao and St. Maarten had met the conditions of the second tranche. That is why both countries were given until July 15 to submit all relevant documentation to the CFT by July 15 and to prove that they had complied with the conditions.

Based on this documentation, the CFT drafted an advice on August 11, which was discussed during the August 14 meeting of the Kingdom Council of Ministers meeting. The CFT concluded that both Curaçao and St. Maarten had not (fully) complied.

St. Maarten will now have to move. “If the country wants to have this talk, it will first need to show via the CFT to the Kingdom Council of Ministers that it complies yet with the set conditions for the second and third tranche.”

Knops clarified that only then the Kingdom Council of Ministers, based on the circumstances at that moment, will assess St. Maarten’s request. At that time, it will also be assessed whether there is still a need for liquidity support.

As for Curaçao, the state secretary explained that the CFT had concluded in its August 11 advice that Curaçao had taken “meaningful steps” in complying with the agreed upon conditions. However, the country didn’t fully comply with all conditions of the second tranche.

“Decisions have been taken with regard to most of the conditions and these decisions are being executed, but they still need to be secured legally. The salaries of politicians have already been cut by 25 per cent, but the National Ordinance to finalise this is still in preparation. The same goes for the 12.5 per cent cutback on the labour package of employees in the (semi) public sector,” stated Knops.

That is why the Kingdom Council of Ministers decided on Friday to give Curaçao the opportunity to submit additional information to the CFT before September 1 which will prove that the country now complies with all set conditions.

The CFT has been asked to give its advice to the Kingdom government no later than September 7. “In the meantime, this trajectory doesn’t obstruct talks about the third tranche liquidity support based on the comprehensive package that was on the table in the July 10 Kingdom Council of Ministers,” stated Knops.

On July 10, the Kingdom government already decided that Aruba largely complied with the conditions for the second tranche, with the exception of the maximising of the salaries on the highest level in the (semi) public sector to a maximum of 130 per cent of the prime minister’s salary.

Aruba has until October 1 to have its Parliament approve a proposal for the maximising of the highest incomes in the (semi) public sector. “This means that Aruba at this time in principle is eligible for the third tranche liquidity support, be it that we come to an unconditional agreement about the other conditions of the third tranche,” the stated secretary noted.