Home Local News No water tank in commission for Cupecoy, Maho and Lowlands 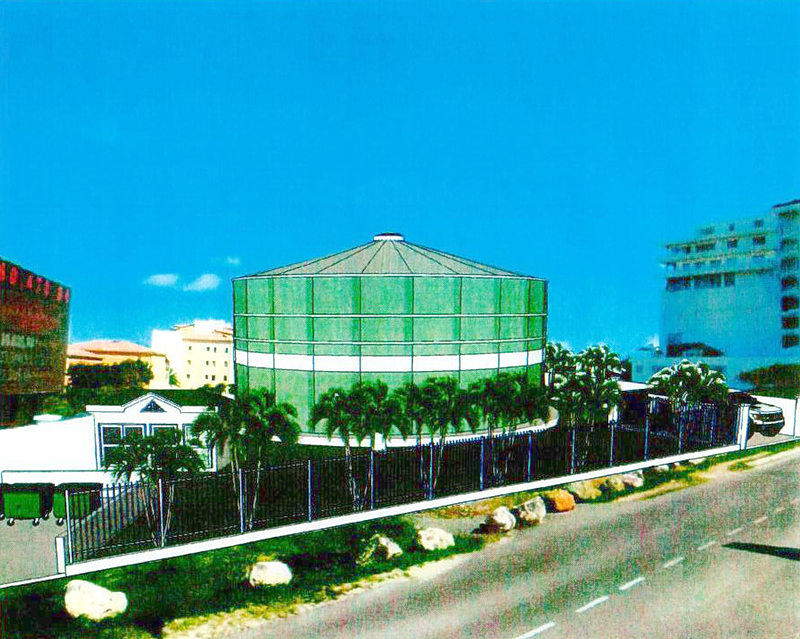 GEBE has received pushback from Minister of Public Housing, Spatial Planning, Environment and Infrastructure VROMI Christophe Emmanuel. The disagreement had to do with whether to redevelop a damaged storage tank in Mullet Bay or create infrastructure in an adjoining district to accommodate a new tank. Emmanuel stated in correspondences with the GEBE board that he would prefer GEBE continue using existing infrastructure.

The company believes using the old facilities could initially cost a few hundred thousand guilders more (including cost to demolish the old tank) and the company would never actually own the property on which the tank would be located. GEBE would have to continue paying for a lease. Another option is to buy land from hoteliers in Maho, which could cost more than twice as much as starting over elsewhere.

GEBE’s Chief Executive Officer (CEO) Kenrick Chittick warned the Council of Ministers in a letter dated March 27 that expanding facilities would be the only way to avert a thirst crisis from Maho to Lowlands.

“Without a water storage tank in the near vicinity of the water production facility, water produced will be unable to undergo the necessary testing prior to it being supplied to the consumers,” Chittick wrote, offering soft language to a problem he describes as having high urgency.

Emmanuel refused to grant GEBE an exception to build the storage tank in Cupecoy. It would violate that district’s zoning regulations, as Chittick notes in another letter to Government. Chittick wanted the Council of Ministers to overrule Emmanuel.

He continued, “GEBE already owns the tank and has budgeted for more water-storage capacity this year, and the company could have the tank operational by October, assuming the Council approves the land purchase and zoning exception before the end of June.”

The letter accompanies three dozen pages of technical drawings, e-mail conversations and pricing and structural analysis from GEBE. A tank in Mullet Bay imploded last May, drying up an important water-carrying vein to areas as far as Simpson Bay and Pelican Key. Now, a single tank in Pelican is responsible for all the water to those areas. Already, it is showing signs of strain.

Maho is home to resorts and restaurants while Cupecoy and Lowlands house developments such as Porto Cupecoy and Blue Mall, the soon-to-be-transformed shopping centre. Several international students live in Cupecoy, which is also home to American University of the Caribbean (AUC) Medical School.

The imploded tank is located on the Mullet Bay property. GEBE’s report also indicated that paying the property owners to continue housing it there would cost too much, and said developers have refused requests to erect a water tank in a different location on the property.

GEBE expects to spend more than NAf. 3.1 million on the lease, versus buying the land and building the tank in Cupecoy for just over NAf. 3 million. Another possible location, a plot in Maho near the casino, would cost too much at nearly NAf. 7.5 million, according to the report.

“It is of sound business and technical sense to purchase the property in Cupecoy and not to re-enter into a lease agreement with the proprietors of Mullet Bay or [not – Ed.] to make use of the parcel of land offered to NV GEBE by the Maho group of companies,” Chittick said in his most recent letter.

The report includes correspondence between GEBE board members and Government officials. In a brief e-mail exchange, Veronica Jansen-Webster of GEBE presses Mark Williams of VROMI’s policy department to consider an exemption, underscoring the island’s water needs. In a March 9 letter, Emmanuel rejected Chittick’s request to build the new tank in Cupecoy, saying it made more “logistics, infrastructure and financing” sense to continue using Mullet Bay.

“We believe that given the pressing situation, it is more feasible to remove and construct a water tank at the current Mullet Bay location, given the infrastructure that is already in place,” Emmanuel wrote. “The cost would be cheaper than purchasing land and constructing a new tank at a new location.”