Home Headlines & Top Stories Number of witnesses still to be heard in US $11 million harbour-fraud... 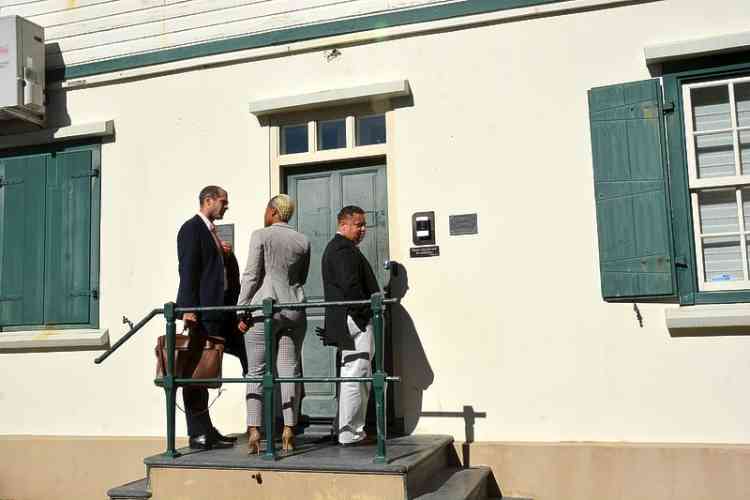 PHILIPSBURG–The second preliminary hearing in the “Emerald” criminal investigation into alleged fraud committed at Port St. Maarten Group of Companies (PSGC) did not take more than twenty minutes. As the Judge established Wednesday that not all witnesses in this case have been heard yet by the Judge of Instruction, the actual Court hearing in this case was postponed for an indefinite period of time.

In the Emerald investigation the Prosecutor’s Office charged PSGC Chief Executive Officer (CEO) Mark Mingo (47) and Checkmate Security director O’Neal Arrindell (37) with defrauding the Port out of a total of US $11 million.

United St. Maarten Party (US Party) leader Frans Richardson (50) was charged with accepting bribes to the amount of $370,000, the Prosecutor said during the first preliminary hearing of these three suspects in June.

Investigations have led to the suspicion that Mingo, Arrindell and other suspects had allegedly “robbed” the harbour of at least $8 million over a number of years by signing approximately 300 invoices submitted by seven one-man construction companies.

According to the Prosecutor’s Office, these invoices for services rendered to the Port for trucking, clean-up and other work, which were submitted from April 2012 to July 1, 2017, were forged and falsified.

In the Prosecutor’s opinion, these paid invoices concerned activities that were in reality not or only partly carried out for PSGC/the former St. Maarten Harbour Group of Companies N.V. (SMHGC), St. Maarten Holding N.V. or St. Maarten Cruise Facilities N.V.

Mingo and Arrindell are also charged with defrauding the Group of Companies in cooperation with Devcon TCI Ltd. and others out of approximately $3 million between July 2012 and June 2014.

According to the Prosecutor’s Office, this concerns forged documents pertaining to “mobilisation cost” and “general conditions” charged to the Harbour in connection with dredging work by Devcon, while these in fact served as payments to Arrindell and/or one or more of his companies.

Arrindell was charged with bribing Richardson and is also facing charges of illegal firearm possession. On November 28, 2016, he was found in possession of a Glock pistol with ammunition.

Arrindell is also accused of tax crimes. He allegedly failed to file income tax between January 2012 and January 2018. He also failed to file turnover tax on behalf of his company Sun Than Scooter Rental, and profit and turnover tax on behalf of Supreme Transportation Corp. N.V., Suntan Villa N.V., Sun Corp N.V. and/or Caribbean Sun Corp N.V., the Prosecutor said.

The three defendants did not speak during the first day of hearings, and declined to give any statement Wednesday.

A member of Arrindell’s defence team, attorney Niels van der Laan, complained about the Judge of Instruction’s conduct during the questioning of witnesses, which he labelled as “counter-productive.”

The lawyer, who had filed a request to take the Judge off the case, said the atmosphere during questioning was marked by “hostility and irritation,” possibly caused by the request.

He also objected to the fact that the Judge of Instruction had “unilaterally” decided to stop Tuesday’s hearing of witnesses, but the Prosecutor said the lawyer should also be looking at himself, as the termination of yesterday’s session also had to do with the lawyer’s own position in this case.

Van der Laan also requested a copy of a CD-ROM which he claimed contained around 2,000 documents pertaining to the Devcon case, whereas the case file only counts 24 documents, according to the lawyer.

The Judge said that all relevant documents should be made available to the defence. The request to hear two one-man contractors as witnesses in this case was also granted.

The Prosecutor’s Office was ordered to draft a report about any commitments made to witnesses, as Van der Laan claimed that witnesses had been granted “immunity” in exchange for statements.