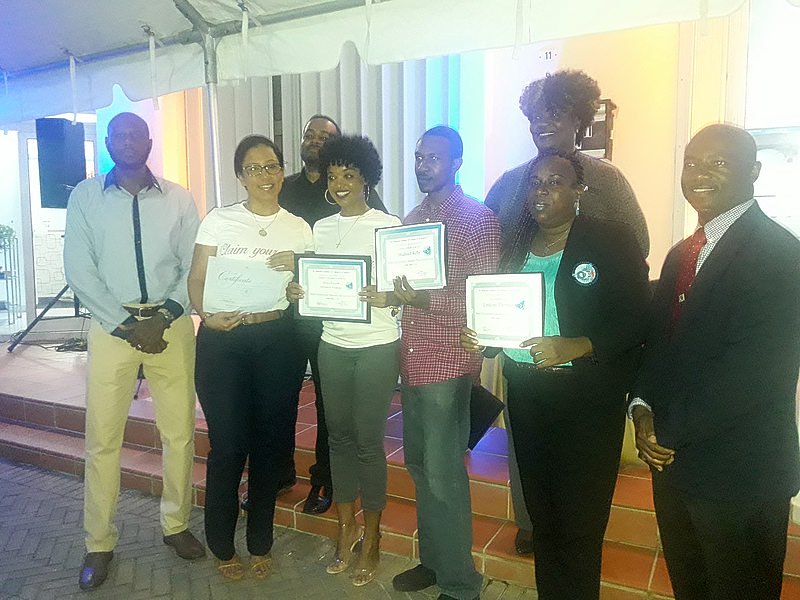 Winners Ahisha Nunes and Emmalexis Velasquez (second and third left) with runners up and Chamber Executive Director Anastacio Baker and other COCI representatives.

PHILIPSBURG–Ahisha Nunes and Emmalexis Velasquez have won the grand prize in the St. Maarten Chamber of Commerce and Industry (COCI) third annual Small Business Plan Competition. Nunes and Velasques were named the Ultimate Entrepreneurs and won Best Pitch and were the overall winners. The competition winners were announced during a ceremony held outside the Chamber office on Cannegieter Street on Monday evening.

As winners Nunes and Velasquez have won a trip to the British Virgin Islands (BVI) in December where they will represent the Chamber’s “Best Pitch,” attendees to the award ceremony were told. They also won a seven night stay at Royal Palm Beach Resort, a laptop and a laptop bag from Orco Bank, a printer, an executive chair, a marketing package worth US $500 and a stationary package valued at US $300.

Other winners for the evening included Yannick Hodge, who won the categories “Most Likely to Become Successful and Best Brand and Shaheed Kelly who won Best Brand and Best Marketing. Other finalists in the competition were Lindora Thomas and Collette Simon.

COCI new Executive Director Anastacio Baker said small and medium sized businesses have one thing in common: a vision. He said persons who operate such businesses envision themselves successful and believe in themselves before anyone else does and they work hard while others are at play. The event was held on World Entrepreneurs Day. Several prizes were given to the runners up and participants.