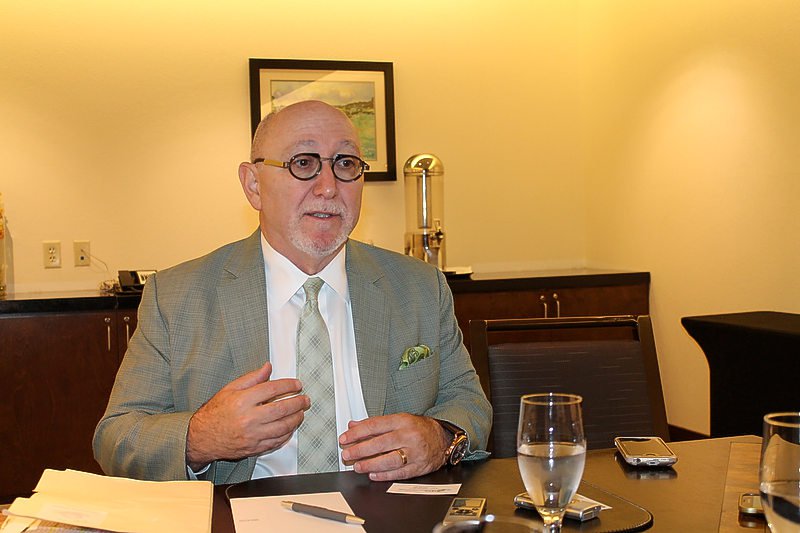 DAWN BEACH–President of American Resort Development Association (ARDA) Howard Nusbaum said Monday ahead of an Interval International seminar at the Westin Resort that with tourism being the economic driver that it is, his association has a greater responsibility to ensure timeshare consumers have a good experience.

“In this environment we affect the livelihood of so many people and we have to make sure we do it right. We don’t want to burn people,” he said. “So much of the market place is made up of US domestic travellers that we want to make sure promises made at the sales table are kept.”
He was addressing the issue of new legislation in St. Maarten for the timeshare industry which has seen its reputation blighted somewhat by the Caravanserai debacle and other cases. He agreed it is very important to have good rules.
“If you want developers to find loans and develop properties they need to know there is consistency in the policy and a robust platform is there for them. And it’s very important to have good consumer protection,” he said.
ARDA is partnering with the St. Maarten Timeshare Association and co-funding the initiative to bring in the new legislation. But there was no specific news on how far along this legislation is, to a vote in Parliament.
“I would rather have the right piece of legislation done if it takes longer than legislation done in a hurry,” he pointed out. “One should never get too full of oneself about one’s assets to assume they trump everything else. At the end of the day it has to make sense for the local economy, government, developers and the consumers. Good legislation should harmonise that.”
If timeshare has left a bad taste in the mouths of some unlucky consumers, the positive outweighs the negative with St. Maarten still ranking as a highly desirable destination and its exchange value is high, comparable to Hawaii.
“St. Maarten is safe, clean and welcoming, which is not always the experience elsewhere,” Nusbaum offers. “You have safety, quaintness and smallness but also big city adventure, great restaurants and activities. You are very important in our infrastructure.”
Timeshare owners, he adds, spend more money on their vacations than those who stay in hotels and their spending is more diverse. They are more likely to get involved in community life on the island. The average spends for a family of four outside the timeshare resort is $1,700 for a week.
President of Interval International, David Gilbert, noted of its 3,000 resorts in 80 countries in the world, 185 are in the Caribbean.
“The majority of our 2-million members are US residents and the most asked for international destination is the Caribbean,” he disclosed. “It’s an extraordinarily important market for our company and industry. As for St. Maarten, the island ranks only second to Aruba in exchange activity.”
He added, however, demand exceeds available inventory in the Caribbean and more projects are needed. That is being addressed at investment seminars to encourage developers to enter the timeshare industry and foster growth.
Gilbert did not believe crime was any worse in St. Maarten than anywhere else but the development of the Zika virus is of concern.
“We are watching it closely and I think it is definitely going to be an issue,” he said.
On the subject of maintenance fees, Gilbert said increases should be justifiable.
“Most developers I know try to keep the fees in check otherwise it hurts the sale of the product if it’s too high.”
President of the St. Maarten Timeshare Association, Marcel Javois, indicated lawyers are finalising and making adjustments to the legislation and he hoped within the next three months it will get to Parliament.
“We believe a law to protect timeshare members will increase our protection as a safe haven,” he said. “We want to show our members that we are concerned about their investment.”
Interval International is also contributing to the legislation with input and financial resources.
In general, the satisfaction rate among timeshare owners is 83 per cent. The average age of all timeshare owners is 51. The average age of those who purchased in the last 36 months was 39.
Timeshare buyers are predominantly white (71 percent). African Americans account for 23 per cent of purchases, Hispanics 19 per cent and Asian Americans 11 per cent.
The average annual income of US timeshare owners is US$126,000 but a survey done by Interval and the St. Maarten Timeshare Association showed visitors to St. Maarten were more affluent with an average income of US$ 147,000.
Interval’s Director of Resort Sales and Marketing Neil Kolton disclosed Dawn Beach, Oyster Bay, Divi Resort and Simpson Bay Resort, have donated funds from their inventory to the education funds of the Caribbean Hotel and Tourism Association (CHTA) and the Caribbean Tourism Organisation (CTO): some US$ 700,000 to date for scholarships and professional training.
Kolton said more individuals in St. Maarten need to apply for these CHTA and CTO scholarships otherwise the money doesn’t get used.