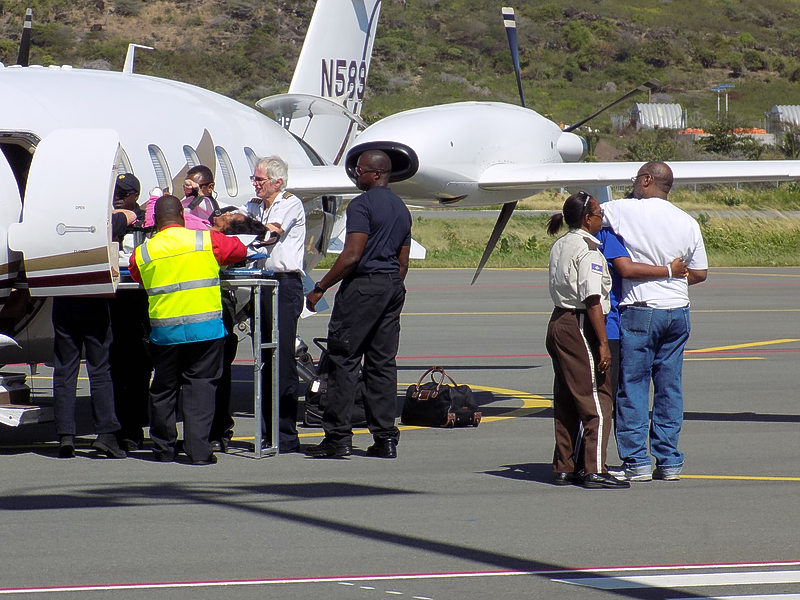 ST. EUSTATIUS–An emergency flight flew a resident of St. Eustatius for medical treatment to Miami, Florida, on Sunday. The civil servant working at the Civil Registry (Census Office) was experiencing a medical emergency which required immediate treatment, but due to unknown reasons the woman was not flown out on Friday when the symptoms first appeared.

On Friday morning, the woman was taken by ambulance to Queen Beatrix Medical Centre, when the medical emergency first presented itself.

“All the documents to have her flown out were completed, but seeing that the situation could become critical, her husband, who is a long-time employee of NuStar Statia Terminal, approached his employer for help. NuStar then made arrangements to have the lady flown out for much-needed medical treatment,” a source from within the patient’s church family said.

The patient’s husband accompanied her on the flight, and their minor children are being taken care of by relatives.

Three members of Air Ambulance Worldwide arrived on board the flight and were assisted by St. Eustatius ambulance personnel to transport the patient onto the waiting medical aircraft.

While the plane was on the ground, the patient once again experienced a medical emergency and was tended to by emergency personnel. Thereafter she was transported by stretcher to the waiting aircraft.

NuStar’s Local Manager Terry Keogh said that the woman’s husband had approached him concerning his wife who was ill and had asked for Keogh’s help. Keogh said he started making arrangements to have her flown out.

The plane was expected to land early Sunday morning, but because the flight crew were unfamiliar with the area, the flight was rescheduled for later on Sunday.

The Daily Herald tried to get a response from health care providers on St. Eustatius concerning the delay in having the patient flown overseas to get medical treatment, but up until press time no response had been forthcoming.