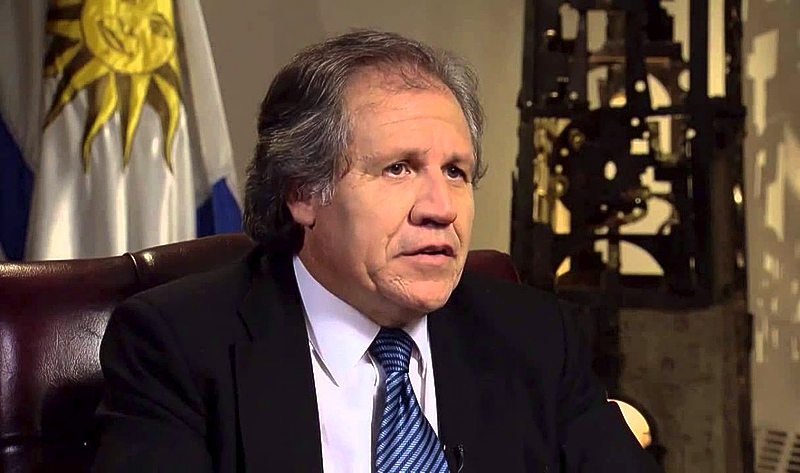 WASHINGTON, DC–In an unusual display of diplomatic “cojones,” Organization of American States (OAS) Secretary General Luis Almagro referred to Venezuelan President Nicolás Maduro as a petty dictator, a traitor and a liar in an open letter devoid of any semblance of tact or subtlety, let alone Latin American solidarity.

“You have an obligation to public decency to hold the recall referendum in 2016, because when politics are polarised the decision must go back to the people. That is what the Constitution says. To deny the people that vote, to deny them the possibility of deciding, would make you just another petty dictator, like so many this hemisphere has had,” Almagro told Maduro in his letter.

Opponents of the Maduro administration outside of Venezuela have been calling on the OAS to pressure the Venezuelan Government to uphold constitutional democratic principles in the country.

Maduro responded on Tuesday by calling Almagro a tool of the US Central Intelligence Agency (CIA).

On Wednesday, Almagro responded that the claim was absurd, and said he would not be threatened.

“I am not a CIA agent. And your lie, even if it is repeated 1,000 times, will never be true. Nevertheless it should be clarified, although this is to deny the absurd,” he wrote to Maduro.

Almagro said he is not a traitor to ideas, or to principles of freedom, honesty, decency, public integrity, democracy and human rights.

“But you are, President. You betray your people and your supposed ideology with your rambling tirades, you are a traitor to ethics in politics with your lies and you betray the most sacred principle in politics, which is to subject yourself to the scrutiny of your people,” he told Maduro.

Almagro called on Maduro to return the riches of those who have governed with him to the country, because they belong to the people; to return justice to the people in all the senses of the word; and to return political prisoners to their families.

“You should give the National Assembly back its legitimate power, because this comes from the people; you should return to the people the decision about their future. You will never be able to give back the lives of the children who have died in hospitals because they did not have medicine, you will never be able to free your people from so much suffering, so much intimidation, so much misery, so much distress and anxiety,” he said.

In a somewhat obscure reference, Almagro said, “I know that the OAS and my work bothers you because, as the song goes, ‘entre los Ceibos estorba un Quebracho.’ I am sorry to inform you that I neither bow down, nor am I intimidated.”

According to a Caribbean News Now Latin American specialist, Almagro may be saying that, in a group of nice looking, distinguished trees, the insignificant ugly tree is out of place and, although he (Almagro) may be out of place, he will neither bow down to nor be intimidated by Maduro; or that Maduro is the little ugly tree out of step with democracy.

Meanwhile, Venezuelan opposition leader Henrique Capriles has urged the army to choose whether it is “with the Constitution or with Maduro,” after a 60-day state of emergency was declared by the President, giving soldiers and police wider powers to deal with the country’s rapidly deteriorating economic situation.

Capriles said the decree gave the President unconstitutional powers and called on Venezuelans to ignore it and take to the streets.

“We, Venezuelans, will not accept this decree. This is Maduro putting himself above the Constitution,” Capriles told journalists. “To impose this, he’d better start preparing to deploy the war tanks and military jets.”

“And I tell the armed forces: The hour of truth is coming, to decide whether you are with the Constitution or with Maduro,” he said.

The decree was rejected by the opposition-held National Assembly late on Tuesday, but Maduro had indicated that he would not abide by its decision.

Capriles emphasised that the opposition was not calling for a military coup, but instead seeking a legal and constitutional way of ousting Maduro through a recall referendum.

Maduro has accused the US of leading a plot to destabilise the country and force him from office. ~ Curaçao Chronicle ~