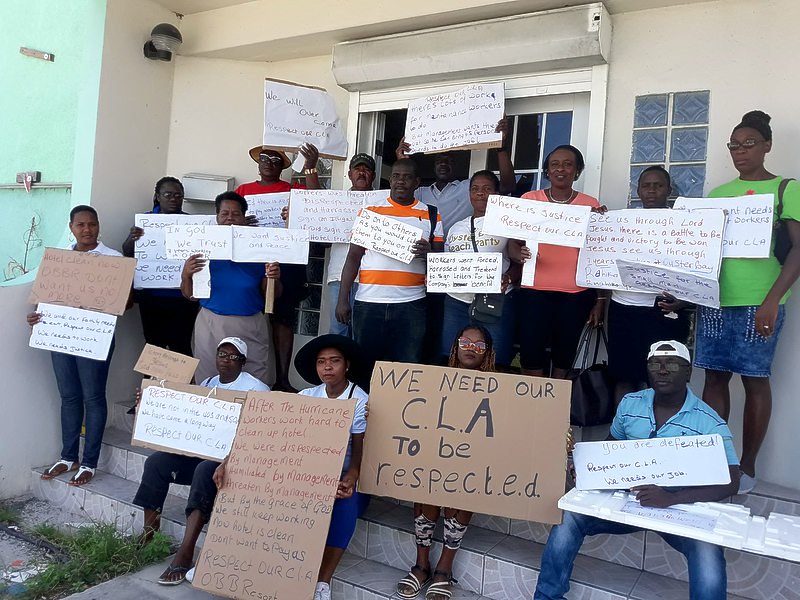 ~ ’Working hard to get everyone back to work’ ~

PHILIPSBURG–A number of Oyster Bay Beach Resort (OBBR) workers held a peaceful protest at the Workers Institute for Organised Labour (WIFOL) building on Wednesday to contest management’s offer for them to accept a phased reduction in salary over the next three months, until further notice.

OBBR developers Josh Gold and Mike Dolente said in an invited comment that it is with deep regret that OBBR had to ask a number of employees to accept a leave of absence with a reduced wage payment, starting in November.
“These employees will be provided this payment even if they are able to secure other employment during the reconstruction period. The reasons for this action are well-known to all St. Maarteners,” Gold and Dolente said, referring to Hurricane Irma, which caused widespread destruction on the island, including many resort properties.
They said Irma had deprived the resort of the ability to earn money through occupancy and services to tourists and it can no longer cover the entire payroll. “We are devoting all of our efforts to reconstructing the entire resort and getting our employees back to work full time,” they said.
The placard-bearing workers protested at the WIFOL building while their union representatives were meeting with resort representatives.
Workers told The Daily Herald that management had called in workers individually over the course of several days recently to sign letters saying they would accept 40 per cent of their regular salary in November, 30 per cent in December and 20 per cent in January until further notice. The workers said this is against their collective labour agreement (CLA) with the company.
Some workers have signed the letter, but those who were protesting had not. The workers claimed that those who did not sign had been told that if they refused to sign they could go and work for the union.
WIFOL President Theophilus Thompson said the union and OBBR have been engaged in discussions on the matter over the past weeks.
“The attorney of management admitted that management did violate the CLA in a number of articles and they will discuss matters further with the owners,” Thompson told this newspaper after the meeting. “We will meet again to discuss those points which need to be rectified and clarified. In the meantime, we emphasise the fact that the company must abide by the applicable articles in the CLA relevant under these conditions.”
He said OBBR had violated articles 1 and 2 of the CLA, which state that the company should not privately have employees sign any kind of documents without having a union representative present. “This is the main contention that we have, because they want to introduce a salary reduction which violates what is in the CLA,” he said.
Thompson said there are provisions in the CLA for crisis situations such as the one the resort is currently facing following the devastation caused by Hurricane Irma. “There is already a stipulated work week reduction and they want to go below that, and by not consulting the union or having an amendment made to the relevant articles they violate the CLA when they threaten workers to sign that letter,” he said.
He said also that the company had threatened workers who refused to sign its letter that they would not be paid. The CLA caters for a 40-hour workweek, which can be reduced to 32 hours in crisis situations, he said.
Thompson said OBBR is a timeshare property where members pay upfront and the company is also fully insured, so workers should not have to suffer. The union has proposed that management follow the provisions in the CLA and only in cases where persons who are not working at the resort during the reconstruction period find another job should management’s phased salary reduction apply. In all other cases the CLA provisions should be applied.
The union also took issue with OBBR’s discontinuing its transport of staffers to work. He said it was only during the meeting that the union learnt that the company will give its workers a NAf. 50 weekly transportation allowance.
Thompson said he has been meeting with management over the past weeks and the company recently brought in its attorney to take over the negotiations.
Management and the union will meet again next week to try to find common ground on the issues of concern.

Partial opening in June
OBBR developers said they believe they can open half of the resort in June 2018.
“It is important to note that we have been transparent with our employees, meeting with each one individually to explain the situation. After these meetings, 77 per cent of the employees agreed to the plan and signed a new agreement. We believe the employees who have not signed the agreement should understand the motivation of the majority of employees who did sign.
“We are working very hard to get everyone back to work and need the resources to accomplish this objective for everyone’s sake,” Gold and Dolente said.