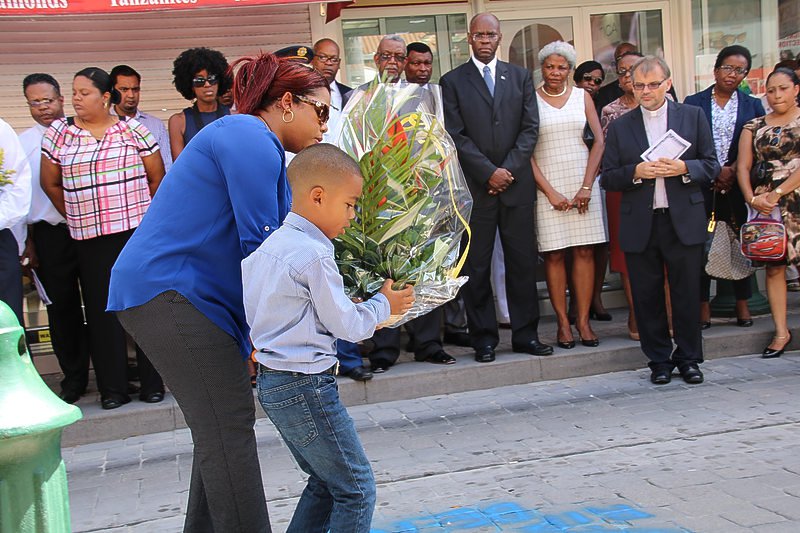 PHILIPSBURG–One year after, the Police Force of St. Maarten remembered the day when Officer Gamali Benjamin responded to a robbery in progress which resulted in his being shot on August 5, 2015, and passing away on August 8.

Benjamin was the first St. Maarten police officer to die in the line of duty, permanently reminding the population about the true meaning of the “protect and serve” slogan of the police. A memorial church service was held in his honour at St. Martin of Tours Roman Catholic Church on Front Street on Monday morning.

Governor Eugene Holiday, Minister Emil Lee and several Members of Parliament were present to pay respects to Benjamin. The officer’s father, widow and son sat in the front row of the church listening to the different tributes given by the speakers.

Minister of Justice Edson Kirindongo said Benjamin would be in the hearts of the Police Force forever. He also spoke of the different tools given to the officers in the past year such as bulletproof jackets for every officer, police equipment and the overall improvement of the Police Force.

Chief of Police Carl John thanked the family for allowing the police to grieve along with them and wanted to let them know that Gamali Benjamin was and would always remain a hero to them. The police will always remember the fallen officer and not one day goes by that he is not talked about, John said.

Gilbert Benjamin, father of the late officer, was grateful to those who came to remember this day with the family and thanked those who had made time to attend the service.

The service then moved to the upper part of Front Street in front of Oro Diamante where the congregation observed a moment of silence and laid flowers close to the spot where Benjamin had been gunned down.

The Gamali Benjamin Foundation hosted the event in collaboration with the police and the Ministry of Justice. The Foundation’s objectives are to render assistance in different forms to men and women in blue critically injured in the line of duty. It also will provide therapeutic and rehabilitation assistance to eligible recipients.

One of its main goals will be to provide educational assistance to children of uniformed officers who die or are injured on duty. Officer Benjamin’s young son was one of the first beneficiaries of the Foundation, which is assisting in providing him with a sound education.

The Foundation has received the support of some local and foreign businesses through financial assistance enabling it to carry out its functions.