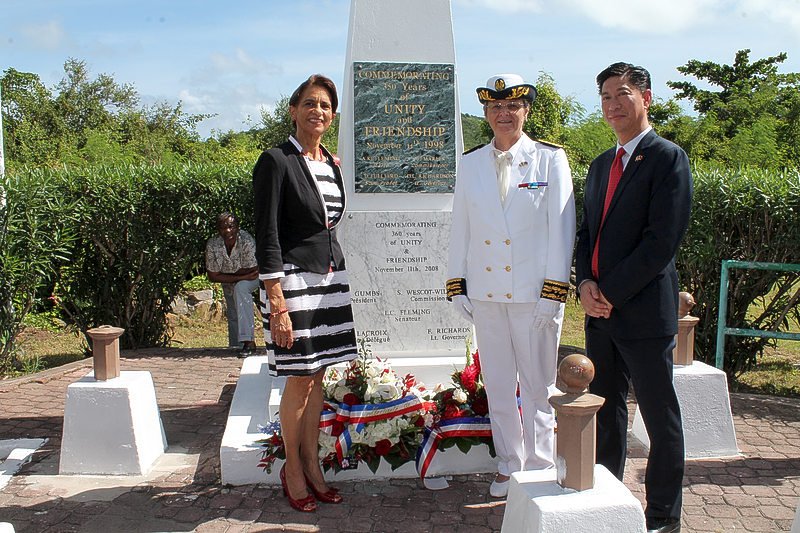 FRENCH QUARTER–November 11, 2016, will be remembered as the year no Dutch-side dignitary was present in person at the official ceremony in French Quarter to traditionally speak on the spirit and sentiments associated with St. Martin Day, an unusual situation prompted by the boycott of the official ceremony by Prime Minister William Marlin and the Council of Ministers due to the Oyster Pond affair.

If tension between Dutch and French sides threatened to over shadow the ceremonies it was not evident yesterday and a potentially awkward Marlin-Préfète Laubies moment was avoided. Everything proceeded normally, at least on the face of it.

The essence of unity was saved by the presence of Opposition Democratic Party (DP) Member of Parliament (MP) Sarah Wescot-Williams and fellow DP Parliamentarian Emil Lee who posed at the border monument with Préfète Délégué Anne Laubies and stayed for the speeches.

Wescot-Williams and Lee had both made it clear on the floor of the legislature on Thursday that they did not support the boycott, saying that “not being present at the ceremony would not send a good signal of unity.”

The show of protest followed what Prime Minister Marlin described as “a territorial infringement on the Dutch-side’s territory in Oyster Pond” by French authorities. Parliament subsequently passed a motion “to strongly condemn the acts of aggression exemplified by the unilateral actions of the French authorities/ Gendarmes in the Oyster Pond Lagoon which has historically and legally been part of Dutch St. Maarten.”

There were no specific references to the Oyster Pond incident or any explanations in the speeches of Préfète Laubies and MP Daniel Gibbs, but both alluded to it.

“The border issue has been a long-standing problem, it is being discussed and I am doing the best I can to find a solution for both sides of the island,” Laubies said in her remarks.

Said Gibbs: “In light of the recent incident that shook the two sides of the island I ask everyone to remember that the sharing of our island as defined in the Treaty of Concordia must be considered above all, an asset. St. Maarten is our sister, not our roommate.

“We have to go beyond the spirit of simple cohabitation and build a strong cooperation that makes sense and impacts positively the lives of our French and Dutch side citizens. They live cooperation on a daily basis. Unity is reality for them, but which unfortunately is undermined and discouraged by our political institutions.”

He added: “Knowing that 40 per cent of the staff from Princess Juliana Airport is from the French side and that the Dutch side plays a big part in the economy of the French side, that gives us a sense of living together and cooperation.”

Gibbs repeated his call for a united French and Dutch side congress for cooperation that would have an alternating President each year.

Some clarity was obtained by The Daily Herald on the interpretation of the “status quo” from the French side point of view as it relates to the Oyster Pond border, specifically the lagoon, while a decision has not been made yet by Paris and The Hague.

According to French authorities, status quo means that nothing can be “touched” while the diplomatic decision from France and the Netherlands is awaited. Replacing wooden docks with concrete ones in Captain Oliver’s Marina was considered illegal construction.

“What was controlled was one of the parcels listed in the French Cadastre,” a Collectivité government official explained. “The status quo means that nothing should change there. It was not just repairing docks. There was a barge there and that means there was rebuilding going on.”

Following the speeches Bishop Monseigneur Jean-Yves Riocreux from the Diocese of Guadeloupe presented President Aline Hanson with the official restitution of a register of births, deaths and marriages dating back to the 17th century that were previously held in the archives of Guadeloupe.

Three members of the Junior Territorial Council: Jerry Hodge, Jeanne Shanelle and Guillaume Wilky read out extracts from the contents of the records that existed before any official civil register was established. Some of the documents are very old and fragile, but will be cared for and protected in the Territorial Archives.

Earlier, the dignitaries gathered at the Belle Plaine border monument after the church service for the traditional laying of wreaths and photo opportunities.

That was followed by an impressive St. Martin Day parade on the RN7 watched by the dignitaries from a tent. It was led by a battalion of Gendarmes; among the troupes were the Scouts and Guides of St. Martin, Scouts of St. Maarten, Les Explorateurs, Boy’s Brigade, Pathfinders, Generation New Status STM Drum Band who marched with a “I’m a drug-free youth banner,” and the SXM Majorettes.