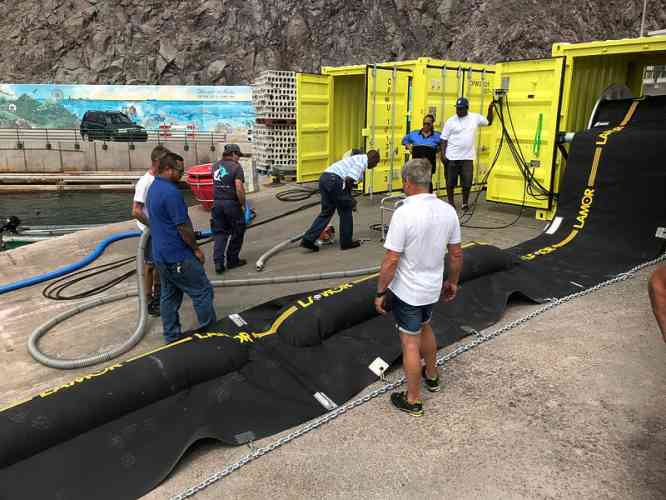 Company BDS-Harlingen providing training in the use of material to combat oil pollution at Saba’s Fort Bay harbour.

SABA/ST. EUSTATIUS–Company BDS-Harlingen in the Netherlands has received an order from the Rijkswaterstaat department at the Ministry of Infrastructure and Water Management to supply high-tech oil control equipment to Bonaire, Saba and St. Eustatius.

BDS-Harlingen is a company that specializes in the removal of environmentally- harmful materials, such as oil, paraffin, dead fish, blue algae and seaweed. In the past 25 years, not only pollutive substances were removed, but also a number of dead whales were also expertly disposed of.

Along the IJsselmeer inland lake in the Netherlands various quantities of oil have been removed, including from sunken ships at harbour. Recently, the company cleaned the beach of Wadden Sea island Vlieland in connection with paraffin pollution. BDS said in a press release it uses its knowledge to arrive at innovative and sustainable developments.

A few months ago, BDS delivered eight containers with materials to combat oil pollution in Bonaire. The local authorities were trained in using a hydraulic oil screen and the use of a lightweight oil-containment screen was practiced at Lac Bay.

BDS makes use of the knowledge it has gained with oil clearing when making oil equipment and advises their customers accordingly.

“There are only a few companies in the world that are both exporter/contractor and supplier. BDS itself adjusts materials to the requirements of the local situation,” owner/director of BDS André Borsch said.

A container ship with cargo destined for Statia and Saba arrived on September 13 in St. Maarten, where these were loaded on roll-on-roll-off vessels for transportation to these two special entities.

On September 25, BDS delivered four containers in Statia. In addition to theory, the local authorities also received practical training in the launching of an oil screen and a skimmer. “The islanders present were very enthusiastic and are convinced that these materials will be very effective during possible oil contamination,” Borsch said.

On September 27, BDS delivered the last three containers in Saba. “Again, we were received by very enthusiastic people. A BDS team will be present in the coming years to further improve the expertise of the authorities,” he stated.

BDS said it has also been approached to help figure out to what extent the huge amounts of sargassum seaweed can be removed from the islands’ shores with both new and existing equipment. BDS has developed a lot of equipment that is used for heavy blue algae and seaweed.

Where the “enormous sargassum problems” in both Bonaire and St. Maarten are concerned, BDS said it is “convinced” that when nothing is done about these problems they will cause “serious” economic problems.

“The flora and fauna will also be affected very badly by the influence of rotting sargassum. As an expert in the field of oil removal, BDS has indicated that it would like to cooperate with the authorities to remove the amount of sargassum in the short term and to come up with a structural solution in the longer term,” stated Borsch.