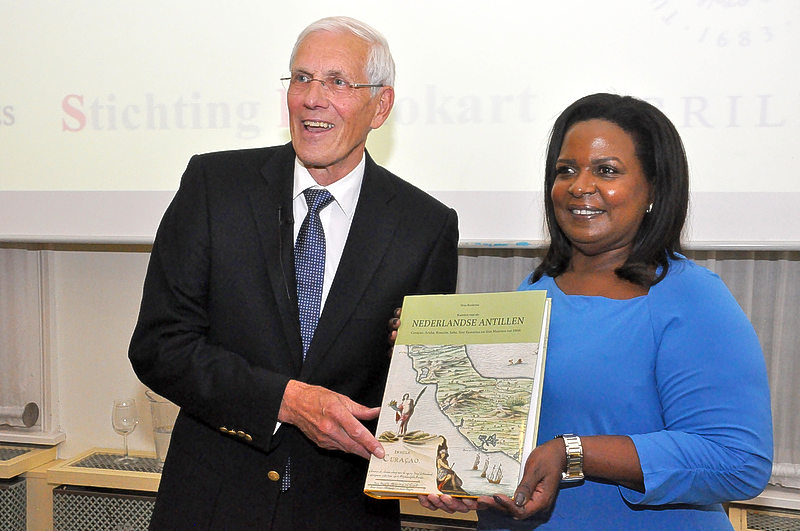 ~Renkema’s detailed cartographic bibliography published~
By Suzanne Koelega
AMSTERDAM–Charts of the Netherlands Antilles, Curaçao, Aruba, Bonaire, Saba, St. Eustatius and St. Maarten until 1900 may sound abstract, but there is a whole story, and a whole lot of work behind this hefty book which was officially presented in Amsterdam last Friday by the author, Wim Renkema. 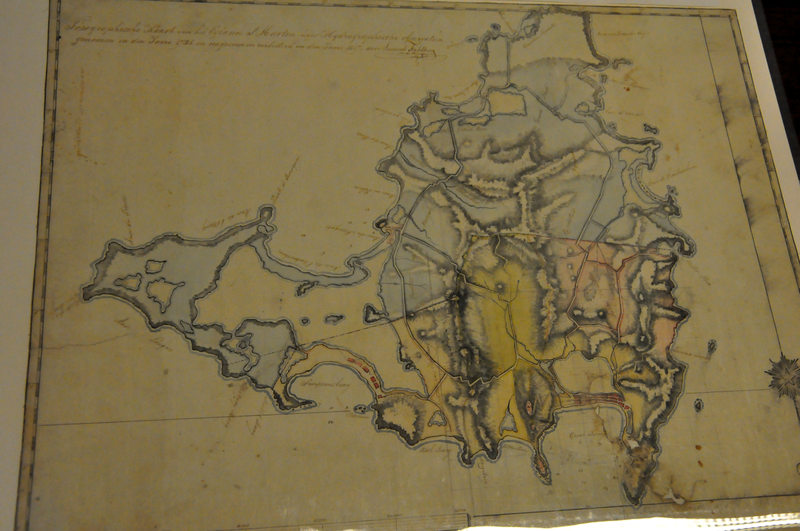 The author Renkema (born 1942) is a former history teacher at Curaçao’s Peter Stuyvesant College (PSC), now the Kolegio Alejandro Paula, containing old maps of the Dutch Caribbean, and undoubtedly a familiar person for the students attending that secondary HAVO/VWO school in the period 1970 to 1975.
Just as his students probably did, the audience who had gathered at the Special Collections Library of the University of Amsterdam UvA listened attentively to his open-hearted, personal story of how his 664 page book came about.
His particular interest in the history of the Dutch Caribbean came about when he was a teacher at PSC. It struck him that his students knew very little of the history of their own island. “I wanted to have my students also learn about the history of their island and the region.” So Renkema delved into the history of slavery and the many plantation houses in Curaçao, so he could tell his students all about it.
After his return to the Netherlands, he obtained his doctorate in 1981 with a thesis on the Curaçao plantation business in the nineteenth century and published a book with a similar title. Since then he has published several articles on the history of Curaçao and a book on Curaçao Governor Baron Reinier van Raders titled A Life in the West. Van Raders and his activities in Curaçao, which was published in 2009. 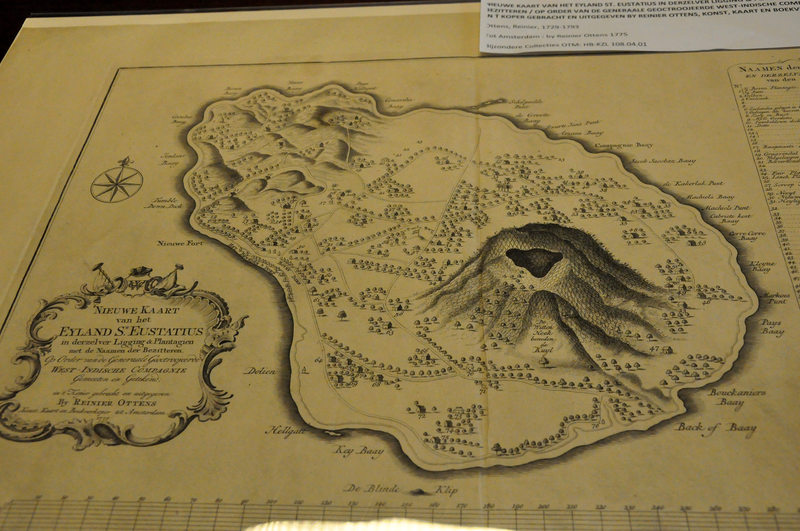 Van Raders, who had been stationed in St. Maarten in 1810, also made drawings, which sparked Renkema’s interest to further examine old drawings and maps. In examining the cartography of the six Dutch Caribbean islands, his interest in old maps and the history of the area came together. His journey that led to his most recent publication started with a hunt for old charts.
At the National Archive in The Hague, Renkema discovered antique charts such as the 1741 map of St. Eustatius, created by Alexander Laveaux who drew the map on the island itself. In first instance, he concentrated his efforts in the Netherlands, but soon his search took him to Sevilla, Spain and Paris, France. As former colonisers and seafarers in the Caribbean, these countries also had old charts.
In Sevilla, he found several maps of Curaçao and St. Maarten. And, at the National Library in Paris he found especially many maps depicting St. Maarten, L’isle de St. Martin, one of the earliest dating back to 1775. And also two charts of St. Eustatius, one from 1766 and the other from 1781. He explained during his lecture on Friday that many of the charts ended up in Paris due to the theft of Dutch heritage material under Napoleon.
Asked by The Daily Herald what he found most striking of the charts that he found of the Windward Islands, Renkema promptly mentioned the name of Samuel Fahlberg, a Swedish doctor who loved to draw charts. He lived in St. Barths, St. Eustatius and St. Maarten and drew charts of all three islands in the late eighteenth century. “He made beautiful, colourful charts,” said Renkema. 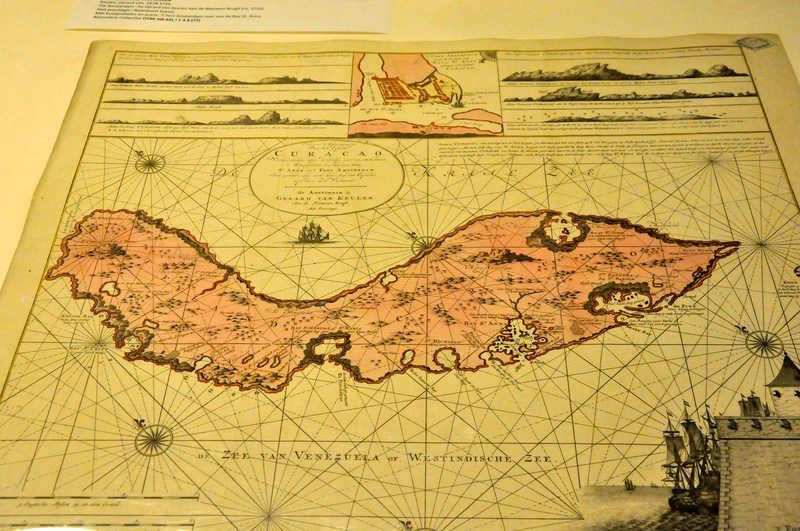 In all his searches Renkema in total discovered some 200 historic charts of Curaçao, 56 of St. Maarten/St. Martin, some 20 of St. Eustatius, 20 of Aruba, 15 of Bonaire and seven of Saba. Renkema called it “amazing” that he was able to find so many charts.
The research and the realisation of the book Charts of the Netherlands Antilles, Curaçao, Aruba, Bonaire, Saba, St. Eustatius and St. Maarten until 1900 was no small feat, Renkema told the audience. “We had to take many hurdles. The book itself is a small wonder,” he said.
With its 664 pages containing 404 full-colour illustrations and detailed descriptions, analyses and explanation, the book can be called anything but small. The publication systematically categorises and provides a nearly complete overview of the great variety of maps, both manuscript and printed, that have been made of the Dutch Caribbean.
The map descriptions are clarified with information on the creators of the maps and the historical background of the map image. The author has extensively studied how and for which reasons these maps were created.
The cartographic bibliography, written in Dutch with an English summary, is preceded by an extensive introduction in which the history of the islands and their inhabitants are described. The Charts of the Netherlands Antilles, Curaçao, Aruba, Bonaire, Saba, St. Eustatius and St. Maarten until 1900 is published by Brill Publishers.
This first copy was presented on Friday to Curaçao Minister Plenipotentiary Marvelyne Wiels, who expressed “great pride and immense thankfulness” for Renkema’s work. The book is volume 15 of the main series of the Explokart Studies in the History of Cartography. The first volume as part of the scientific series appeared in 2000. The Explokart project covers a variety of topics, countries and continents.
Volume 16 was also officially present at the Special Collections Library on Friday: Frederick de Wit and the first concise reference atlas by author George Carhart of the United States. De Wit (1629/1630-1707) was a cartographer and artist who drew, printed and sold maps in Amsterdam.
De Wit produced a simple, concise atlas with only maps at a much cheaper price than other publishers which made his atlases available to a greater public. He is considered the leading map and atlas publisher in his time, said Carhart, who analysed more than 110 atlases of De Wit. The first copy of Frederick de Wit and the first concise reference atlas was presented to Director of the Hermitage Museum and Nieuwe Kerk of Amsterdam, Cathelijne Broers.