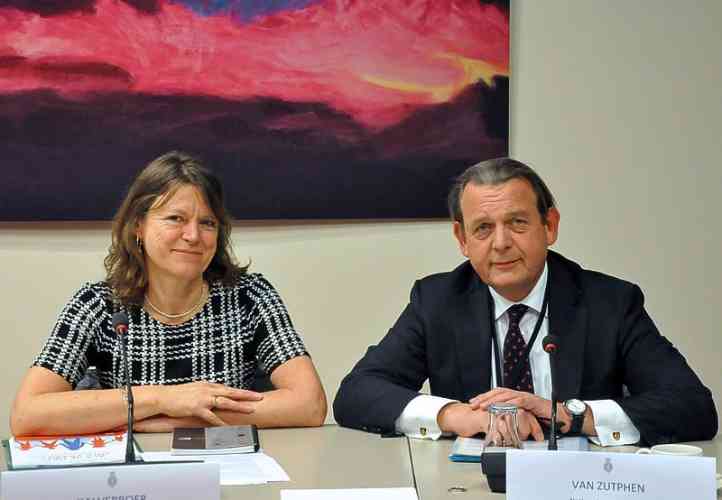 Children’s Ombudsman Margrite Kalverboer and National Ombudsman Reinier van Zutphen at the meeting in the Second Chamber of the Dutch Parliament on Wednesday. (Suzanne Koelega photo)

THE HAGUE–The Dutch National Ombudsman and the Ombudsman for children are determined to expand their work in Bonaire, St. Eustatius and Saba, despite the fact that the budget to do so is lacking.

National Ombudsman Reinier van Zutphen and Children’s Ombudsman Margrite Kalverboer gave an outline of the tasks they have on the three islands and the work they have done so far, during a meeting with the Permanent Committee for Kingdom Relations of the Second Chamber of the Dutch Parliament on Wednesday.

Since the islands became public entities of the Netherlands in October 2010, the task of the Children’s Ombudsman was never carried out. That is why she immediately picked up that task when she was appointed in May 2016, paid a visit to the islands in November of that year at which time she spoke with some 200 children, and this year drafted a report with her preliminary findings.

Children’s Ombudsman Kalverboer explained that she received no budget to carry out her tasks in the Caribbean Netherlands, even though the Netherlands has the responsibility for children’s rights on the three islands. She hinted that while the Dutch Government made funds available to “fly in all sorts specialists” in the area of children’s rights, her office received nothing for the islands.

Budget or no budget, Kalverboer said she was resolute on doing her job to defend the rights of children and to look out for their general wellbeing, making sure that children have a safe place to turn to, where they can share their concerns and, if needed, file a complaint.

Kalverboer and her team will visit the Caribbean Netherlands mid-January to look into the options of setting up a facility for children where they can talk and report incidents. She said this would be done in cooperation with the local governments.

Time and effort were needed to gain the trust of children, their parents and the local authorities, to build bridges, said Kalverboer. But, she added, she was most willing to invest this in the children’s interest. “We want to go to the islands twice a year, just like the Ombudsman.”

The National Ombudsman was established for the islands in 2010 and people have increasingly been making use of this entity to file complaints about the functioning or decisions of the local government and the National Government Service Caribbean Netherlands RCN. Van Zutphen said he would like to have a more structural presence on the islands, possibly in the form of a front office where complaints can be filed.

However, the National Ombudsman has been facing financial restrictions as well. The office receives no structural budget to carry out its tasks on the islands, only incidental funds have been provided by the Dutch Government, explained Van Zutphen. The Ombudsman informed former Minister of Home Affairs and Kingdom Relations Ronald Plasterk several times about this matter, but to little or no avail.

Van Zutphen said he had asked the Minister earlier this year about what would happen with the financing for 2018, but so far he has not received a reply. Deciding that this was not the way to go and in recognition of the Ombudsman’s tasks, the Committee for Kingdom Relations immediately decided to seek clarity from the Dutch Government on this matter.

Giving an overview of the work the Ombudsman has done so far, Van Zutphen said his office had carried out several successful interventions in, for example, cases of dismissal payments. Residents also filed complaints about medical referrals, permits, information provided by the government and administrative issues at the Caribbean Netherlands Pension Fund PCN.

The Ombudsman also deals with complaints about the slow Internet at Gwendoline van Putten School in St. Eustatius. The school has not been able to make use of the high-speed Internet of the sea cable that was laid to St. Maarten. “This has an adverse effect on the accessibility of educational material and on the students. We find this problematic,” said Van Zutphen, noting that this issue was still not resolved.

Another task is the carrying out of assessments. The Ombudsman will publish a report soon on the Health Insurance Office ZVK and the medical referrals. A report on the functioning of the Immigration and Naturalisation Service IND is also in the making.

Asked by Member of Parliament (MP) André Bosman of the liberal democratic VVD party whether the Ombudsman noticed a difference in approach and response between Bonaire, St. Eustatius and Saba, Van Zutphen said this varied per island.

According to the Ombudsman, the Saba Government responded quickly, although sometimes the issues were of such a difficult nature that it was hard to address them at once. The relationship with the St. Eustatius Government has been more difficult, he said. Letters largely remained unanswered, which Van Zutphen said he found worrisome. He said communication with the Bonaire Government has been improving, mostly due to the input of Island Governor Edison Reina.

Van Zutphen, who in the past worked as a judge in Curaçao for five years, acknowledged that the islands’ small scale and the local governments’ limited capacity were a challenge. Brain-drain is a problem as well. These issues are of a structural nature and not fixed overnight.

Kalverboer said improving the protection of children’s rights on the islands was a complex, long-term process that required an integral, broad approach. Many aspects are involved in making things better for the children: poverty needs to be tackled, the culture of a harsh upbringing has to be changed and parents must become more actively and positively involved. Commitment of the local governments in this process is indispensable, she said.