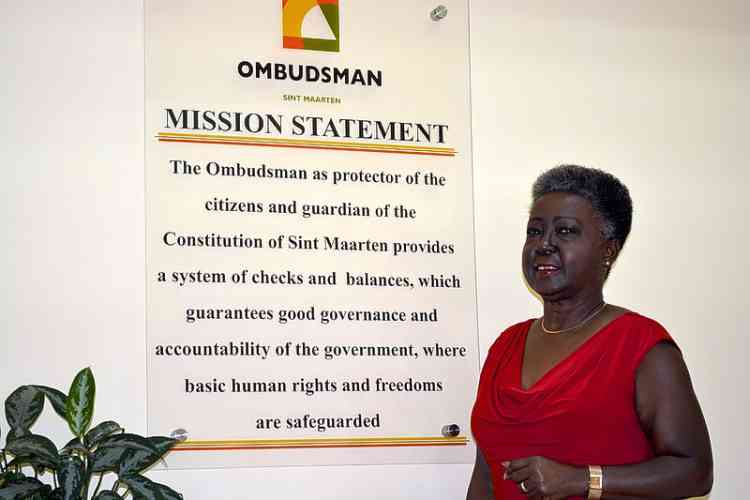 PHILIPSBURG–Ombudsman Nilda Arduin has found no reason to send the approved national ordinance on the establishment of an integrity chamber for the country to the Constitutional Court for review. The law was approved by Parliament on December 18, 2017, and was sent on to the Ombudsman for review.

“Though ahead of the expiration date for action, the Ombudsman finds no reason to address the Constitutional Court for review of the new law,” cited a statement issued by the Ombudsman today, Thursday. The review period legally allotted to the Ombudsman would have expired on January 29.

The new law takes effect not at expiration of the ombudsman’s deadline, but on a date yet to be established by government via national decree. This is in order to provide for proper coordination of the preparatory activities before the law actually takes effect.

“There should be absolute clarity and transparency upfront pertaining to procedures to be followed, and how information acquired by the Integrity Chamber is handled regarding misconduct falling under the category of a ‘criminal charge’,” the Ombudsman pointed out.

Clarity is also needed regarding acts (misconduct) for which disciplinary actions are provided for by the National Ordinance substantive civil servants law (In Dutch: Landsverordening Materieel Ambtenarenrecht/LMA).

Having established that the concerns presented to the Constitutional Court, which lead to the first Ordinance on the Integrity Chamber being squashed, and the contours offered by the Court for consideration by government in drafting a new law were adequately addressed in the ratified law, the Ombudsman considers the rights of the people sufficiently protected by the law.

Considering the history preceding the ratification of the new law, the Ombudsman placed the concerns alleging that this new institution is yet another burden on the people of St. Maarten against the considerations presented in the explanation on the law MvT.

The Ombudsman “concludes it to be a matter whether one considers the glass half full or half empty, and resolves to emphasize the opportunities provided by the law rather than the alleged burdens.”

Integrity is a human characteristic not easily defined by law. Hence the choice of the legislator to refer to ‘suspicion of misconduct’ (‘misstand’) within the public sector rather than ‘integrity breaches’ (‘integriteitsschendingen’).

In addition to its task to advise government regarding integrity matters, the Integrity Chamber is also explicitly charged with the task to engage in continuous awareness campaigns among the public. The MvT refers to the slogan “Integrity starts with me,” and this is vital for the success of the newly to be formed institution.

The Ombudsman further pointed out that the cooperation of the public to report and assist in the investigation of suspicions of misconduct is needed. However, the task to systematically inform the public and widely promote integrity both in the public and private sector of the community provides opportunities for the public in general to recognize and deal with some pressing ills within the society as (a result of) integrity breaches.