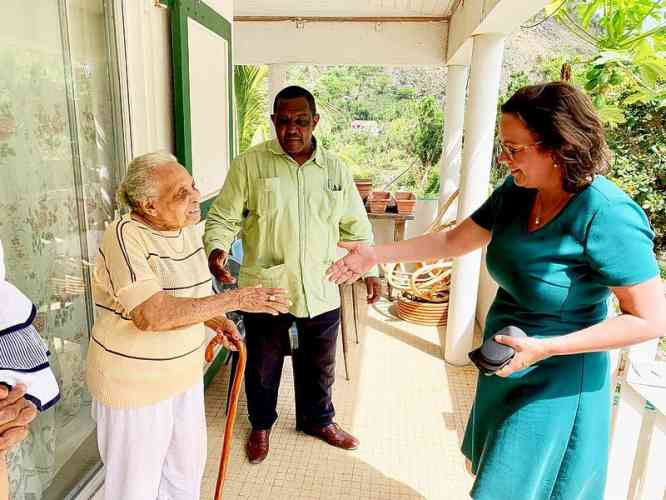 THE HAGUE–The recent report of the National Ombudsman about poverty among elderly persons in Bonaire, St. Eustatius and Saba confirms the necessity of the input of the Dutch government to improve the income position of people in the Caribbean Netherlands and to reduce the high cost of living.

Dutch State Secretary of Social Affairs and Labour Tamara van Ark stated this in response to two separate sets of written questions by Members of the Second Chamber of the Dutch Parliament Antje Diertens of the Democratic Party D66 and Attje Kuiken of the Labour Party PvdA.

The Members of Parliament (MPs) sought clarity after the publication of the report “Eye for the elderly in the Caribbean Netherlands” of National Ombudsman Reinier van Zutphen, which sounded the alarm about poverty among the elderly on the three islands. The report spoke of an “inhumane situation” for the elderly and mentioned the fact that many senior citizens were not getting a decent daily meal.

State Secretary Van Ark acknowledged that there was a “considerable task” for the Dutch government, together with the public entities Bonaire, St. Eustatius and Saba, to improve the situation for the Caribbean Netherlands residents.

“The ambition of the Dutch government to further improve the socio-economic perspective in the Caribbean Netherlands is taking a number of decisive steps forward. With the establishing of a benchmark for the social minimum, the government has made an important step towards a situation where all residents of the Caribbean Netherlands have sufficient income to provide for the minimum cost of living.”

The State Secretary mentioned the BES(t) 4 Kids programme to upgrade day care and after-school care, a reduction of rental expenditures through a rent allowance in 2020, and a further increase of the child allowance, the minimum wage and the social allowances per January 1, 2020. On Saba, the elderly pension AOV will increase by 5 per cent per January 1, 2020, and on St. Eustatius, by 2 per cent. Also, an allowance for single AOV recipients will be introduced per that date.

The State Secretary said she understood the wish of the National Ombudsman to have a clear timeline for the execution of the measures to improve the situation for people on the islands. “The benchmark for the social minimum is an objective towards which we work step by step. Unfortunately, it is not possible at this time to give an exact term as to when the lower cost of living will be achieved.”

According to Van Ark, the Dutch government considered the point of attention of the National Ombudsman to not only focus on the income of the elderly as “valuable.” She acknowledged that in the past period there had been a lot of attention for establishing the social minimum, in particular increasing people’s income and reducing the cost of living.

“It remains important to also focus on improving the facilities for the elderly. In order to improve the living conditions of the elderly people, it is important to not only focus on the income. Also, the cost of living and the availability of facilities is an essential part,” she stated.