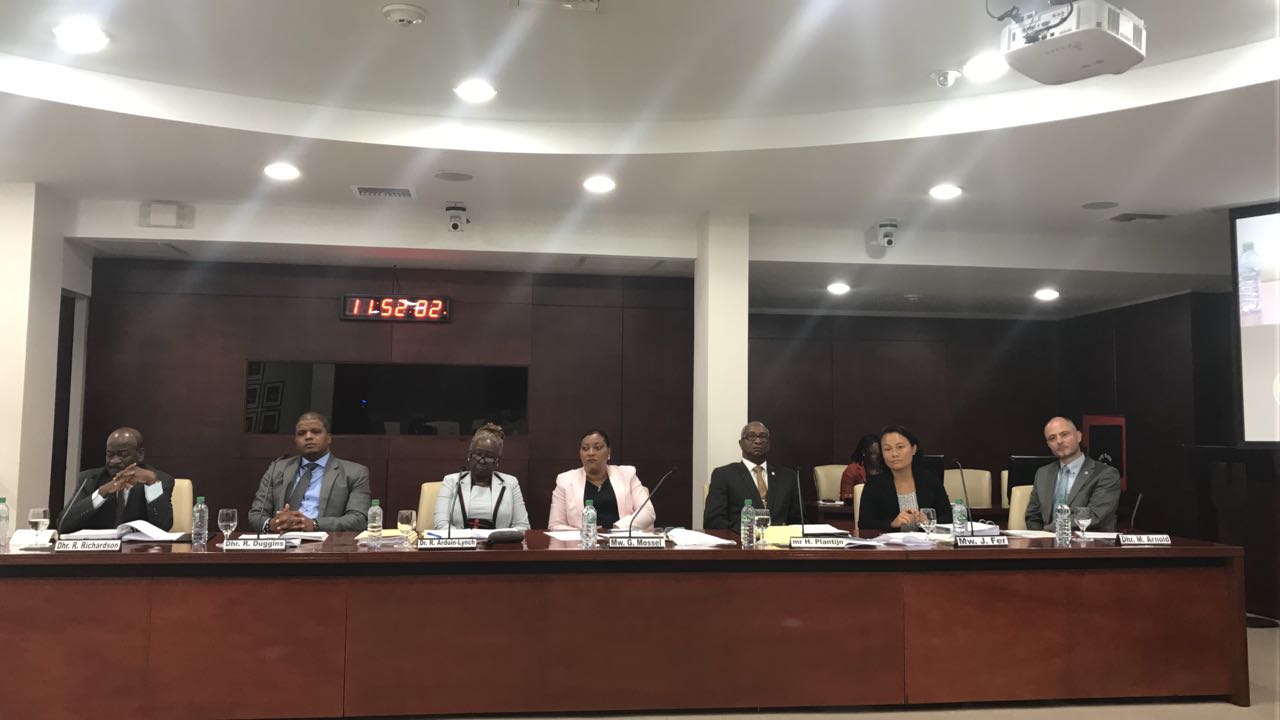 PHILIPSBURG–Make use of the expertise and seek advice from the country’s High Councils of State and do extensive research before approving any law was the firm advice of Ombudsman Nilda Arduin to Members of Parliament (MPs) on Friday.

Arduin was in Parliament along with representatives of the Legal Affairs Department, the Ministry of General Affairs and Parliament Advisor Attorney Ralph Richardson to discuss the verdict of the Constitutional Council of July 7, 2016, that scrapped the law to establish an integrity chamber passed by Parliament on August 15, 2015.

The law was not squashed, because the Ombudsman, who took the law to the Court, was against tackling integrity issues. She challenged the law due to its grave infringement on the right to privacy and its failure to protect people who may be witnesses in case the chamber, which would have far-reaching powers, investigated.

The verdict has taught the country and all involved the importance of the Constitutional Court, Arduin said. Without the mechanism of that Court, the flawed law would have taken effect to the detriment of the wider community.

By getting the opinion of the High Councils such as the Council of Advice and the General Audit Chamber, MPs would avoid missteps as has occurred with the scrapped law. Had MPs opted to send the law back to the Council of Advice when an article of protection was removed to get their stance, the debacle would have been avoided, she noted.

The “entanglement of administrative law and criminal law” was blatant in the law.

Arduin, as well as MPs, were keen to point out they were not against tackling integrity issues. She noted that her issue with the squashed law was its lack of a protection mechanism for the common man.

Using the example of authorities investigating a contractor, she said what if the course of the investigation files are needed from the accountant of the suspect, if that person was to object to handing over all of their computers, because there was information from other clients, he/she would face a fine or jail time.

“Thorough research” and seeking expertise “can have a great impact” when tackling draft laws, Arduin, an attorney by profession, told lawmakers.

While Arduin could not tell MPs what steps to take to confront the challenges faced with the Dutch Government over the integrity chamber, she urged them to look at the many reports compiled by the High Councils of State and other organizations on the topic.

Faced with the Dutch Government forcing the country to accept an integrity chamber it plans to structure and staff, Parliament Chairwoman Sarah Wescot-Williams said the session with the Ombudsman was necessary to dissect the verdict and arm MPs with information to plan the way forward on this topic.

Government should be back at the drawing board to put together a new law on the establishment of the integrity chamber. In the interim, the Dutch Government has issued an instruction for the installing of the chamber, an edict the local government is challenging along with the procedure employed to hand down the instruction to St. Maarten, an autonomous country within the Kingdom.

Democratic Party (DP) MP Perry Geerlings said the Ombudsman has in essence given Parliament “a report card,” but added that the legislature has “a lack of facilities” to carry out its work. “We have limited expertise,” he said, while telling fellow MPs “let’s go do our jobs” in spite of the hurdles.

United St. Maarten Party MP Frans Richardson said Parliament did not draft the squashed laws and fingered MPs, who voted for the law two years ago, as knowing it was flawed and did not afford proper protection for the common man.

The technocrats who worked on the law told the then Council of Ministers it “was ready to go” and they tabled it in Parliament for approval. Richardson said: “We have a duty to check the law.”

The national ordinance to establish an Integrity Chamber was passed by 10 votes to four on August 17, 2015. The four MPs of the then opposition National Alliance (NA) – William Marlin, Silveria Jacobs, George Pantophlet and Christophe Emmanuel – voted against the ordinance.

On January 30, MPs voted across party lines to unanimously pass a motion urging Government to not pursue the establishment of the integrity chamber for the country. The motion had resolved to “vigorously condemn” the action of Dutch Minister of Home Affairs and Kingdom Relations Ronald Plasterk to appoint a quartermaster for the Integrity Chamber that has been deemed unconstitutional by the Constitutional Court and called on the Government of St. Maarten to “use all means available” to block the creation of any institution that is in violation of the laws of the country.

The motion also urged the Government of St. Maarten to inform the Dutch Government that St. Maarten is of the opinion that the protocol between St. Maarten and the Netherlands signed on May 24, 2015, is “no longer executable.”

Government was also advised to present to Parliament its plans of approach to tackle the remaining areas of integrity as reported in the various integrity investigation reports conducted here.