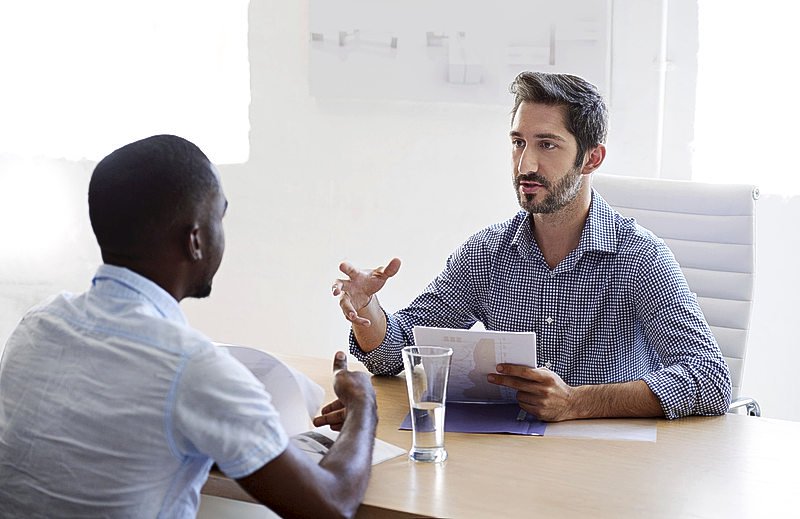 An Ombudsman researcher speaking with a client.

SABA/ST. EUSTATIUS–Two researchers of the National Ombudsman’s office in the Netherlands are currently paying a working visit to the Caribbean Netherlands. Daniel Anon Parreia and Yvonne Kraan are holding open office hours on Bonaire, Saba and St. Eustatius to handle complaints about government.

Since 2011, residents of the three islands who have complaints about government entities can consult Dutch National Ombudsman Reinier van Zutphen and his staff. They deal with problems with the Public Entities, the Tax Department, the Prosecutor’s Office, the Police, the Public Bodies and Government Service Caribbean Netherlands RCN.

Citizens can file complaints via telephone, via the Ombudsman’s website, but also in person. Twice a year the investigators of the National Ombudsman hold open office hours.

On Statia, the Ombudsman’s researchers held consultations on Monday. Consultations on Saba will be held at the office across from the post office in Windwardside on Thursday, 2:00pm-5:00pm. They also visited the island in March.

The two researchers said they had busy schedules during which they met with government representatives for discussions and to receive complaints from residents.

“The consultations in Statia were very well visited. It is very good to notice that people know how to find us,” said Kraan. “Fortunately, many people already know where to find us, but where familiarity is concerned we still have a long way to go.”

She said the nature of complaints that were filed showed a “good mix.” Relatively few complaints concerned the public entity of Statia. There were also complaints about the Tax Department and RCN.

In seeking ways to solve a complaint the Ombudsman does not seek confrontation. “We do not want to confront people; we want to help in solving a problem. That approach is being appreciated by government institutions. We are having good contacts with them,” she said.
Each island has its own problems, culture and atmosphere, and the differences with the Netherlands are big.

“In the Netherlands most complaints are being handled by letter, and most people know how to find their way in seeking redress. On the islands, people do not grab pen and paper so much. They are used to visiting a government entity and trying to speak with somebody, but in complex cases involving lots of emotions it may be helpful to put things in writing,” Kraan said.

The Ombudsman does not make any decisions where complaints are concerned, she explained. People can seek the assistance of a lawyer and go to Court to ask the judge for a decision. In cases where residents may file for objections against government decisions the Ombudsman is not authorised to interfere.