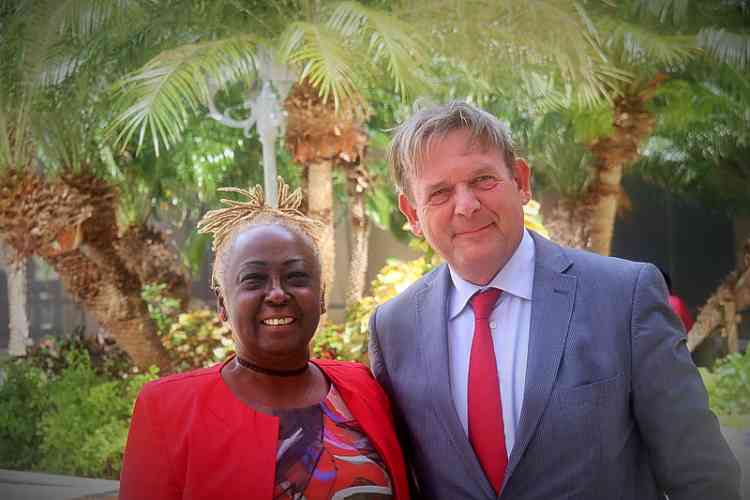 Van Zutphen visited St. Eustatius and Saba earlier this week. He also visited St. Maarten on Thursday and Friday to meet his St. Maarten colleague, Prime Minister Leona Romeo-Marlin, Members of Parliament, Dutch Representative Chris Johnson and non-governmental organisations. He also attended the Governor’s Symposium at American University of the Caribbean School of Medicine.
Van Zutphen stopped by in St. Maarten to experience first-hand how the reconstruction process is going, especially in light of the Trust Fund.
With the reconstruction fund, Dutch experts and civil servants will be coming to the island to work here. The two ombudsmen discussed what both their jurisdictions would be and how to cooperate in case of complaints, where it pertains to the Trust Fund, for example.
“At first sight, one’s impression is that lots has already been done, but there is so much left to do. There are so many roofs that still need to be repaired, houses that need repair. You see the shipwrecks, you see the people working. After all the discussions we held these past few days, I am sure it is going to take a long, long time, and much effort, work and money to get everything right again,” said Van Zutphen.
According to him, it is important for people who rely on assistance from the governments of St. Maarten and the Netherlands or the Trust Find to find their way in filing a complaint when they feel something goes wrong.
“We should not make it too difficult for them,” Van Zutphen said. “We will take care of the procedural part. We will always be there, so that you can knock on my door or on the door of Dr. Arduin. And the two of us will find out how to help people out.”
The Dutch ombudsman said his visit had made clear that many houses in need of repair will not be able to withstand any other hurricane. He said there is some pressure on government now to get this problem dealt with and speed up the process and not hold back because of formal reasons, such as the question of ownership of a property, which oftentimes leaves tenants – literally – out in the rain. “The needs of the residents of St. Maarten should not be hindered by rules,” Van Zutphen stated.
The Ombudsman investigates complaints and writes reports, but Arduin said they have come to realize that it is equally important for them to extend their service to the public as “liaison officers” between what she described as “the most vulnerable” in society and government.
“In paperwork, in bureaucracy sometimes the focus on the target is lost and we really want to emphasize that whatever is going on is about the people… We have identified already that whenever it is necessary and possible Reinier on his side of the ocean will sensitize those involved about the urgencies and the focus on the real people, and here at this end by getting the complaints of the person that doesn’t have a roof, or name it, and that we help them find a way in that big web” in channelling their complaints.
Even though the two Ombudsmen have separate jurisdictions, they are more than willing to cooperate. This already happened when a group of St. Maarten residents got stranded in the Dutch city of Haarlem in the aftermath of Hurricane Irma. The Dutch Ombudsman played a major role in solving this situation, Arduin explained.
On the other hand, Van Zutphen handled a complaint in the Netherlands about something that happened here and obtained information from the St. Maarten office.
St. Eustatius and Saba were the primary goals of Van Zutphen’s visit to the Dutch Caribbean. During his annual visit to these two islands he did not listen to individual complaints but held talks with several officials.
On Saba he discussed problems pertaining to the filing and handling of complaints, for instance, with the civil registry. Both on Saba and Statia there are complaints about the Police, Van Zutphen stated, as well as about Health Insurance Office ZVK.
“On both islands poverty is hindering the people to become active participants in society,” the Ombudsman said. “This creates health problems and problems in education and affects people’s social lives,” he said. “We must put the alleviation of poverty on the agenda. This is a very important unachieved development goal for St. Maarten; for Saba, Statia and Bonaire; and, for the Netherlands.”

October 23, 2021
1
Lieutenant Colonel Wintzer-Wehekind MARIGOT--Following the shocking incident that occurred on the Dutch side between "motorbike joy-riders" and a car, resulting in injuries to a baby, it was agreed the KPSM police force of Sint Maarten and Gendarmerie would increase controls...
Read more

October 23, 2021
1
Lieutenant Colonel Wintzer-Wehekind MARIGOT--Following the shocking incident that occurred on the Dutch side between "motorbike joy-riders" and a car, resulting in injuries to a baby,...