Home Local News Omnisports Hall among buildings damaged by Irma to be demolished | THE... 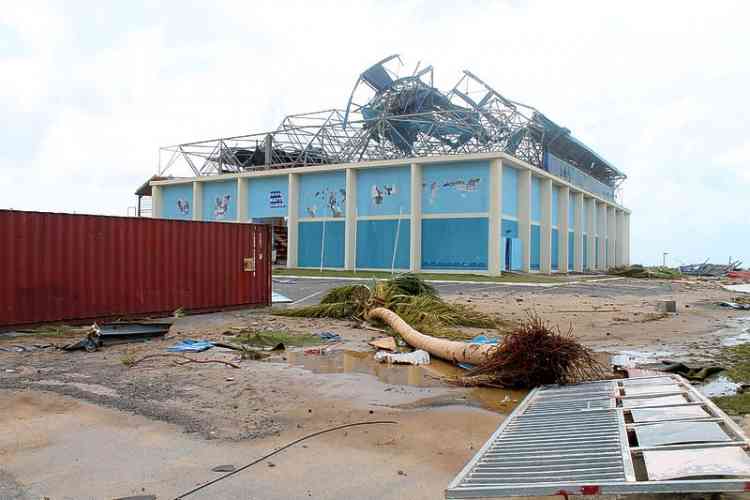 MARIGOT–President Daniel Gibbs went off script at a Territorial Council meeting Thursday to divulge a schedule of demolishing hurricane-damaged public buildings in the territory, a question that has been on the lips of the population for quite some time.

“We have made progress and work is about to begin,” he said. “We are going to propose an additional budget of six million euros to carry out this work. But I want to make it clear that demolition is not done with a snap of the fingers. On the contrary, we are obliged to comply with highly regulated legislation in this area, particularly with regard to the presence of asbestos, which has forced us to carry out diagnostics on each building.”

He disclosed in the short term, starting mid-July, demolition will start on the Galisbay Omnisports Hall with a first phase of removing the roof. That will be followed by demolishing the asbestos-free part of the Emile Larmonie School, the remains of the “Carbets” (beach grill) on Orient Beach and the Cultural Centre in Grand Case.

Other buildings to be demolished, or partly demolished, include the former Gendarmerie building in the centre of Marigot, office of the sports department in the former Bord de Mer School, part of the former Grand Case School and former post office and the Territorial Police station in Marigot.

From mid-August the roof of the damaged media library will be removed, Soualiga College will be secured, as well as the former old hospital on Rue de Fort Louis. Demolition work will also take place at the Thelbert Carti Stadium in French Quarter and part of the Soualiga Collège in Cul-de-Sac.

The building of the former Soualiga Collège will be partly kept and refurbished to house local administrative services at this end of the island, Gibbs noted.
“As for the buildings where asbestos has been detected – for example Albéric Richards Stadium in Sandy Ground – as I said earlier, we are obliged to follow a legal procedure where the technical files are currently being prepared,” he added. “Other major projects such as renovation of Marina Port La Royale and Fort Louis Marina are still to be finalized. Here too, we will be proposing to add 4.2 million euros to the supplementary budget on July 11 so we can start these projects this year.

“The first phase of the works will be to rehabilitate the existing area: repair of the docks and walkways, development and beautification of the common areas. We are currently working on the specifications with a start of work planned for the end of October 2018 in order to be ready for the next tourist season.

“As you can see, this first half of 2018 has been used to implement the reconstruction projects and we can now provide you with a precise timetable of achievements. On the reconstruction of schools, which is under the authority of Vice-President Annick Pétrus, two million euros of expenses have already been paid by the Collectivité to companies in charge of carrying out the emergency work that allowed children to return to schools.

“The heaviest work will be done during the school holidays. In total, we have earmarked a budget of 9.5 million euros for the rehabilitation of 17 public schools, with the top priority being the return of school children to school in optimal conditions at the start of the September school year.

“Under the authority of my 1st Vice-President Valérie Damaseau, the Collectivité also concentrated its efforts on restoration of the territory’s sports facilities. Work is underway on the Concordia, Quartier d’Orléans, La Savane, Grand Case and Sandy Ground sport facilities. The re-opening to the public is scheduled for the beginning of August for most of the facilities and in October for La Savane and Friar’s Bay.

“Since the vote on the original budget last April, the Collectivité has committed 2.9 million euros for sports equipment through public contracts, knowing that 800,000 euros of work has already been invoiced to date.
“With regard to public lighting, the rehabilitation of which is under the authority of Vice-President Steven Patrick, important work remains to be done despite the intervention of the technical services of the local authority and our service provider GETELEC whose technicians are on the ground every day.

“I know that this is a major concern for the safety of our citizens and the economic recovery of the territory, which is why I asked that all the street lamps be replaced on the one hand but also modernized with latest technology. This will be done through an energy performance contract and I will therefore propose to vote a supplementary budget of EUR 3.4 million, which will be submitted to the vote of the Council on July 11.

“I would point out that we already have an available budget of EUR 2.5 million under the European Union Solidarity Fund (EUSF) which provides for identical restoration. On this project, we are planning a rehabilitation over three years with a global investment of 15-million euros.

“The work to bury the electrical and digital networks, which are under the authority of Vice-President Yawo Nyuiadzi, will require two years of work. The organisation between EDF and local operators for the simultaneous installation of the networks is currently being finalised.

“As far as Grand Case is concerned, the electrical networks have been buried. It now remains to add the fibre optic cable and to resurface the Bertin Maurice Boulevard. The next phase of work will concern La Savane with the burial of electrical and digital networks.

“The water and drainage authority (EEASM) under President Dominique Riboud has budgeted 11.5 million euros for the rehabilitation of water networks. Work is in progress, with a major operation for early 2019 which will consist of the total rehabilitation of pipelines in the Grand Case sector.
“I would like to conclude by saying a word about the clean-up campaign that started on May 10 and which we have decided to extend until July 15. The public has free access to the Eco site and 25 skips are available in the neighbourhoods until July 15. I invite you to make the most of these free public services set up by the Collectivité.

With regard to the Collectivité involvement, between September 2017 and April 2018, we collected 67,300 tonnes of waste, while companies collected 10,800 tonnes. Since October 2017, Collectivité services and the Grandes Cayes Eco site have removed 1,800 vehicle wrecks. And there are many more to be dealt with. Here too, the figures are impressive and testify to the work done so far by the public authorities to clean up the territory.”