Home Local News One bra at a time | THE DAILY HERALD 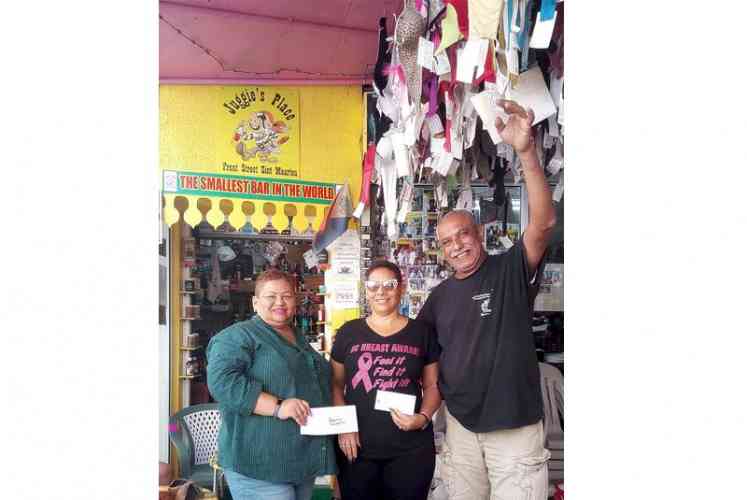 Juggie’s Place, the smallest bar in the world, continues to do its part for breast cancer awareness or as owner Jagdish “Juggie” Amarnaney refers to it, “saving the ‘juggies’ one bra at time.”

His latest donation to Positive Foundation totalled US $600. To date, Juggie’s has contributed US $2,000 to the foundation, thanks to his awareness campaign that started in 2014. The novel idea involved the creation of the “bra chandelier” – people donate bra’s and Juggie hangs them from his ceiling. For each bra donated, he puts aside US $5 for breast cancer awareness.

The campaign is supported by men and women and most importantly breast cancer survivors and those still battling the disease. The chandelier has blossomed to 298 bras and there is still room for many more on “the Ceiling with Feeling,” said Juggie.

The chandelier was saved from Hurricane Irma’s wrath because it was dismantled and stored safely and was reinstalled when Juggie’s reopened a short while after the hurricane. In photo: Juggie presents the cheque to Shelly and Dilys Alphonso of Positive Foundation.