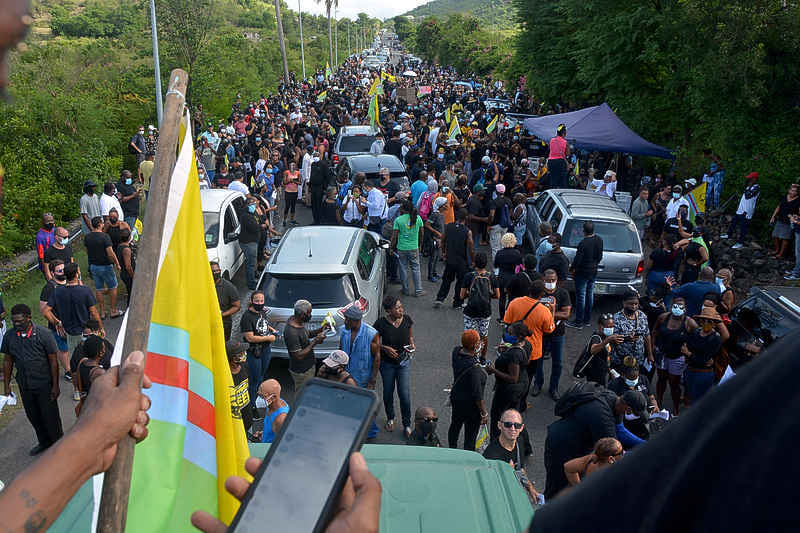 Bird’s-eye view of protestors at the checkpoint. The top of this truck proved to be a handy place to be for speakers. (John Halley photo)

MARIGOT–Free circulation of people and goods has been restored to the way it always has been for the last 372 years, following an intense and often heated negotiation with Préfète Déléguée Sylvie Feucher on Wednesday afternoon, after she gave in to the power of the people.

Border controls in Bellevue and in French Quarter will be lifted immediately while the containers in Cupecoy and Oyster Pond should be removed later today.

Soualiga United negotiators emerged from the Préfecture at 4:30pm after the two-hour meeting to give the good news to reporters. The news was then relayed to the waiting crowd at the checkpoint on the RN7 in Bellevue at 5:00pm

“We wanted to help her understand our vision of St. Martin, our vision of managing together, the importance of unity which we demonstrated brilliantly this morning,” said Lenny Mussington. “The unity of St. Martin people is a guarantee of victory. The most important message that comes out of this is that we have to assume our responsibility now. This was not a defeat for her or a victory for us, it’s just that we wanted to express our vision based on our culture. We felt that she was frustrated by the end, her pride, her ego dented.”

Aline Choisy added: “The Préfète informed us that she is putting in place a workshop with the Dutch side that was supposed to be tomorrow but because the Director General of the regional health agency ARS Valérie Denux is in France this won’t be done until next Tuesday. So, on Tuesday they will be meeting Collective Prevention Services (CPS). The idea is to put a common testing centre in place so they could find one protocol to work on both sides of the island.”

While the motorcade plan did not work out as expected, it was more than compensated for by a massive turnout of protestors on foot who gathered at the Bellevue and causeway (Cole Bay) roundabouts from 7:00am. Most were dressed in black and many carried Unity Flags. Organisers said more than 2,000 people turned out for the protest, contrary to the earlier 700 number stated by the State’s police services.

The two groups began their march from the respective starting points to meet at the Gendarmerie checkpoint chanting, “One Island, One People,” and “A people united will never be defeated.” Collective cheers rang out when the two groups met. Such was the overwhelming number of people there that the Gendarmerie had no option but to take down its tent and barriers, moving them to the side of the road, leaving Gendarmes to watch the proceedings.

Commandant Stéphan Basso was present at the checkpoint observing the protest, which went off peacefully throughout. There was no sign of any Gendarme reinforcements being brought in. There were a few cars in line from the Dutch side end but no attempts to pass through the checkpoint. Most likely not wanting to aggravate the situation, vehicles were not controlled or authorisations requested after an earlier reaction from the crowd.

The marchers moved on down to the border monument to hear some speakers before the Unity Flag was raised in a short ceremony.

Many elected officials were seen joining in the protest from both island governments. Spotted in the crowd were St. Maarten Prime Minister Silveria Jacobs, member of Parliament Sarah Wescot-Williams and Minister of Education, Sport, Youth and Culture Rodolphe Samuel. From the French side there were President of the Collectivité Daniel Gibbs, Vice-President Valérie Damaseau, Senator Guillaume Arnell, and Territorial Councillors.

“We are here in solidarity with our people,” said Jacobs, who stayed until about 9:00am before having to return to government. “From the beginning we stated we saw no need for border controls as long as we could sit down as governments and agree on protocols, synchronising them to avoid this closure.

“The Préfète took her decision. We lobbied for the opening and continue to do so. We will be meeting tomorrow to have more discussion on it and hopefully to resolve the issue. In any case we will continue to have meetings with the Collectivité and the Préfète.”

Jacobs said about six ministers and several parliamentarians from the Dutch side participated in the protest.

Despite the huge gathering, there were no signs from the Préfecture that the border controls would be removed, prompting organiser Lenny Mussington to consider moving to “phase two” of the protest. The crowd was asked to stay put at the checkpoint. “If we move, we lose,” he said.

Finally, it was announced the Préfète would receive a delegation from Soualiga United at 11:00am, but that was then postponed to 2:30pm.

Co-organiser Shujah Reiph urged the elected officials to take photos of the protest and send them to their superiors in France, with the message that “we are standing bold and brave in defiance of a dictatorship.”

“Those hills we are looking at, 26 of our ancestors ran from that plantation and crossed the border, expecting to be caught and killed. That blood is running through all of our veins. You have decided to be on the right side of history today, you have decided to stand firm and liberate your country,” he told the gathering.

The crowd at the checkpoint was reduced significantly due to the heat and limited areas for shade, but many still waited for news from the 2:30pm meeting, fortified by deliveries of Kentucky Fried Chicken, Domino’s Pizza, and bottled water.

The French Overseas Ministry had reportedly left the decision about removing the border controls to the Préfète to make, with the Ministry supporting whatever she decided.