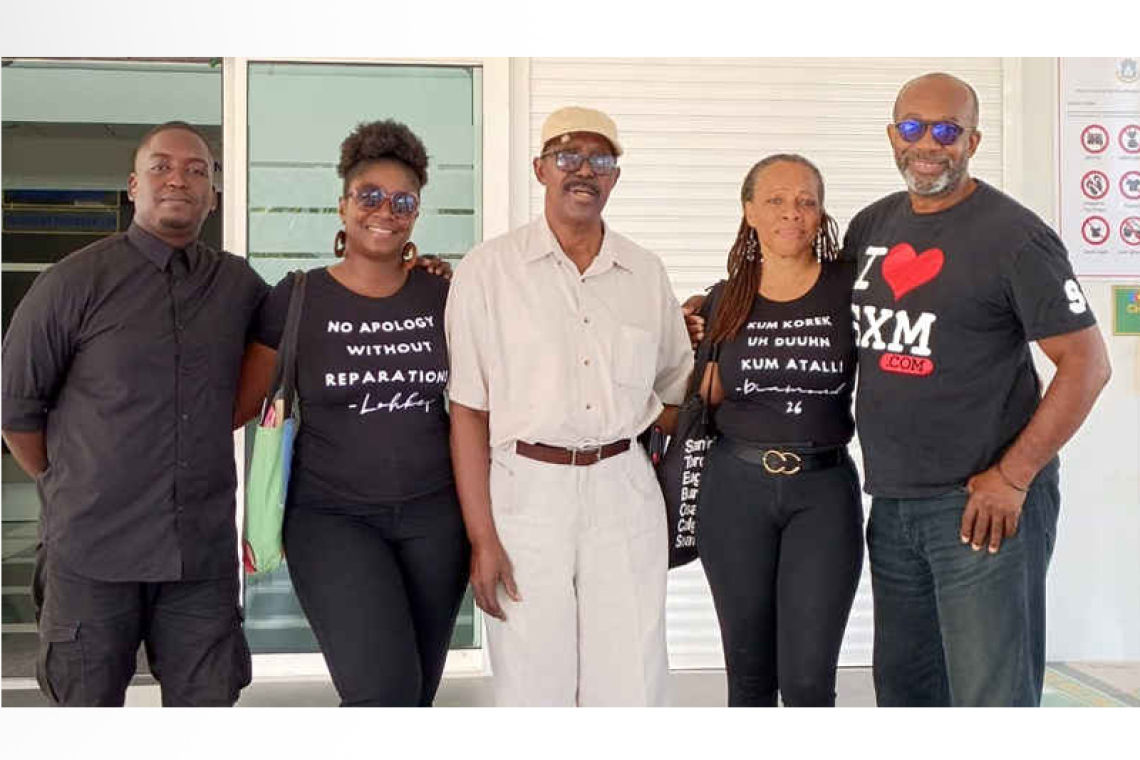 One SXM members and leading St. Martin activists at the Government Administration

Building. The group presented the One SXM “Petition Against Accepting Dutch ‘Apology’ for ‘Slavery Past’ without reparations to Prime Minister Silveria Jacobs (12/19/22). (Photo CLF courtesy)

PHILIPSBURG–The One SXM Association said on Tuesday that it has taken note of the statement made on December 19, by Dutch Prime Minister Mark Rutte in The Hague, which was subsequently rendered in English in St. Maarten by Dutch Minister of Health, Welfare, and Sport, Ernst Kuipers, regarding the “apology” for slavery “past” on behalf of the government of the Kingdom of the Netherlands. 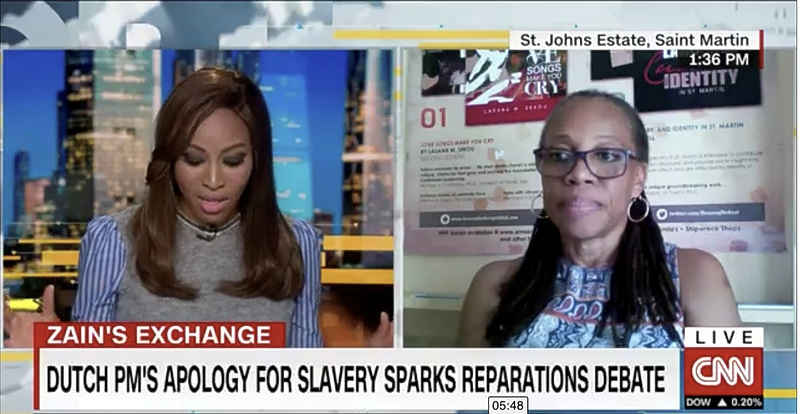 Rhoda Arrindell, president of One SXM on CNN One World with Zain Asher on 12/20/22.

“While we recognise this step away from the previous official position of the Dutch government on the issue, we cannot accept the ‘apology’ because it falls completely short of what a sincere apology should be,” said One SXM.

Furthermore, stated One SXM, it is in “full agreement with the response and sentiments expressed by the honourable Prime Minister of [St. Maarten] Silveria Jacobs on the matter and how we were rushed to this point, as well as the intervention by Clara Reyes, one of St. Martin’s cultural leaders, and we fully endorse their positions.”

“We note with appreciation that virtually all the invited panellists agreed with our position that an apology without reparations does not live up to the standards of a sincere apology,” said Dr. Rhoda Arrindell, president of One SXM.

Arrindell, who discussed the association’s position on CNN on Tuesday https://bit.ly/3YzvVtP, also said that “while some may applaud the apparent change of mind and initiative taken by the Dutch Prime Minister,” she is not impressed by references to ancestral names like Lokhay, a legend who was “a symbol of the innumerable persons that suffered and survived the atrocities committed by the Dutch during the evil period of Slavery in [St. Maarten].

“To use the Dutch-commissioned report ‘Chains of the Past,’ which was put together without any input from or consultation with the people of [St. Maarten], as the starting point for discussions in [St. Maarten], is again a very colonial and disrespectful approach,” she added.

In her own response to the Dutch “apology,” One SXM member Aishira Cicilia asked, “Did we get an apology with a commitment to reparations? No. “As we’ve said repeatedly, reparations are not just about financial compensation, but about reparatory justice for our people—past, present, and future. Therefore, my stance remains unchanged: I do not accept an apology without reparations.”

Weighing in on the matter, One SXM member Erwin Romney said, “As a young St. Martiner, I feel that the apology felt more rehearsed than sincere. The use of ‘we’ sounds like we went through the same situation. If you truly understood how we feel, you wouldn’t use the word ‘recovery,’ for example, instead of talking about reparations.”

In reiterating its call on the territory’s Parliament to hold debates on the issues related to the evil system of slavery and its nefarious effects on modern-day St. Martin, One SXM maintains its stand for “government to speed up the announced establishment of a Slavery and Reparations Committee,” said Arrindell.

“As far as One SXM is concerned, our work continues, and we are calling on the people of [St. Maarten] to remain engaged and to support the initiatives we will be making public,” said Arrindell.