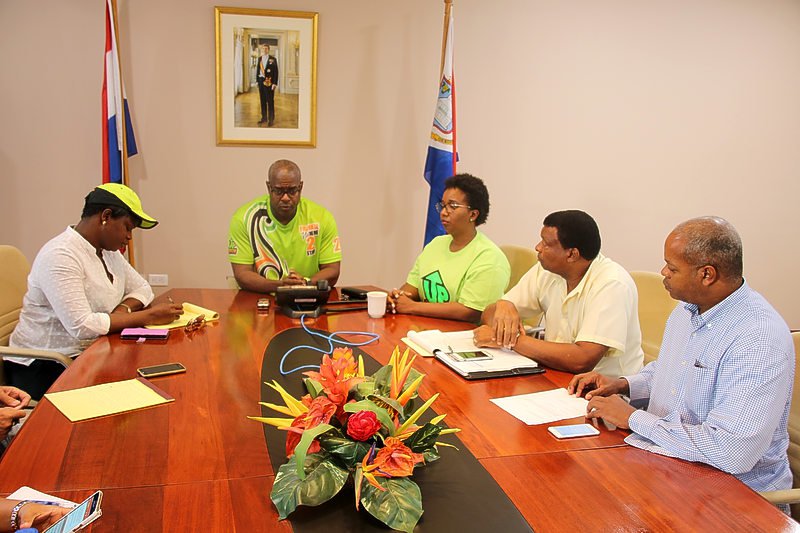 PHILIPSBURG–Opposition Members of Parliament have requested an urgent meeting of the legislature with Justice Minister Edson Kirindongo to get answers about the fatal shooting in Pointe Blanche Prison last week that left one inmate dead. The inmate was shot by another inmate with a gun that was smuggled into the secured facility.

United People’s (UP) party deputy leader MP Franklin Meyers said at a press conference held in Parliament House Tuesday, the shooting is of “grave concern” especially since the Minister has not informed the public about what is being done following the shooting.

Like Meyers, MP Leona Marlin-Romeo said, “It is a critical situation” and requires answers from the minister.

He questioned whether a suspect was in custody, and how did a gun get in the prison. “What’s the most dangerous thing is we have no system to back track [such as camera footage – Ed.] … This is not a political issue. It concerns us as citizens. It’s on a higher plane than the politics,” said Meyers.

When asked if he had not taken note of the fact that nine suspects have been identified in the shooting, Meyers said he was aware, but wanted to hear from the Minister what was happening.

He also queried what happened to the NAf.12 million sent by the former UP-led Government for upgrades at the prison. “Why didn’t the present government see it as a priority?” he questioned.

Meyers, along with fellow MPs Tamara Leonard and Dr. Lloyd Richardson (UP) and Cornelius de Weever and Marlin-Romeo (independent), support UP leader MP Theo Heyliger’s call for Kirindongo to resign immediately as minister. “Someone has to be responsible,” he said.

Whether that someone should also include the Prison Director, Meyers said the director has to work with the budget allocated to him by the Minister, and it is the Minister who has control over the dispersing of funds.

MP Leonard added that the Prison Director has to prove he was aware of the shortcomings in prison, and had requested assistance from the Minister. She also questioned why the plans for the prison expansion were halted by the present National Alliance (NA)-led Government. “What was the plan? Where is it?”

Dr. Richardson questioned why the camera system in prison is “defective” leaving a gap on the narrative of the investigation into the deadly shooting. “There are too many questions … This [prison – Ed.] is where security has to be maximum.” He also queried what has happened to the offer from Bonaire for assistance with the justice chain.

Due to safety concerns, Mental Health Foundation has “put on hold” its work in the prison, said De Weever. Some 40 per cent of inmates need the assistance of the foundation and are left without support, he said. People in “state custody” should be taken care of.

Meanwhile, governing coalition partner Democratic Party (DP) leader Sarah Wescot-Williams had announced on Monday she had asked her coalition partners to cooperate with her to bring Kirindongo to Parliament.

A minimum of three MPs is needed to summon a sitting of Parliament.