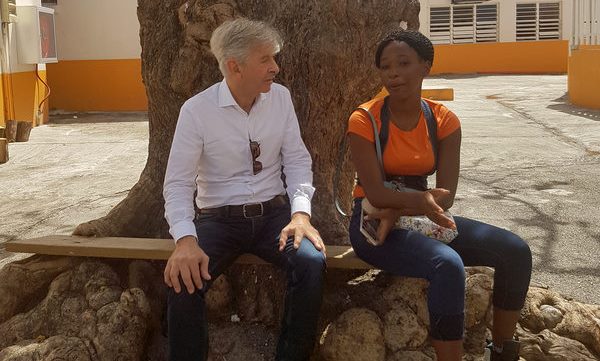 The visiting Minister, who never faced a category five-plus hurricane, lived it through his chats with several pupils of Oranje Primary School when he visited on Tuesday morning.
Obando was in her home on Back Street with her parents when her roof was clawed off by Irma. “My father was nervous,” she said. The Minister told her and her classmates he hopes they would discuss their experiences with each other and with their teachers.
Plasterk went from desk to desk in the classroom of teacher Petra Ming talking to pupils about their hurricane stories, among which surfaced some about missing friends who are yet to return to the classroom.
He also spoke to pupils about if they were happy to be back in school and what careers they planned to follow in the future. He was greeted by a myriad of responses.
One pupil wanted to be a soldier in the United States Army. The Minister asked why not the Netherlands Army, “because they were pretty good too.”
Chatty and happy with the attention paid to them, another pupil shouted out: “I want to be a scientist!” To that Plasterk said: “You want to be a scientist? I am a scientist. That’s cool. That’s a great choice.”
After leaving the classroom, Plasterk said, “It has been a traumatic experience for the kids. I talked to the teacher and asked ‘are you ready to handle that?’” He urged teachers to note the stories of the children and compile a report “on the first impression of how they are dealing psychologically.”
The report would go a long way in establishing the support teachers need from his Ministry “to guide the children.”
“Some of these children were saying the roof was blown off. They were scared to death … father was very nervous. Kids also pick up if the parents feel in control or not. So this isn’t over yet,” Plasterk said.
The Dutch military has done a great job with the initial repair to schools, he said. But, “there is an underlying damage to the society that always lands in the school … if the parents are out of work, if the income is too low, the food is not good enough and then the kids come to school the teacher will have to deal with that.”
He added, “It is not only the building issue, there is also other damage … if we can be of any help as a kingdom on that side, we are happy to do that.”

Art for coping
Ming, like her pupils, is happy to be back in class. Her class usually comprises 22 pupils; only 16 have reported to school. The status of the remainder is not clear. They could have been evacuated or staying elsewhere with relatives.
Coping with the aftermath of Irma is happening in the classroom through the telling of stories, drawings and writing by the pupils.
Pupils are “a little calm” and are enjoying the activities now, Ming told The Daily Herald. However, she has some worry about how they will manage once the regular curriculum and study pressure return.
For now, she has allowed them to sit together with friends, a non-standard placement in the classroom. “I am letting them sit with friends who they are comfortable with. They are healing with each other.”
Four classes for Groups Seven and Eight are in session. Some 50 pupils form the classes, School head Sonia Parrotte-Warner told this newspaper.
Quite a number of pupils from the two groups have not yet returned to the classroom. Parrotte-Warner has attributed this to homelessness and displacement. “There is a lot of homelessness. Some also don’t have electricity or water.”
The loss of school uniforms and supplies are also factors in low attendance, she said, even though the school has not placed strict emphasis on pupils in uniform.

Food and flies
Asked what is still immediately needed, Parrotte-Warner said “We are working with what we have for now, but we do need a telephone line. This is vital for communication.”
The continued provision of breakfast and lunch boxes is also needed, she said. Government does provide breakfast boxes, but there is still need for more and for a sustained programme at the school now more than ever.
Bottles of water are received and handed out to the pupils every day.
Child-friendly insect-repellent is also welcomed by the school. Flies are a bother as they are in many areas of the country.

Angels in green
It is in part thanks to the Royal Dutch Marines deployed to St. Maarten that the country’s oldest school is back in session as of September 28.
A contingent of seven soldiers, assigned to the school, repaired damaged roof sections and cleared a huge tree from the schoolyard in the past three weeks. The group was fondly referred to by school officials as “angels in green” for their service to the school.
The interior of some school buildings still need attention. Government is expected to send a contractor to take care of the damaged ceilings and other finishing.
Parrotte-Warner commended the military men, comprising mostly soldiers named Marc and Kevin. Each one was presented with a token of appreciation from the school.