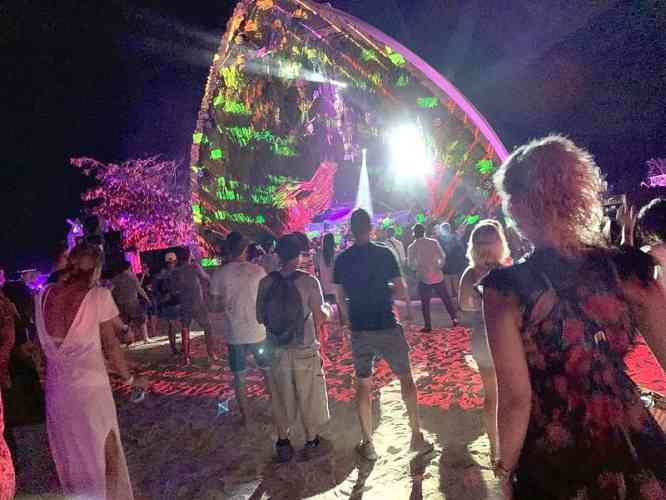 Fans listen to the music in front of the stage in Happy Bay during the SXM Festival in March. (Robert Luckock photo)

MARIGOT–Organisers have released some of the facts and figures from the 2019 SXM Festival that was held March 13-19, with 2019 being the year the festival returned bigger and better, mixing super locations, one-of-a kind stage designs and world class deejays.

“The attendance at Refuge and Lotus were as follows: the three events at Lotus were at full capacity with 2,063 festival guests, while at Refuge the two events there seemed under-attended because it is such a big space, yet a total attendance was recorded of 1,256. The boat party sold out at 180 and Karakter was over-crowded by about 600 people and it was the same at the Sunday evening event.

“We did not control the bracelets so we do not have the exact numbers. The Sunrise party had a low attendance of 247 people because the management of Lotus made a mistake and thought the event was ending at 4:00am. Since the party started at 6:00am festival guests did not want to wait two hours and chose to rest.

“With a bigger marketing budget, we can definitely invest in more campaigns on Instagram and Facebook. We made the most out of the US $87,000 total spent. Potential festival attendees were still scared to visit the island due to press articles saying the island was still recovering from Hurricane Irma. The Fyre Festival documentary was released at the peak of our sales and definitely cost us an estimated 500 full passes and 250 weekend passes.

“Our engaged audience continues to grow and our Facebook page remains the most visited in relation to the island with 60,000 fans. When you Google SXM, the festival is at the top of the search even before SXM Airport.

“Facebook and Instagram are our principal marketing channels and we performed really well on both: more than five million in Reach, more than 17 million Ad Impressions and more than 1.6 million in Post and Page Engagement. Our newsletters had an average open rate of 30 per cent until two months before the event when the open rate jumped to 85 per cent.

“For 2020 we will expand our reach by using other channels such as YouTube Video Ads, Organic Posts and Display Advertising. Most hashtags used were: #SXMFestival2019, #IslandStyle and #TakeMeBack. An eight-minute documentary about SXM Festival will run on BBC World reaching 360 million viewers.

“Our customer service received a lot of positive feedback during and after the event regarding all aspects of our festival. The reviews by festival guests overwhelmingly describe SXM Festival as the most beautiful festival they have ever attended. Generally, the perceived value of the event was worth more than the price of the ticket. The hospitality of the locals and the event’s organization were commonly noted among guest comments.

“No refund has been claimed for dissatisfaction. We reimbursed nine tickets as a courtesy to those who had family- or medical-related issues preventing them from attending the festival. This was very much appreciated by the individuals who reached out to us for a refund. A survey will be sent out to all our 2019 attendees, as we have done in past editions, to learn how we can improve the experience of our guests and have an even higher satisfaction rate.”