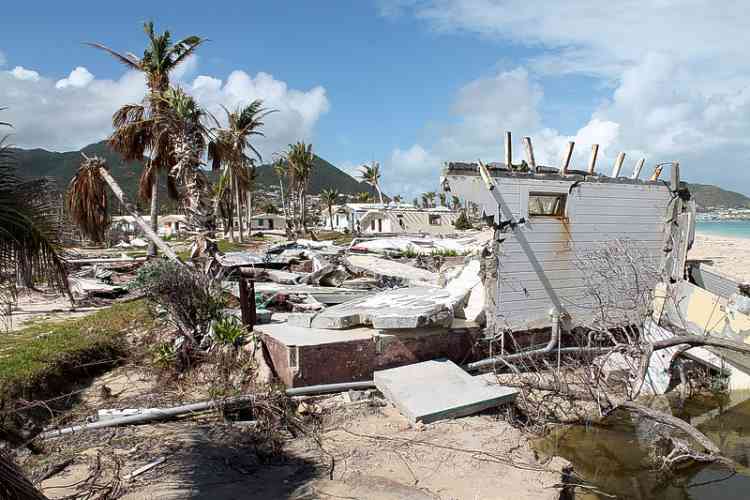 MARIGOT–Orient Beach Club (OBC) has gone to court to file for administration, citing its inability to continue operating what is left of the naturist Club Orient Resort through another high season with no income whatsoever. The resort remains in ruins one year after Hurricane Irma tore through the property last September.

The news was announced on the resort’s Facebook page and will come as a blow to the Collectivité already struggling to open hotel rooms.

OBC is the management company that operates the resort and employs the staff, not be confused with Co-Propriété (COPRO), similar to a homeowners association, which owns the land on which Club Orient was built and is responsible for the majority of structures.

OBC received its insurance money in full on October 31, 2017, which included business interruption insurance. It has now been more than a year that OBC has been waiting for the COPRO to receive its money to allow rebuilding to begin.

OBC representative Steve Payne told The Daily Herald that COPRO is yet to settle with its insurance carrier and cannot rebuild without insurance loss.

Payne added that the government’s partial unemployment scheme (chomage partiel), incidentally extended until the end of this year, has taken a heavy toll.

“We are paying 85 per cent of the wages and get reimbursed by the French government at the same percentage, but only at minimum wage. With some retirements we’ve gone from 130 employees down to around 90. It’s not so bad when wages are low, but when you have someone on 4,000 euros a month, that’s a big difference.

“We were comfortable paying the ‘chomage’ as COPRO believed we would have at least some of our units ready for the high season starting in November/December. This prognostication, unfortunately, has proven not to be the case.

“Our in-season payroll, before tax and social charges, was running at half a million euros. Not only that, we have to keep our website up and our accounting running. There’s an office to run and a staff of three. We have contracts with our reservation systems. Advance deposits have to be returned. It all adds up.”

Payne explained that even if COPRO were to receive its money in October or November 2018, it could not complete any of the necessary rebuilding and repair until the summer or even longer.

“OBC cannot afford to continue to operate while missing two full high seasons, last year and this coming year. It’s a regrettable situation, particularly as President Daniel Gibbs and the Collectivité have been immensely supportive.”

OBC expects to be legally closing its doors over the next 30 days with the assistance of a government liquidator.

“We have just about completed contacting all the people who still had advance deposits on hold for a future stay,” Payne wrote on the Facebook page. “To all of you who were kind enough to donate them or delay asking for their return, you are a big reason why we have been able to continue to survive this long. Thank you very much for your help.

“Now does this mean Club Orient is finished? No. It merely means the management company OBC, which is the employer and operator of the revenue-producing areas, is closing. Once COPRO receives its funds and the re-building commences, a new management company would have to emerge to operate Club Orient. Hopefully, most of the same staff will still be available and return.

“Once again, the only reason OBC must close is because it has no resort to manage and no way to continue to pay the staff without revenue being generated. So, this is a very sad time for all of us. Many of us have given years and often decades of our lives to Club Orient as employees. Most of us have never felt like employees, but more like being a part of an extended worldwide family.

“We cannot predict what will happen next, as we will not be involved. We know COPRO is continuing in its efforts to re-build Club Orient and has contracts in place, once the legal and insurance issues are resolved. Our website and Facebook page will remain up for at least the next few months, and we have listed an email address to be able to contact a representative of Club Orient who is on the island.

“Thanks to all of you for your support over the years and we have missed seeing you this last year. We are heartbroken this mess has not yet been rectified and hope that the COPRO will be able to rebuild very soon, so we can once again welcome all of you back to paradise,” the post concluded.