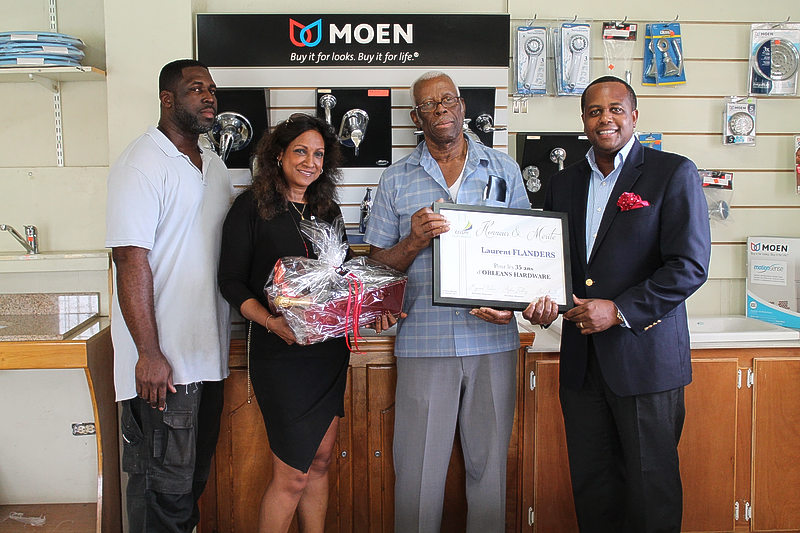 Chamber of Commerce President Jean Arnell (right) presents Laurent Flanders with an “honour and merit” plaque for serving the community for 35 years. Looking on is Chamber of Commerce Director Magguy Gumbs with flowers and Mervin “Junior” Flanders (far left).

MARIGOT–On Saturday, February 25, the enduring Orléans Hardware store celebrated its 35th anniversary of doing business in French Quarter with an open house for its loyal customers.

Time flies, and it was not long ago that this newspaper commemorated the store’s 25th anniversary with an article.

In typically modest fashion, owner Laurent Flanders quietly welcomes this major milestone with a great deal of satisfaction, putting it down to faith in God, hard work, and providing customers with what they need.

“It’s been a challenge, we’ve had ups and downs, but we’re still here, we’re still happy and at the end of the day it is rewarding,” he says.

It’s comforting to note this friendly neighbourhood store has survived the onslaught of Ace megastores when other stores have succumbed, a testament to its resilience.

Orléans Hardware opened on February 22, 1982, in its current location in a very small space, 10 by 16ft Flanders remembers, and over the years it gradually expanded.

At the time the main hardware stores were on the Dutch side; Caribe Lumber and Utilities.

“The store is a family business. I’m a businessman now, but back then I was a carpenter by trade in the construction field so I could do a lot of the expansion work myself. I was the only employee in the beginning, doing the deliveries and picking up the cargo,” he recalls.

“In the early days we purchased from Antilles Distributors and we also worked with Puerto Rico, Miami, and Guadeloupe. We started off stocking household hardware and then progressed into building materials. That hasn’t changed over the years. At one point we sold furniture, but that didn’t last as the competition was too strong.”

“Some people encouraged me to relocate to the Dutch side, but I said no, I prefer to serve the people of French Quarter. Besides our family roots are here. We have a loyal customer base and without them you have no business. We learnt that early on, listening to their needs. “The business now has 10 employees, including two who have been working for 25 to 30 years.

“My daughter has 30 years here and she plays a key role in the business,” he notes.

When it comes to opening a business, Flanders has a message for young people.

“Never let anybody tell you, you can’t, because where’s there’s a will there’s a way. I’m a God-fearing man and I believe if he calls you he will help you. If I’m here today it’s because of that. I have no diplomas nor went to special schools. You’ve got to have that calling and know where your niche is. I always had the desire to do hardware. When I told my brother I wanted to open a hardware store he didn’t question it, and went along with me.” It hasn’t all been hard work, however. Flanders is a former cricketer and represented the island on occasions, and he loves Dominoes. “I’m a gamer,” he says with a laugh.

Chamber of Commerce President Jean Arnell, who also hails from French Quarter and knows the family well, on Wednesday presented Flanders with a plaque.

“It’s important to recognise the man and the family for their entrepreneurial engagement; doing business on a daily basis is tough, anywhere, and doing it for 35 years is commendable,” said Arnell. “I have a great deal of admiration for him. From the day I started business he has been a father to me in terms of advising me and encouraging me to run for President of the Chamber of Commerce.

“Secondly, we are recognising a community server through his involvement in sports associations, the Orléans business association, the church, and Rotary. The family takes giving back to society very seriously, even when business is tough.

“It’s important to recognise the entrepreneurship, but also the service to the community, especially at a time when we see less and less St. Martiners in business. We know the challenges of transferring business from one generation to another.  But it has been successful here.”