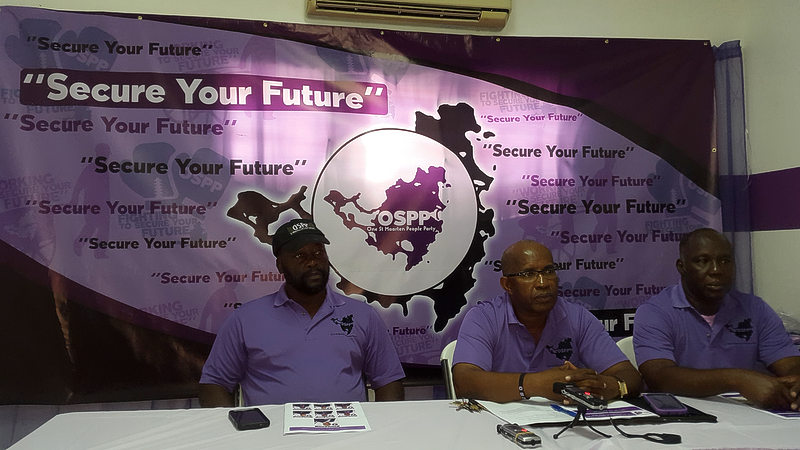 PHILIPSBURG–The implementation of a garbage tax and an environment tax are on the income generating agenda of the One St. Maarten People Party (OSPP). These ideas are part of the party’s manifesto launched on Monday morning.

“Always Fighting to Secure Your Future” is the theme of  manifesto for the September 26 Parliamentary Elections.

Party leader former Island Councilman Leonard “Lenny” Priest described the manifesto as “a people manifesto” that was formulated with “a bottom up approach.”

The “garbage tax” of NAf 25 for residents and NAf 50 for businesses is envisioned by the party. That garbage tax revenue will be used to tackle the landfill.

The levying of an environment tax of NAf 36 on visitors is proposed by the party. The funds will be used to clean up Great Salt Pond.

Income generating measures also proposed by the party are the introduction of a tourist driver’s licence and the placement of import duty on tobacco and alcohol.

The economy was a major point for OSPP. The party wants to tackle the contracting high season and chronic seasonal unemployment.

A cruise conversion programme “to entice” cruise passengers to come back to the country in the traditional off-season and the creation of a gospel music festival are ideas of the purple party.

Fostering agriculture also on the agenda of the party. Priest said the setting up a agriculture station and reserving two scholarships for agriculture studies are goals of OSPP.

Getting Caribbean people back to the country to shoppers will also be pursued by the party of nine candidates.

A million guilders will be reserved in the 2017 budget for stimulating small businesses once OSPP is voted into Parliament.

All agriculture products from the country will be exempted from the five per cent Turnover Tax.
No tax on old age pension and the establishment of a sports lottery to aid organisations in development their teams and competitions.

To reduce the burden on small businesses, OSPP will work on a ln exemption from income tax for every small business for the first two years operations and a general reduction of profit tax from 33 per cent to 23 per cent.
On the employment front, OSPP visions the fostering of trained local carpenters, masons and builders and is prepared to give companies incentives to employ youngsters.

Education from kindergarten to the National Institute for Professional Advancement  (NIPA) be free for residents  Priest said. Reduced utilities fees for schools to aid and boost education are also on the party’s agenda.

Pulling more money into the pockets of the people via an increase in the monthly pension amount and the introduction of a living wage are ideas Priest shared with the press.

As proposed in the past, the party called for the landfill to Cay Bay and for the creation of a properly managed landfill. The establishment of the solar energy farm in same area where land is available to government is project OSPP has in its sights.

OSPP candidate Elton Jones said at the launch, “Much more can be done to make our economy more viable.” He also pointed out that the education system also needs to be address to lessen the country’s dependency on imported labour.

The party without any seat in the present Parliament considers itself the country’s shadow government as it has been constantly peppered past and present governments with questions of community concerns and recommendations for “workable solutions.”
Source: Daily Herald
OSPP plans to implement garbage and enviro taxes