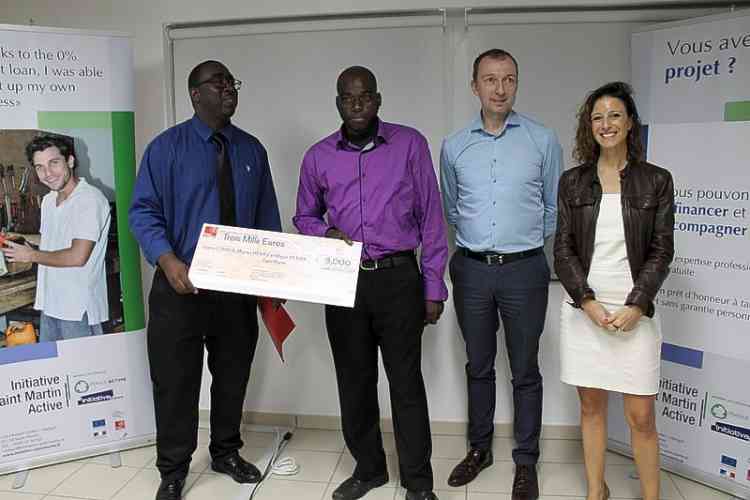 MARIGOT–A project to transport tourists around the historical sites of Marigot on a 20-seater electric train was the winner of Initiatives St. Martin Active’s third annual Innovation Competition, it was announced at an awards ceremony on Monday evening.

The project, Oualichi Express, presented by Justin Conner and his cousins Miguel and Marino Henry, was one of 25 projects submitted by candidates, before they were reduced by the jury to a final selection of seven.

The winning project earned the first prize of 3,000 euros. The second place prize of 2,000 euros went to Steve Bercy for his project Air Zoom. Through an advertising service, Air Zoon enhances the image of its customers (hotels, restaurants, communities, etc.) and allows them to offer a free Wi-Fi service to their own customers.
There was no third prize this year as no projects met the required criteria. The cash prizes were sponsored by Caisse des Dépôts et Consignations and the Chamber of Commerce (CCISM).

The Remarkable Initiative Prize was awarded to Katell Ollivier and Simon Suppa for their project La Kasa Mapou. The pair is working to create the first eco-friendly hostel on the island. Their ambition is to make the site as ecological as possible and to create a place of exchange and social bond between residents and visitors of the island in the heart of the traditional village of Grand Case.

Miguel Henry disclosed that they have already purchased their battery-powered electric train, which had sustained some damage during the hurricanes.
“It’s a train that travels about 20-25 mph and carries 20 passengers. It will pass around the historical sites and monuments and a recorded narration will be in seven languages. You simply choose the language,” Henry explained. “We’re hoping to get the train running by June or July of this year. We will also propose to the tourists a traditional local dish and a natural drink.

“We will be making sure the repairs are done well. We’re not in a rush. We want everything to be done perfectly so we can offer an excellent excursion.”
The four other short-listed candidates recognized for their projects included Isabelle Agnes-Lake. Her project Bella Box plans to offer a monthly subscription to all women to take care of themselves at the time of their period. The box contains not only feminine hygiene products but also natural products. The idea is to alternate the products in the box and add surprises. On the same principle as boxes that already exist in several countries, subscribers will receive their Bella Box directly at home, by parcel.

Jean-Philippe Dupont, Jérôme Miceli and Olivier Flanders presented La Centrale des Artisans. This is a cooperative gathering of professionals in building and public works (BTP) allowing the pooling of human and material resources. In the long term, the second objective is to train young people in the construction industry.
Amandyn Morand presented Jus en Folie. She has created a concept store whose main activity is the sale of juice extractors and water fountains. The goal is to create a local agricultural products market and use local producers. A weekly bio basket can also be ordered.

Morgan Cambournac’s project was Soualiga Aqua Park. The concept is simple; put on the water inflatable modules (toboggan, trampoline, etc.) to allow the public to have fun. The park earmarked for Galis Bay will be open to adults and children (accompanied by an adult).

Those present for the ceremony included the President of Initiatives St. Martin Jean-Paul Fischer, emcee Philippe Morel, former Chamber of Commerce President Jean Arnell and representatives of Caisse des Dépôts, and the candidates themselves.
The new Director of Initiatives St. Martin Active was also introduced at the gathering. She takes over from former Director Marc Chakhtoura.