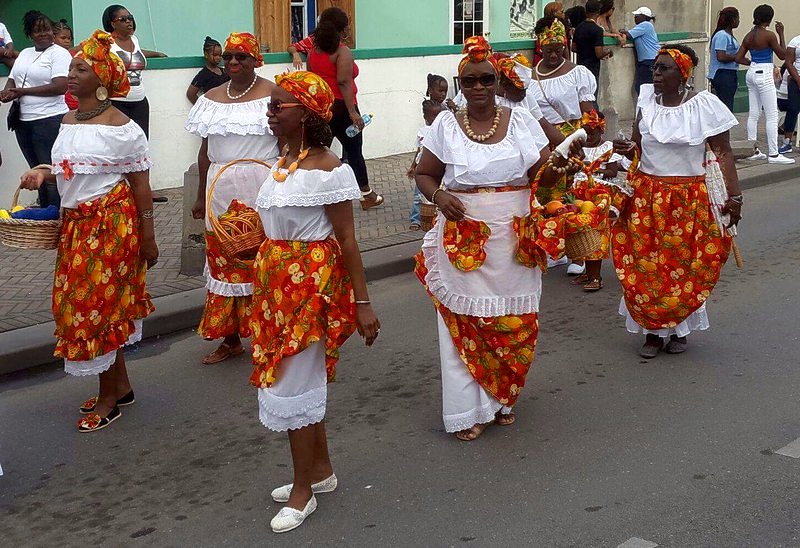 PHILIPSBURG–Our Creations St. Maarten Arts and Crafts Foundation extends an invitation to the public to participate in the Smaatn National Cultural Parade on St. Maarten Day, November 11. The theme for this year is: “Preserving our Heritage and Folklore.” Person interested in participating in the parade are invited to the first general meeting for this year at Philipsburg Cultural and Community Centre on Wednesday, August 30, at 6:30pm.

The Parade took place for the first time on November 11, 2015, with the objective to educate, preserve and showcase St. Maarten’s history, culture, heritage and folklore. “In order to halt the fading away of St. Maarten’s traditions and folklore it is of utmost importance to have the participation of all,” organisers said.

Emphasis during the Parade will be placed on St. Maarten’s folkloric attire, which is not the madras that is commonly used, but floral fabric. The Parade will consist of various sections of folkloric attire such as: flag wear; market vendors; tribute to Yaya; salt pickers; coal; elegant wear; fisheries; cultural wear and more.

Organisers said the concept of the Parade is of a different nature than the Carnival celebrations. “Vulgarity and nudity are not allowed nor promoted. All persons are to wear a folkloric attire of “Smaatn” fitting to the abovementioned sections. No T-shirts, jeans or short shorts will be allowed in the Parade.”

All music to be played must be original songs giving tribute to the island, such as, for example, “St. Maarten is my home,” “Soualiga my number one island” and St. Maarten is nice.” No big sound systems are allowed. The music by disk jockeys and bands must be just enough to cover their immediate surroundings.

At the head of each group the St. Maarten flag must be carried. All groups are to carry a banner of identification of their organization. No foreign flags are to be carried in this Parade, as tribute will solely be paid to St. Maarten. The only flags to be carried are the St. Maarten flag and or the unity flag. The folkloric attire to be worn may not be of foreign cultures, but solely St. Maarten’s folkloric wear, according to Our Creations President Esther L. Narcisco-Williams and founder and coordinator of Smaatn National Cultural Parade Urmain Dormoy.

Registration forms may be obtained from Our Creations Arts and Crafts Home on Front Street 121A. For more information call Dormoy at tel. 581-2912, or Narcisco at 554-2933.